Home » Lifestyle » Coal’s retreat as renewables surge is a shock, but not a surprise Coal’s retreat as renewables surge is a shock, but not a surprise

Calabria was talking after Origin’s half-year profits had been slashed 98 per cent in large part due to power prices collapsing amid an accelerating influx of renewable energy into the grid. 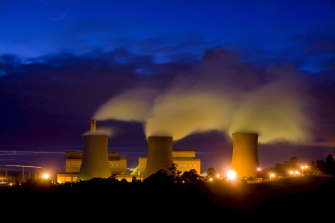 EnergyAustralia’s Yallourn power station in the Latrobe Valley is to close early.Credit:Paul Jones

In this context Energy Australia’s announcement on Wednesday that it would bring forward the closure of the Yallourn Power Station by four years to 2028 was a shock, but hardly a surprise.

In January, Energy Security Board chair Kerry Schott told The Sydney Morning Herald and The Age that Australian industry and governments should co-operate as a matter of “absolute urgency” in developing a plan for the rapid retirement of coal, which she said was good for emissions but would prompt faster coal plant retirements.

By then it was clear that the uptake of rooftop solar and grid-scale renewable energy projects in Australia was in line with the Australian Energy Market Operator’s fastest modelling scenario, anticipating renewables will grow from 37 per cent of the energy mix in 2020 to 63 per cent by 2030 and 94 per cent by 2040.

As a result the most vulnerable of them – the slowest, oldest and least reliable – are forced from the market, he says. In turn more renewables surge in to fill the void and the cycle repeats ever faster.

The problem is that the closure of a vast, old coal-fired power plant can shock the market, as the sudden abandonment of Hazelwood showed in 2017.

Yallourn Power Station produces around 22 per cent of Victoria’s electricity and 13 per cent of its greenhouse gas emissions, which in turn is 5 per cent of Australia’s national annual emission output.

Though EnergyAustralia has ameliorated the potential for price shock by giving long notice of the closure, the industry, energy users and some regulators are crying out for governments to co-operate on national energy policy.

“It’s now time for tough, united decisions. If we keep kicking this further down the road, it’s going to cost us all more for electricity in the future,” said Schott in January.

Even in the absence of a national policy, Jotzo believes that the speed with which energy storage technology is being developed and introduced – everything from batteries to new pumped hydro – is such that the vacuum created by shutting a station the size of Yallourn can be filled in time with renewables backed by storage.

But he says the pace at which coal plants retire will only increase, with each new closure creating another wave of uncertainty.

It needn’t be so messy.

Most Viewed in Environment