The Coalition has promised $833 million a day to electorates around the country since the week of the March 29 federal budget as it goes on a spending spree to hold on to power at next month’s election.

From large-scale dams that have yet to be judged against a business case, to BMX courses and footpaths in must-win seats, the Coalition has announced $23.3 billion in projects in the four weeks since the budget at an average of eight election sweeteners a day. 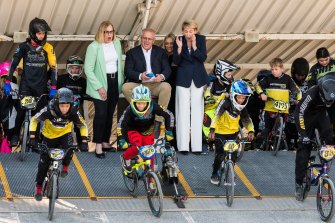 In just four weeks, Prime Minister Scott Morrison has promised more than $23.3 billion worth of projects, including funding for the Wanneroo BMX club.Credit:James Brickwood

Labor has been left behind, offering a “modest” $1.9 billion across almost 100 projects that include assistance to veterans, building a skate park and an upgraded pavilion at a community tennis club.

The Sydney Morning Herald and The Age have been tracking promises made by both major parties since October last year, but there has been a flurry of activity – particularly at the marginal seat level – since the week Treasurer Josh Frydenberg handed down his fourth budget.

That budget confirmed the country’s third-largest deficit at $80 billion this year after the two largest deficits over the previous two years. Gross debt is expected to reach a record $1.2 trillion by 2025-26 with the budget not projected to get back into surplus this decade.

Despite the red ink, both sides of politics continue to make wide-ranging and politically targeted commitments.

In several seats, promises made by one side have been matched soon after by the other.

In the knife-edge marginal seat of Chisholm, Labor promised $2 million to upgrade a local sporting centre on April 9. Four days later, the Coalition pledged $3 million towards the same project.

In the most marginal Liberal seat of Bass, both parties promised on Saturday promised to give a medical research organisation $4 million for an expansion, while on Friday both sides committed $6 million for a new basketball stadium in the Adelaide seat of Boothby.

Prime Minister Scott Morrison made the marginal NSW South Coast seat of Gilmore his first stop in the official election campaign to promise $40 million in local road upgrades, which was immediately matched by the incumbent Labor MP. 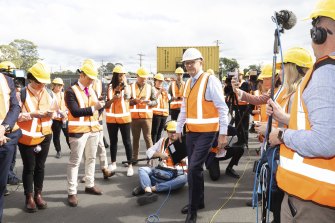 Over in Western Australia, where the Coalition is defending up to three seats, a $390,000 Labor promise to improve a local park in the seat of Swan was matched two days later. A sports club in the seat of Pearce, previously held by former attorney-general Christian Porter, has been promised $5000 by the Coalition for air-conditioning while Labor has committed $250,000 to the same club for a synthetic bowling green.

On Sunday, Labor announced a $519.2 million package to support veterans. Almost half that money would fund a staffing boost for the Department of Veterans Affairs to clear the backlog of claims, but it also includes 10 veterans’ wellbeing hubs around the country.

There are six such hubs already running after Morrison promised them as a pilot scheme during the 2019 election. Labor announced the first of its planned expansion sites in early March.

Morrison announced on Friday the government would add 14 veterans’ wellbeing hubs to the network. His pledge matches at least four of the sites Labor had already promised.

The chairman of the Evidence Based Policy Research Project, former NSW Treasury secretary Percy Allan, said in a democracy it was very hard to avoid promises and funding for projects being compressed into the timing of an election cycle.

But for taxpayers to be reassured their money was being spent as wisely as possible, he wants parties to include a statement of public interest with every promise. This should address the objective, need, alternatives and costings, why this option was chosen, who was consulted, and how and when it would be completed.

“If they can’t answer those very basic questions – they’re just public management 101 questions – then they really haven’t thought it through. It’s another brainwave. It’s just a bubble which they’re running with, and they’ll get themselves into trouble,” Allan said.

He also warned the record deficit and mountain of debt meant it was even more important for leaders to be prudent with taxpayer funds.

“When we’re starting to make promises, we’ve got to be really careful – what is all this going to cost and how are we going to pay for it? And neither side wants to address that,” he said.

Dr Shumi Akhtar, from the University of Sydney’s business school, said without details about the source of funding or how projects would be implemented, the promises from both sides remained “very illusory” and voters should look critically at them.

“The important thing is not to be swayed by those dreamy economic improvement and management promises, but rather look out for what strategy each party has to offer regarding the source of funding these grand promises and what timeframe they have for implementation,” she said.

Across 18 key marginal seats – nine currently held by each major party – the Coalition has comprehensively outspent and out-promised Labor in all but five.

Out of these seats, the largest Coalition promises benefit Boothby, where sitting Liberal MP Nicolle Flint is retiring. Labor won a huge swing in the corresponding state seat and is hoping to replicate this federally.

But the Coalition is guarding its 1.4 per cent margin with more than $2.5 billion promised since October. The bulk of this is $2.2 billion to complete a road upgrade, which Morrison announced in the seat in February and funded in the budget.

Labor-held McEwen is next on the list, with the government promising almost $1.5 billion worth of projects including a $1.2 billion freight hub for the fast-growing seat on Melbourne’s northern outskirts.

Similarly, a faster rail line and upgrades to the Pacific Highway on the NSW Central Coast bring the promises for Robertson to more than $1 billion.

Labor has pledged more than the government in Liberal-held Longman, Braddon and Reid and its own seats of Corangamite and Cowan.

Corangamite on Victoria’s Surf Coast had the distinction of being the most pork-barrelled seat in the 2019 election. The Liberals hope to win it back from first-term Labor MP Libby Coker this time, but the spending isn’t as high as other seats yet.

Labor has promised $155.6 million in the seat, with $125 million of that being a road duplication project. The Coalition has offered almost $50.4 million, including money Morrison personally announced for upgrades to a year-old basketball stadium.

Last year, a special analysis by The Herald and The Age of how discretionary government grants were allocated over the past three financial years found huge discrepancies between electorates with many marginal seats being singled out for special attention.

Braddon in Tasmania received the second-highest amount of grants funding in the country, with more than $83.4 million spent there. Already in this election cycle, each party has promised more than $32 million for the electorate.

Inside Will Smith and Garcelle Beauvais' Short-Lived Romance
Recent Posts