The Coalition is facing an internal battle over using the earliest budget in federal political history to either repair the nation’s finances, pulled apart by the coronavirus recession, or use it to woo back disaffected voters in a last-ditch vote-buying spree.

Both the Coalition and Labor are considering whether to offer personal income tax cuts as an election sweetener in a move that would increase the size of a deficit that despite the strengthening economy could reach $100 billion. 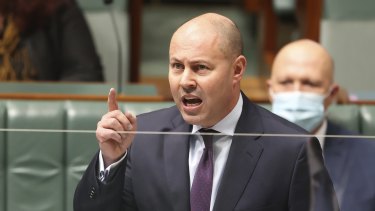 Federal Treasurer Josh Frydenberg will deliver the earliest budget since Federation, with pressure growing on him to outline how the budget will be repaired.Credit:Alex Ellinghausen

No government has gone to an election promising such large deficits. The government is also forecasting gross debt, currently at a record $860 billion, to surpass $1.2 trillion by the end of the decade.

Internally, the Coalition is debating how much extra spending it can offer at the March 29 budget given the size of budget deficits and government debt while maintaining its attacks on Labor over economic management.

Prime Minister Scott Morrison told Parliament on Tuesday that the budget would be “absolutely critical to the economic recovery” of Australia.

Treasurer Josh Frydenberg – who accused Labor of taking $387 billion worth of new taxes to the 2019 election – attacked Opposition Leader Anthony Albanese for holding back policy proposals.

“We know this weak Labor leader does not have the courage to come clean with his policies to the Australian people,” he said.

But a senior member of the Coalition, who was not authorised to speak publicly, told The Sydney Morning Herald and The Age that the pressure to start repairing the budget was growing within the Liberal party.

They said the early budget was a test for Mr Frydenberg, to show his budget-repair credentials.

“This budget isn’t about Scott Morrison. It’s about Josh Frydenberg and Peter Dutton, and who is better in returning to the fiscal conservative position of the party,” they said.

“If we get to February or March and it looks like it’s getting harder and harder for the government to win, then I’m worried about where we might end up.”

The early budget means the upcoming mid-year fiscal update, to be released later this month, is now not expected to contain any major policy initiatives.

A key issue for the budget is the affordability of tax cuts. The low and middle income tax offset, worth up to $1080 to 10.2 million people, is due to expire in the 2022-23 financial year.

It was extended into this financial year by Mr Frydenberg in the May budget at a cost of more than $7.5 billion.

Extra tax cuts or any other election-focused spending could be at odds with the budget rules set out by Mr Frydenberg in this year’s budget.

In May, the Treasurer said he would swing to budget repair once “the economic recovery is secure and the unemployment rate is back to pre-crisis levels or lower”. The repair would focus on trying to balance the budget by controlling spending, making structural reforms to boost economic growth and keeping the tax-to-GDP ratio at or below 23.9 per cent.

The early date of the budget means Treasury and the government will not have access to key economic releases, such as the March quarter consumer price index. It will also pre-date the April meeting of the Reserve Bank board.

He said with the economy on the mend, the Coalition should at least hold back on extra spending.

“When the economy was weak and in lockdown, there was nothing wrong with going into debt. That was the right thing to do. But if the economy is strong and growing, then you have to start looking at ways to repair the budget,” he said.

“The automatic stabilisers should be allowed to kick in. But there’s clearly some structural deficit issues in the budget and they need to be addressed.

“We can’t go on for the rest of the decade with budget deficits.”

Are Michelle Young and Her Winner [SPOILER!] Still Together?