Home » Lifestyle » Can you fake being an extrovert? Can you fake being an extrovert?

My friends at university threw me a surprise party for my 22nd birthday. As soon as everyone jumped out of the dark, I burst into tears. They thought I was touched. Actually, I was horrified. I had nowhere to hide. How long until they left?

Twelve years later, I know that I feel this way because I'm an introvert. Actually, I'm a shy introvert, and any shy introvert has invariably done the following: faked being sick, walked into a networking event and immediately backed out, and pretended not to speak English when approached in a bar. 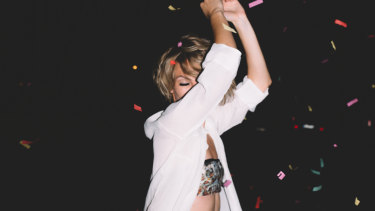 It would be like jogging: sweaty anduncomfortable but possibly good forme in the long term. Credit:Stocksy

I would say 90 per cent of my acquaintances don't know that I'm an introvert because I take such pains to hide it. After-work drinks? Sorry, I'm busy. Lunch at the pub? Can't, I have plans (eating ramen alone in blissful solitude). Co-workers think I have a full social calendar (not true). Meanwhile, my husband Sam doesn't really get it, because he's a different breed – a quiet person who likes going to the pub and hanging out at festivals. But he's grown used to most of our nights out ending with me hissing, "Get my coat and meet me by the lifts!"

Nearly a third of the population (depending on which study you consult) identify as introverts. As a kid growing up in Texas, I didn't understand why I felt so differently about life compared with my extroverted family. My parents love chatting to new people. My two older brothers were always inviting big groups of their friends over to our house. I thought there was something deeply wrong with me.

Still, I dreamt of a bigger life full of new experiences, and after university, I moved to Beijing, then Australia, and eventually London. But one thing stayed constant: no matter how farflung the lands, I remained essentially a shy introvert. My disposition is one reason I became a writer, and it meant that I had very close relationships with my small group of friends. Then, in the space of a year, it all went wrong. I became unemployed and my closest friends moved away. My career stagnated; I was lonely. I had no idea what to do next.

I had a lot of time to ponder: what did I want from life? I wanted a job, new friends I felt truly connected to, and more confidence. So what were other people out there with jobs and close friends and rich, fulfilling lives doing that I wasn't? Eventually, and with mounting fear, I realised: they were having new experiences, taking risks, making new connections. I knew what I had to do.

I would talk to new people. I would travel alone and make new friends on the road. I would say yes to social invitations. I would go along to parties and not be the first to leave. It would be like jogging: sweaty and uncomfortable but possibly good for me in the long term. In other words, I would become an extrovert. I gave myself a year.

CHALLENGE 1: THE 'HOW TO BE SOCIABLE' WORKSHOP

The man sitting next to me is good-looking. We glance sideways and lock eyes. I take a deep breath. "I live far away from my parents, and I can't bear for them to know that sometimes I don't know what I'm doing with my life," I say. He blinks. And then says, "I haven't seen my family in 10 months and I don't miss them and I'm afraid that makes me a bad person.

Chris and I both signed up for the same workshop. The advertisement promised that it would teach us how to make better connections. Neither of us knew this meant confessing humiliating, personal secrets to strangers. "If what you're saying makes you feel like a loser, you're doing it right!" shouts our group leader, Mark, encouragingly

The class is called "How to Be Sociable at the School of Life", the brainchild of author Alain de Botton. It takes place in a basement and there are about 40 people of all ages present.

Mark tells us to talk to each other. But, he stresses, not just everyday small talk, but deep, meaningful conversation. We're told that we can engineer conversations to be more emotional and interesting by understanding we all have a Surface Self and a Deep Self. The Surface Self talks about the weather, facts, what we had for dinner, our plans for the weekend. The Deep Self talks about what these things actually mean to us and how we feel about them.

Mark shows us a short video of a dinner party to demonstrate. In it, a man describes his commute before asking the woman across from him what she studied at university. This is an example of "shallow conversation". It feels eerily familiar.

As Mark had predicted, I form a connection with Chris. The shared emotional turmoil means that despite having only just met, I feel a kinship with him. The class has been an emotional roller coaster. But I feel like I've been given a new outlook. It's okay to go deep. It's okay to share our worst failings. In fact, it's encouraged – and it feels great.

CHALLENGE 2: STRIKING UP A CONVERSATION WITH STRANGERS

I'm walking through a park and vow to start a conversation with one complete stranger. Suddenly a lively brown Labrador puppy stops to say hello and as I'm nuzzling its soft ears, the owner – a tall older man in glasses – appears and yells, "You talk to me first, then you can pat the dog!"

Terrified, and embarrassed at my unsolicited petting, I hurry away.

Disheartened but still determined, I try again later when I'm in a cafe. Approaching a communal table, I grab a seat and turn to a woman who is shaking off her umbrella. I take a deep breath, smile and say, "Hi, how are you?"

"Great, I'll have an oat latte please," she replies, looking down at her phone. Mortified, I tell her I don't work here and she looks at me as if I'm insane. I slink off to a different table.

But a few weeks later, I board a train from London to Paris. My window seat is next to a Frenchman in his 70s. I'd planned to stare out the window, or read, but the peace is being violated by an extremely loud woman in her 20s shouting at her friend.

I glance at the older man sitting next to me. He's looking at his tray table, also frozen by the inane, shouty conversation. If I don't talk to him, we're going to have to endure this for the entirety of the journey.

Stacked on his tray table are four books, most of them about Kafka. What can I say to him? "Are you a professor?" I ask. He turns to me, surprised. "I was," he says, in heavily accented English. I gesture at his books. "Are you a writer?" I ask. He tells me yes, he is a writer. His name is Claude and he writes art criticism.

We keep talking and he starts to tell me about his mother when I ask him where he grew up. Then he stops. "The thing about my mother is …" He pauses and looks at me. He tells me that he didn't know his mother was Jewish, that she kept it a secret during the war because she was afraid of the Nazis, and he only found out he was Jewish after she died. He doesn't know who his father is. I'm stunned he has told me.

Claude and I continue to talk for the entire journey. We disembark together. As we walk out of the station, I feel overcome with an excited rush – I can't believe I made such a deep connection with a total stranger.

Bumble, the dating app, now has a feature that matches you with new friends. These days, it's the norm to meet romantic partners via apps. So could I use them to find my new best friend? On my profile, I write that I like live comedy and plays, as well as spicy food, good cafes, and books. Then I'm swiping.

Most of the conversations are friendly but banal. There are women who simply don't reply. Then a woman with long, dark hair appears. She's elegant, 44 years old. A novelist named Abigail. I swipe right on her. Ding! She sends me a message. "I've never done this before, do you want to get coffee? If it's bad, it'll make a funny story, at least." I message her back, "Yes! Let's do it!"

Days later, I'm getting ready for my first friend-date. I'm nervous. In romance, potential suitors can pretend you have no chemistry. But because we can have as many friends as we want, being rejected is brutal.

I walk into the cafe and spot Abigail sitting in an armchair in the corner. She stands up and gives me a brief hug. We immediately start talking about writing – she's working on her second novel. She's open about how difficult she finds writing the first draft. She's honest and warm.

She talks candidly about her recent divorce, mentioning that her ex-husband has a new girlfriend, so I take the cue and ask if she's started dating again. Abigail nods. "Unsolicited dick pics are a very real thing," she jokes.

Later, I walk out of the cafe on a high. I feel confident that by the end of this experiment I'll have at least 10 new best friends.

Only my next friend-dates don't go as well. One cancels. Others just don't click. Then, just as I'm losing heart, Abigail gets in touch and wants to hang out again. We decide to go swimming. Afterwards, she invites me into her house to give me a book. A few months ago, this woman was a total stranger; now I am in her house, discussing writing. I can tell my year is already changing me.

By the end of the year I have been to networking events, improv classes, performed comedy on stage, been on many more friend-dates, travelled solo and met new people along the way – I even threw a dinner party for my new friends.

It was fear that if I never changed I would never know what it was like to live a bigger life that propelled me. I'd spent most of my life telling myself I was one kind of person, not believing I could do things that I saw other people doing. Then I spent a year doing all of those things that petrified me. A small part of me thought I'd undertake all these challenges and emerge as a socially savvy, articulate, gregarious social butterfly. Or wind up hiding in a ditch. But I am still who I was at the beginning of this year. Only I know more now.

Extracted and abridged from Sorry I'm Late, I Didn't Want to Come (Doubleday) by Jessica Pan, out now.

This article appears in Sunday Life magazine within the Sun-Herald and the Sunday Age on sale July 28.