Hopes local companies will fill their shortages of skilled workers with migrants could be stymied by the tight global jobs market with new research showing Australian businesses face a tough fight against international competitors.

Data compiled by online jobs site business Indeed suggests it may not be easy to entice skilled migrants away from their home markets or prevent them going to other nations offering larger paypackets. 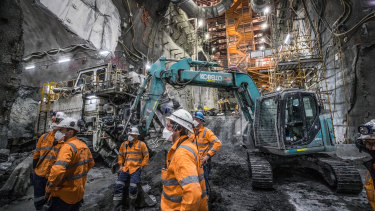 Australia may find it difficult to woo as many skilled migrants as businesses hope due to global competition.Credit:Jason South

The international border is due to open on Wednesday for skilled migrants and international students in a development the business community is hoping will ease wage pressures and fix worker shortages across a growing number of industries.

International student arrivals are down 99.7 per cent on their pre-COVID levels while skilled visas were down 44 per cent through 2020-21 on the previous year. Those granted visas were almost exclusively in the country before the international border was shut early last year.

Indeed senior economist Callam Pickering said while there were some early signs of a lift in interest from prospective skilled migrants, the market was very different to the pre-virus world.

“The challenge for Australia will be attracting highly skilled workers in a tight and globally competitive labour market,” he said.

“Jobs in many economies, including those from places where Australia traditionally attracts talent, are now tighter than before the pandemic. Australian businesses will need to be proactive in attracting overseas talent if they are to compete successfully against other countries.”

Overseas jobseekers accounted for 6.4 per cent of the clicks on Australian job postings between January and October this year, up from 5.7 per cent in 2020 but still short of the 6.7 per cent rate recorded in 2019.

Clicks have fallen most for positions in high education occupations such as banking and finance, engineering, information design, scientific research and mathematics.

But interest in blue-collar jobs such as installation and maintenance or in manufacturing has lifted compared to many other occupations. High level of interest has remained in medical and construction fields.

Mr Pickering said almost 40 per cent of Australia’s skilled migrants came from Britain and India while another sizeable proportion came from The Philippines. 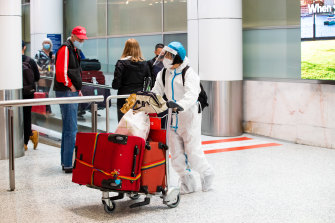 Australian businesses are counting on the reopening of the international border to help fill skilled job vacancies.Credit:Edwina Pickles

He said these countries were also experiencing a tight jobs market, which may make it more difficult to attract migrants to Australia without substantial financial incentives.

Mr Pickering said the temporary skilled visa program will ramp up as the borders reopen but it could be easily derailed by fresh virus outbreaks.

“The recovery though still has a long way to go and could potentially be delayed by the emergence of the Omicron variant,” he said.

Figures from the Australian Bureau of Statistics this week are expected to confirm a surge in the number of people coming back into the workforce before the re-opening of the country to skilled migrants and international students from Wednesday.

Commonwealth Bank economists are expecting the jobless rate to have fallen from 5.2 per cent to 4.7 per cent in November with the creation of 250,000 jobs across the country.