Union bosses and business lobbyists made last-minute pitches to One Nation and Centre Alliance senators on Tuesday as the fate of Australia’s casual workers shaped up as the clincher for a deal on overhauling industrial laws.

The trade unions want much tighter rules on who can be classified as a casual worker because they argue too many Australians lack job security, while businesses say many employees like being casuals because it gives flexibility for family time and study. 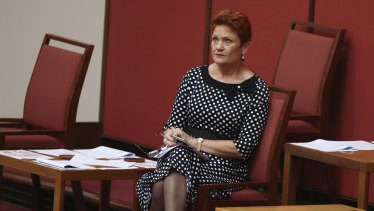 One Nation leader Pauline Hanson is in the box seat on industrial relations.Credit:Alex Ellinghausen

Courts have ruled that “casuals” doing regular and systematic hours for long periods are actually permanent workers entitled to backpay, a stance the government is trying to largely reverse to ensure businesses have the certainty to take on staff.

Under the bill before Parliament, which the government wants passed this week, those offered work as casuals and paid as such will legally be casuals. The 25 per cent loading most casuals receive in lieu of paid leave entitlements would be deducted from any backpay claims.

One Nation had planned to release its demands to the government on Tuesday but will instead do so at 1pm on Wednesday. Party leader Pauline Hanson indicated she wanted small businesses in particular to be able to keep employing casuals on regular hours long term.

“I’ve been in small business myself … I had people come in, same hours every week, week in, week out, year in, year out, and to me they were still casuals,” Senator Hanson said.

But One Nation has also demanded the government allow casuals the chance to convert to permanent work after six months.

Employer sources, who spoke anonymously because the discussions are sensitive, were cautiously confident One Nation would back the laws with changes the government could accept.

But Centre Alliance’s Stirling Griff, who could provide the third Senate crossbench vote the government needs to pass its bill, has proposed a set of changes and outlined sections he will not support but not made his demands public.

One employer lobbyist described changes proposed by Centre Alliance Senator Stirling Griff as transforming parts of the government’s plan into a “Labor bill”.

Independents Jacqui Lambie and Rex Patrick dealt themselves out on Monday, at least for the time being, by proposing an amendment that strikes out almost all of the government’s bill.

Senator Patrick said it was now up to One Nation and Centre Alliance to “get it right” in their negotiations with the government.

Employers including the Australian Restructuring, Insolvency and Turnaround Association urged the crossbench to back the bill on Tuesday, saying a failure to do so could cost “a massive number of jobs”.

John Winter, the association’s chief executive, reasoned that struggling firms could be forced into liquidation if they factored in the potential hit from backpay claims from casuals.

“This risk may see directors decide to shut down their businesses to avoid any such personal risk, costing the employment of their staff,” Mr Winter wrote.

One struggling dry cleaner from Melbourne, who spoke on condition of anonymity, said he was already facing the consequences of uncertainty over which of his workers were classed as casual.

The dry cleaner said he was facing a backpay claim of tens of thousands of dollars from a woman who he had previously offered to make permanent but she declined. “I’m at my wit’s end,” he said.

ACTU secretary Sally McManus said claims of catastrophic backpay cases were motivated by “self-interest” and issued a threat to the crossbenchers wavering on the bill. The Democrats, Ms McManus said, had backed the Howard government’s 1996 industrial relations bill.

“Well a party called the Democrats is no longer around,” she said. “People judged them for supporting reductions in workers’ rights.”