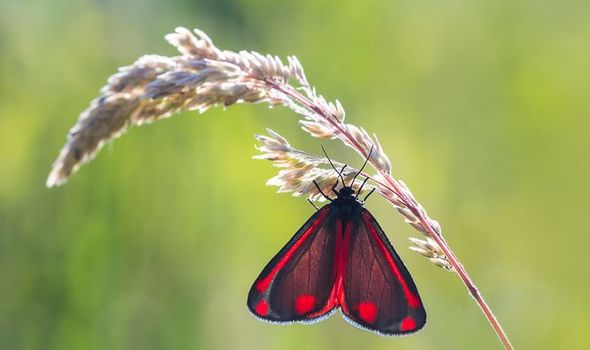 But when I flicked through James Loewen’s British Moths this week I was blown away by the beauty and variety of nature’s forgotten insects. This guide to our 350 commonest species — out of 2,500 — shows them in their true colours.

The loudest of all is the elephant hawkmoth, below, which is pretty in pink. More than an inch long, this brute boasts a shocking pink undercarriage and wings patterned with olive and yet more pink. It is common in gardens but most of us never see one because it is a creature of the night.

Just as striking is the cinnabar moth, right, whose black and red combo reminds me of Manchester’s City classic away strip. It can be found all over the country and should be thriving as its orange and black caterpillars love that roadside staple, ragwort.

Another night flyer is the Large Emerald, which is a triumph in green. Then there is the Peppered Moth – a byword for rapid evolution, thanks to its dark and pale forms.

In the days of dark Satanic mills the dark form dominated as it blended into sooty backgrounds.

Now that the air is cleaner the paler form is more common.

Most of these moths have finished their flying season but still on the wing is the Merveille du Jour, which has peppermint and pea-green wings liberally patterned with black. Despite its name, it flies at night.

But others, such as the migratory hummingbird hawk-moth and the black, red and cream Scarlet Tiger, fly happily in daylight.

Get the latest three-day weather forecast where you live. Find out by adding your postcode or visit InYourArea

This day-night split must cause romantic problems for a butterfly which sports four “eyes” – one each on its brown and pink forewings and its orange hind wings.

The male Emperor moth flies by the day and the female at night. Dusk must be their frisky time.

Plumes are tiny T-shaped moths with wings so narrow it is hard to see how they fly. The smaller Gracillaria syringella sits up like a praying mantis and the Chinese Character looks like a Portuguese Man O’ War jellyfish.

Moths are important pollinators and food for creatures such as bats yet their clothes munching habits have got them terrible PR. But, explains James, only two species out of 2,500 pose a threat to your woollies. So give moths a chance.

Save energy and cut bills by putting fridges, freezers, washing machines and driers on eco-mode if they have it.

A different kind of meditation

Life has been so frantic that I’ve barely had time for my ideal therapy – birdwatching.

At last, I got out to my local gravel pits and as I watched young grebes, coots and ducks, a small dark bird flew like a bullet, low over the lake.

I got it in my binoculars and it exploded into colour – flashing its blue back and, as it tilted over the reeds, its brick-red tummy.

It was a kingfisher, soon joined by another which harried it round the lake.

Beauty, drama and mission accomplished. I’ve got my mojo back.