HAVING a great wok can really transform your cooking, helping you to make tasty, healthy meals quickly.

We tried a range of options to find the best woks you can buy right now. 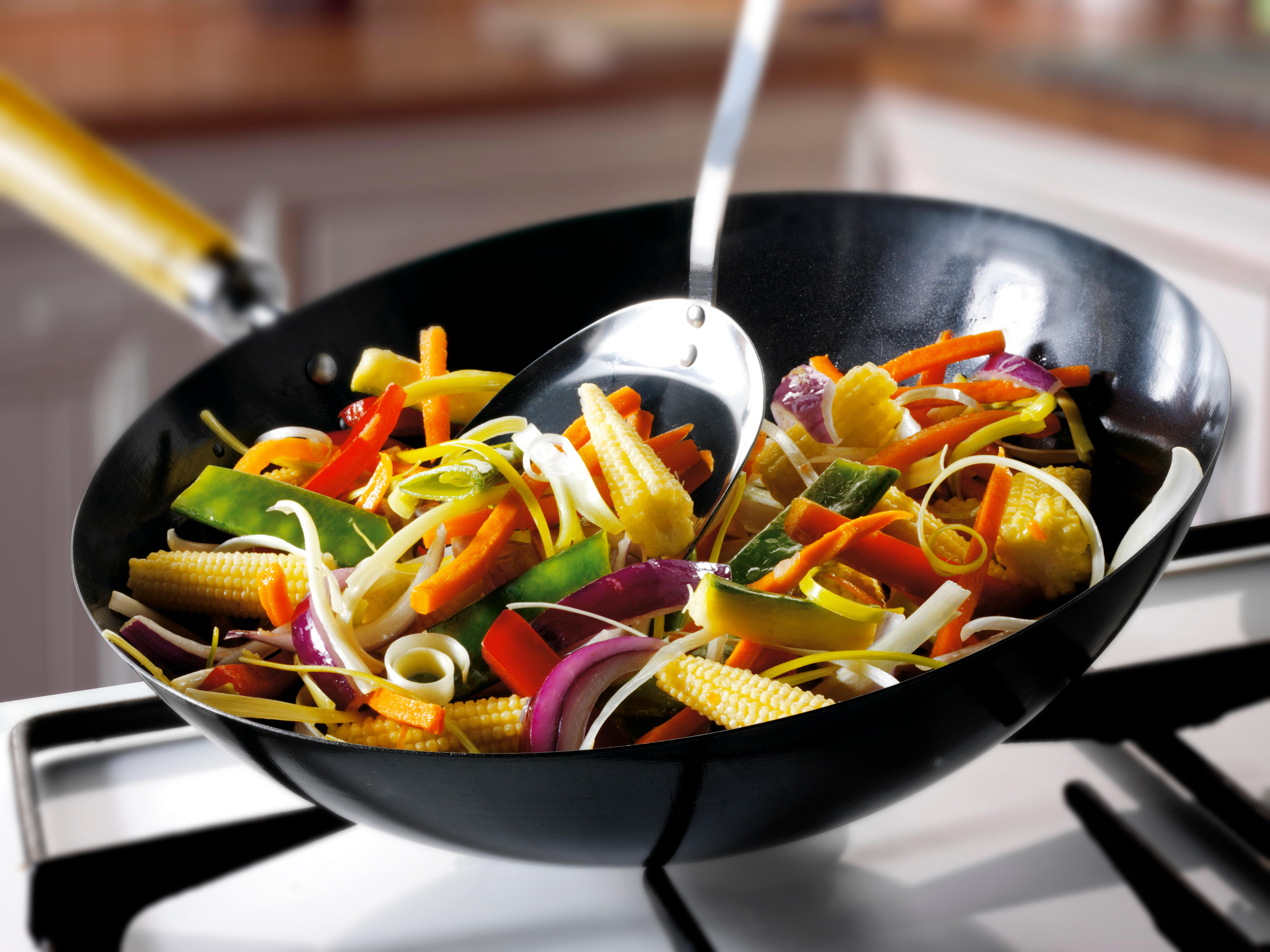 While woks are traditionally associated with quick and easy stir frys, they can also be used for everything from braising and deep frying to steaming and even baking.

But with so many variations on the market, how do you know which one is best for you?

Here, we’ll explain some of the things to think about when choosing a wok, what material and shape is best, how to care for it and the best woks you can buy now.

What should you look for in a wok?

Before you choose your wok, you need to think about what you’re going to use it for and how you normally cook.

If your wok is mainly going to be used for stir frys, you’ll want one with a longish handle to keep your hands away from splashbacks, especially if you plan on tossing the contents of the pan.

When you lift it up, the wok needs to be well balanced, so it doesn’t tilt and spill your food everywhere.

And ideally there's a small second handle on the other side so you can lift the pan with both hands if you need to.

If you want to use the wok for stir frying, but don’t plan on tossing its content – it can get very messy after all – then a wok with two short handles will work just as well and it might be easier for storage.

You might also want a wok that comes with a lid if you want to do any kind of braising or steaming in it.

In terms of size, it will depend on the shape of the wok but you'll want to look for one that’s around 30cm for one or two people, and 35cm if you’re cooking for a family of four or more. If you're cooking a few dishes for a feast then a smaller wok is fine.

Finally, just like an oven, you’ll want a wok to distribute heat evenly rather than concentrated at the base. 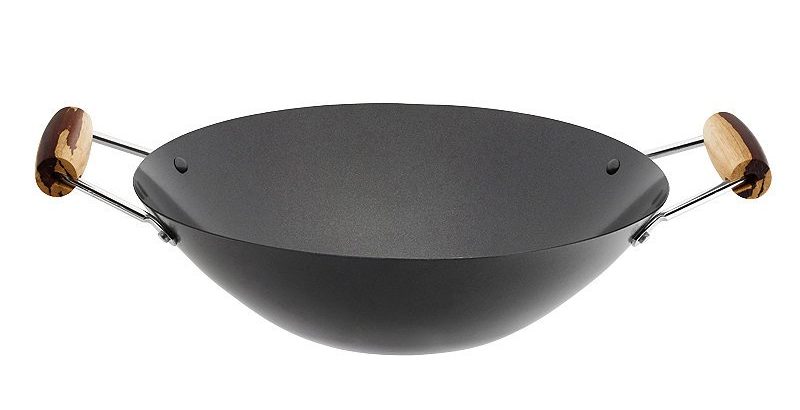 Prue's World dual handle wok, an exclusive from GBBO judge Prue Leith for Lakeland, has to be the most stylish of the woks we tested – it’s one that you’ll be tempted to bring from the kitchen to the dinner table.

At 31cm, this carbon steel wok is also a really good size. It heated up quickly, giving food a really satisfying sizzle as it hit the pan.

We also love that it came with a tempura rack, making deep frying easier, and there’s a matching lid if you need to simmer or braise. These nifty extras make it a really nice all-rounder in the kitchen. 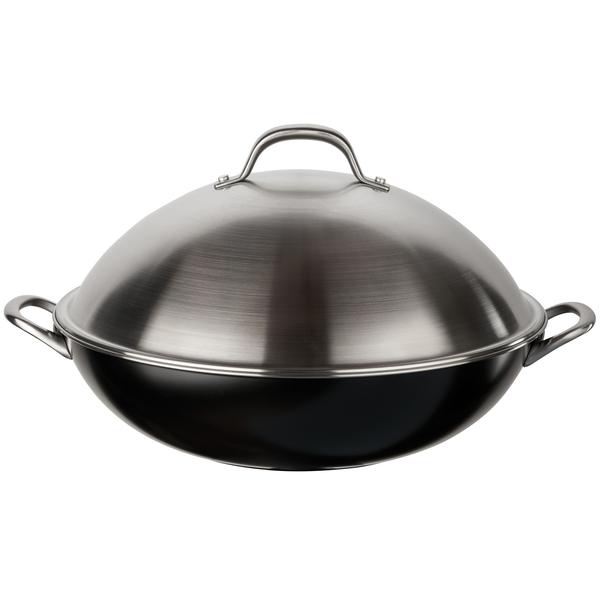 This was the biggest wok we tested at 36cm – it will take up most of your hob space on a four-ring cooker but there’s enough room to cook for the whole family.

Because it’s so big, we found it took a lot longer to heat up to a good temperature compared to some of the other woks we tested.

But that fact, and its size, is to its advantage if you tend to cook meat or whole fish rather than quick veggie stir frys. It's also pretty much impossible for food to escape the pan.

The wok retains heat really well, and it comes with a domed lid, which is great if you want to use it for steaming too – just get a bamboo steamer that will fit inside.

It’s on the pricier side, but it does come with a lifetime guarantee and you can use metal utensils on it. 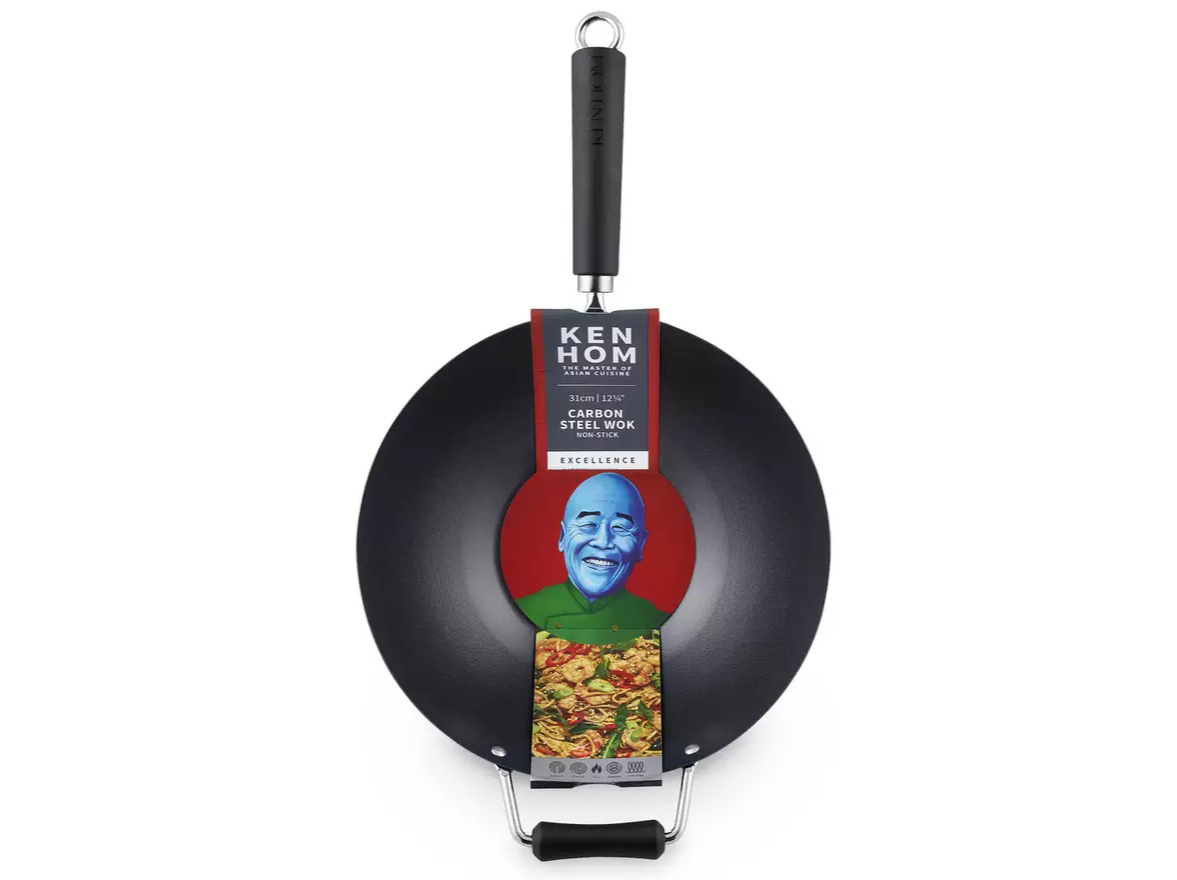 A legend in Chinese cookery, Ken Hom needs no introduction. Neither dp his woks really – one estimate has it that one in seven households in the UK owns a Ken Hom wok.

We tested the 31cm non-stick wok from the Excellence range, which you can use metal utensils on, and found that the food glided around the wok so easily you hardly needed any oil.

In fact, it was the only non-stick wok we found that had almost a glass sheen on it – all the others were rough to the touch.

The shape and the long handle means you can easily pick it up and toss the food in your wok – although this is less effective if you’re using an induction hob.

The clean up is also easy, as you can just pop it in the dishwasher.

One thing we did notice was that soy sauce can cause staining of the wok – it doesn’t seem to affect the non-stick quality but can obviously be alarming.

At 28 cm, the ProCook Gourmet non-stick wok was on the smaller end of the woks we tested. It has a wider, flat bottom, which helps increase its capacity, so there’s no chance of food spilling over the side.

It worked great on an induction hob – the pan came up to temperature very quickly and the food cooked evenly – although it’s not suitable for hot plate hobs.

We especially liked the fact that the wok is oven safe up to 260C so for something like steak, you can sear it in the pan and then pop it in the oven to finish.

ProCook Professional Anodised wok is very similar to the ProCook Gourmet non-stick wok with one key difference – the anodised interior, which makes the pan more durable. This is reflected in the fact that it has a 25 year guarantee versus the Gourmet wok’s 10.

Even though the shape and size of the two woks were virtually identical, we found that the Professional Anodised wok was better for searing and did this quickly and evenly.

Like the Gourmet wok, the Professional Anodised wok is dishwasher friendly and oven safe up to 260C, but it’s not suitable for hot plate hobs.

The Stellar Forged wok is another stylish option – the non-stick coating almost has a navy tinge to it and there’s a lovely honeycomb lattice on the base.

We were worried that food and sauces were going to get trapped in the lattice and burn but it doesn’t seem to have happened, at least for shorter periods of cooking where the food is constantly being moved around like when stir frying.

The clean up is fairly easy – just soak the wok if there’s anything stuck on it and then clean with a non-scratch brush or pop it in the dishwasher.

It also comes with a lifetime guarantee with a 10-year warranty on the non-stick coating. 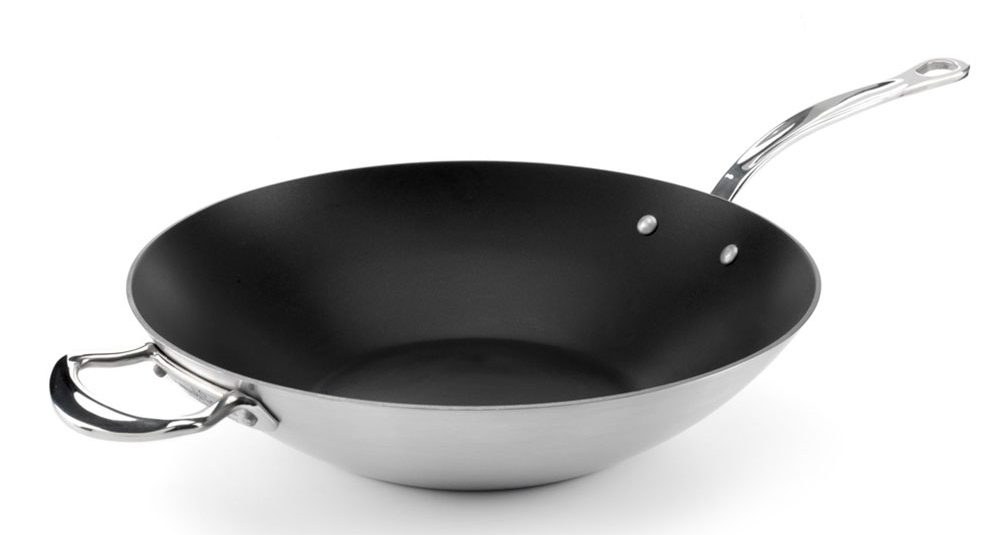 Top of the range of the woks we tested was the Samuel Groves Tri-Ply stainless steel wok, which at £170 is extremely pricey.

You get a seriously stylish piece of kit, though – the entire exterior is shiny stainless steel, with metallic handles – and it’s clear it’s a pan that’s meant to be displayed. It even comes with its own hessian bag.

The wok was developed with professional use in mind, so you can expect it to withstand the test of time – to that end, it comes with a lifetime guarantee.

While it's a good size for small families at 32cm, it’s a lot more shallow than some of the other models we tried. It coped with chow mein for two, but it might struggle with bigger loads.

It’s also quite heavy, so should be used with care, especially on glass-topped hobs.

Should you buy round or flat bottomed woks?

Traditionally, woks have been round bottomed with an almost domed shape that’s designed to be used with gas cookers. You’ll need a wok ring to help it stay in place while you’re cooking.

But if your hob is electric, ceramic or induction, you’ll need a flat bottomed wok. For induction especially, a wok with a wider flat bottom works better.

You still want a nice curvature in the wok so food can move easily around the pan, without spilling out the side.

What’s the best material for woks?

There are a range of different materials for woks, ranging from carbon steel, cast iron, and stainless steel to aluminium, ceramic and granite. Some can have a non-stick coating and some are naturally non-stick.

Chefs and those who regularly stir fry tend to favour carbon steel as it’s relatively lightweight, conducts heat well and will last a lifetime if cared for properly. Plus, you can use metal utensils on it.

The downside is that it requires a bit of extra care. You’ll usually need to “season” it before you use it for the first time (if it hasn’t been already), which means washing it, heating it up, washing it again and heating it up again after applying a fine coat of oil.

Then each time you use it, you’ll need to wash it, dry it and apply a fine coating of oil to keep the rust at bay. Over time, this process will develop a non-stick coating that improves with use.

Cast iron tends to be heavier and more expensive, and it needs to be seasoned before use as well to help it develop a non-stick coating. Like carbon steel, it can also last a long time if cared for properly.

But while it retains heat well, which can be handy for stewing, it doesn’t react as quickly to changing temperatures so it’s harder to control the heat when you’re cooking stir frys.

Carbon steel woks and pans made from other materials can also have a non-stick coating.

These don’t need any special treatment, which is a huge time saver for most home cooks. Just remember not to use metal utensils or anything abrasive when cleaning it.

But even with care, the non-stick surface will eventually wear out, which means you’ll need to replace it every few years, especially if you regularly use it to cook stir frys.

We've rounded up the best Dutch ovens around if you're looking to make a perfect casserole.

And we've selected some of the best air fryers if you want a healthier way to get crispy food.