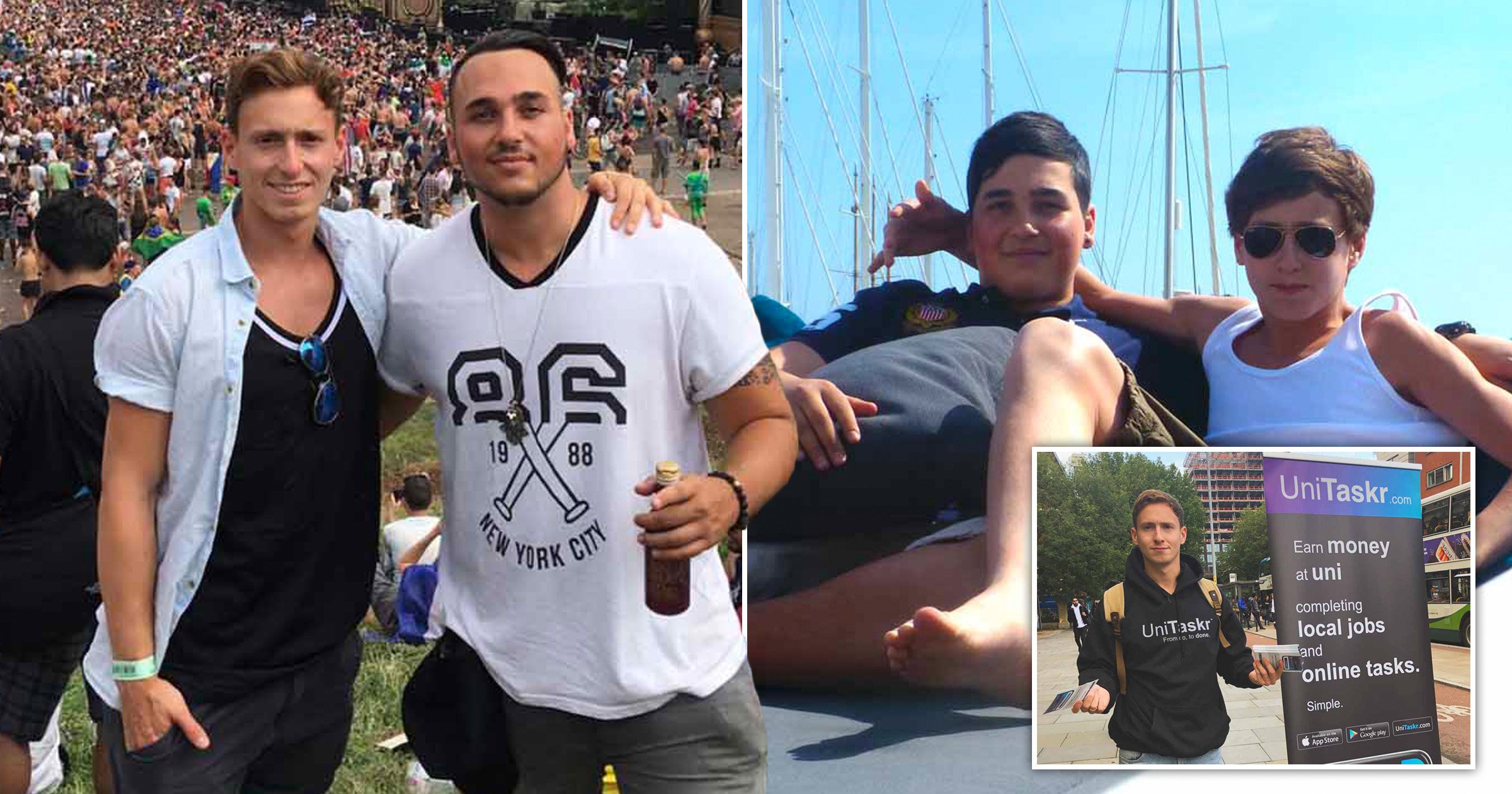 When best friends Oliver Jacobs and Joseph Black, both 25, began selling sweets and fizzy drinks to their fellow pupils at Aldenham School in Hertfordshire back in their teen days, they couldn’t have dreamed they’d have set up one of the most successful freelance work apps by the time they were in their early 20s.

In that time, their business venture has accumulated 190,000 members, a staff of 20, a six-figure revenue and offered £10.7million worth of jobs to UK students.

Despite always being money-minded – at 14, Oliver was designing loft-conversations for neighbours while Joseph was selling golf-balls in Spain during his school holidays – the duo say they didn’t create UniTaskr with the aim of making money.

‘We really want to make it so that no student ever has to leave university because they can’t make ends meet,’ said Joseph.

‘We don’t want students to lack the opportunity to have the experience of going to university and expanding on their talents, just because they can’t afford it.’

The pair met in 2009, when Joseph arrived as a boarder at Aldenham School in Hertfordshire where Oliver was already studying.

Aged 13, Joseph pushed Oliver into a swimming pool at their first meeting as a prank, after which they became best mates.

Discovering they both had an entrepreneurial spirit, they sold sweets and fizzy drinks, stashed in their school blazers, to fellow pupils – making as much as £2,000 a term.

After going in slightly different directions after school, they remained friends through university – Oliver at Nottingham Trent, studying architecture, and Joseph studying animal genetics at Manchester Metropolitan University – and were inspired to create an app together after watching a mutual friend having to drop out of his studies because he couldn’t afford to continue, despite holding down four different bar jobs.

Oliver said: ‘For us that was a big moment. It encouraged us to start something.

‘One single mum even said the jobs she got through UniTaskr helped her to feed her baby throughout the pandemic.

‘We’ve had students posting tasks when they are feeling down or isolated and using it as a tool to meet friends.

‘We’re already starting to make a difference in the UK, but at the same time we’re only just scratching the surface.’

Their free app connects UK students with employers from the NHS to Spotify, who pay for skills like digital marketing, design, proofreading and photography.

Employers simply post the details of the task they want completed and how much they are willing to pay for it on UniTaskr, then the student registers their interest and, hopefully, gets hired, or an employer can browse through qualified students and approach them directly.

Fees range from £5 to test and review a product to £20 for writing a blog, while more steady work commands around £250 a week or more.

They also created a feature called ‘Shout’, which they say is their most successful to date.

Shout allows students to make money as ‘nano-influencers’ – someone with anywhere between 500 and 5,000 followers on social media – posting on behalf of companies looking to increase their profile.

Oliver, who now mans the design and development side of things, added: ‘Students have a wealth of skills but often struggle to get by working late night shifts in bars and restaurants with inflexible hours, so we wanted to change that.’

Despite their success, the friends still enjoy a normal, young professional lifestyle in south west London and are determined to keep level heads as their business grows.

They have even used their app to help the disadvantaged, mobilising 10,000 students during the pandemic to deliver food to the vulnerable.

‘This is just the beginning,’ says Oliver.

‘There are still thousands of students in the UK we still want to help.

‘And if it works here then it could work all over the world.’

If you want more tips and tricks on saving money, as well as chat about cash and alerts on deals and discounts, join our Facebook Group, Money Pot.