LONDON — The British Academy of Film and Television Awards, took place Sunday night in an empty Royal Albert Hall — as the country was getting ready to come out of lockdown and was still in mourning for the death of the Duke of Edinburgh.

In light of the Duke’s passing, Prince William, BAFTA president, also pulled out of the virtual conversation he was scheduled to host with costume designer Jenny Beavan and makeup and hair designer Sharon Martin.

It wasn’t the kind of celebration of years past, yet the virtual event still ended with a hint of optimism about what’s to come — a more diverse film industry perhaps?

After heavy criticism last year, the academy highlighted that there were 24 first-time nominees this year, and four women nominated in the director category.

“These are facts to celebrate, but hopefully soon we won’t have to, as they won’t have to be extraordinary,” said ceremony host Edith Bowman.

“Making this film was the best decision of my life. Everyone did it for a packet of crisps, because they really believed in it — it was a real labor of love,” said Fennel from a suite at the Claridge’s. 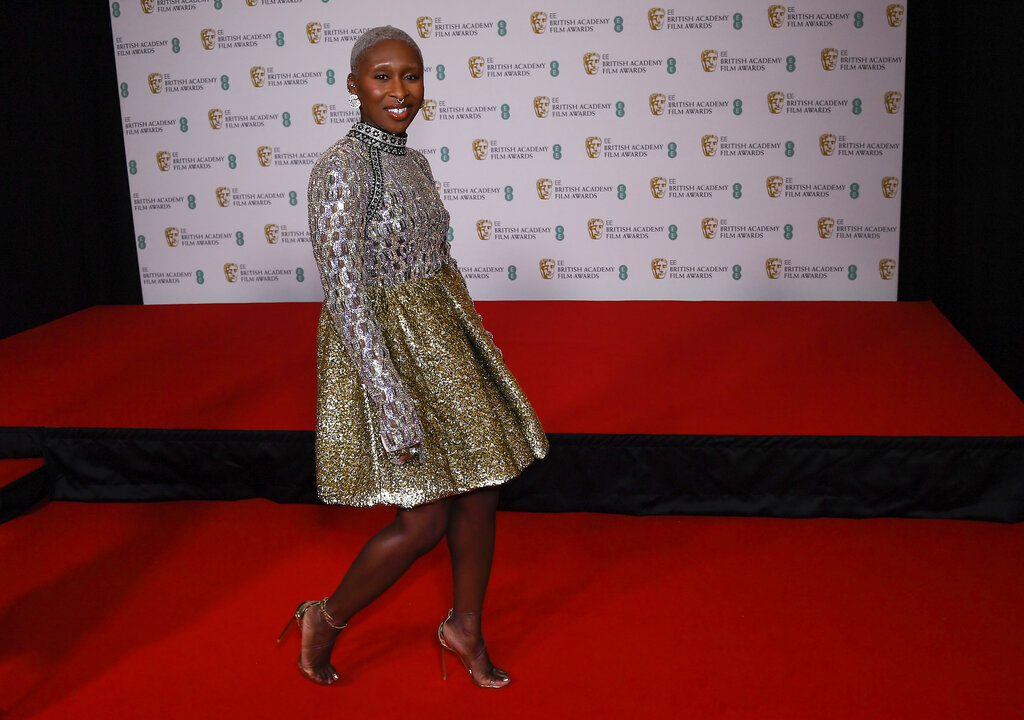 All of the Fashion at the 2021 BAFTA Awards

The virtual format didn’t prevent anyone from dressing up, but there was certainly a very timely sense of ease in most participants’ clothing choices.

In the men’s department, Riz Ahmed — who was nominated for best leading actor — swapped shirts and bow ties for a patterned wool turtleneck by Prada, while Chopra ditched traditional gowns in favor of loose draped pants and a show-stopping floral embroidered jacket with a front slit, by Spanish label Pertegaz.

According to her stylist Law Roach’s Instagram, the look was “a kiss to South Asia.” 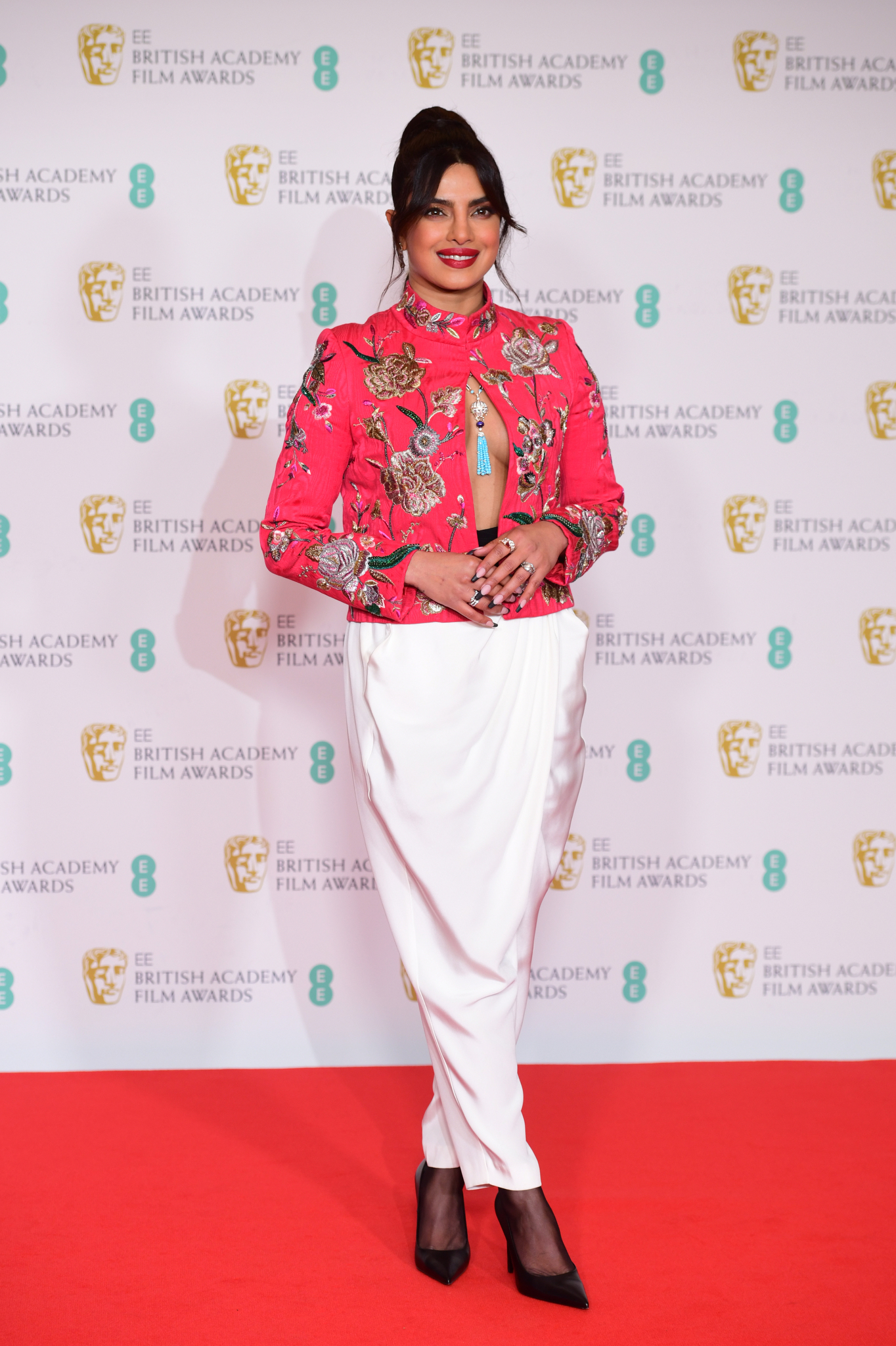 Independent London designers made their way into the event, too, from singer Celeste’s Dilara Findikoglu and Erdem gowns to director Emerald Fennell’s draped white Roland Mouret number and Piferi heels.

But trends aside, what was most noteworthy about the event’s fashion was the teams working behind-the-scenes which, like the nominations, are also beginning to become more diverse.

According to Smith, more luxury brands have become open to catering to his talent’s needs with custom looks, from Alexander McQueen creating Kosar Ali’s custom look to suit her modest dressing needs, to Prada’s chic satin custom piece for Bakray.

Another positive of the evening? The British humor — and jokes about the Brits, which all were warmly welcomed.

“It’s been such an honor to work in your country. I’m French as you can hear, but in my heart I feel like I’m English,” said Florian Zeller, upon accepting the award for best adapted screenplay.

“Someone finally likes us, thank you,” said co-host Dermot O’Leary.

Hugh Grant, who took to the stage to present the BAFTA fellowship to director Ang Lee, kept spirits up too: “If Ang were actually to wear all the garlands he was awarded in Cannes and Venice over the years he would basically be a hedge,” he said, also praising the director’s variety of work. “It’s hard to believe that he directed them all — I for one have my doubts.” 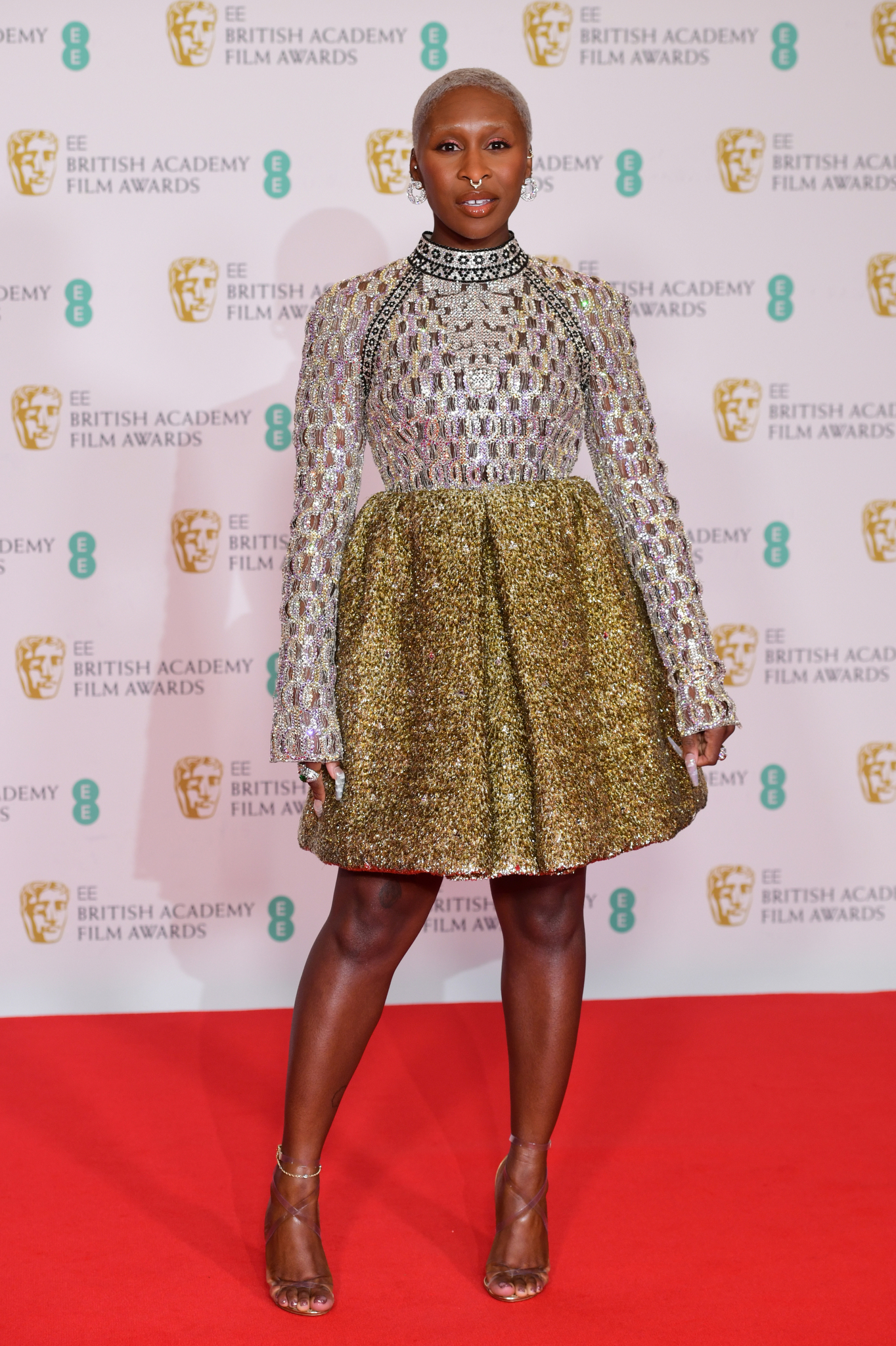 Korean actress Yuh-Jung Youn also had a message for the Brits during her acceptance speech for best supporting actress: “This award is meaningful – especially being recognized by British people who are known as snobby people, yet they approved me, so I feel very privileged,” she said.

Danish director Thomas Vinterberg accepted the award for best film, not in the English language, for his movie “Another Round,” shot in Copenhagen. “I had a small suspicion you Brits would like a movie about drinking,” he joked.

The ceremony ended with a tribute to Prince Philip, a BAFTA patron,  and the many other film professionals who lost their lives in the last year, from composer Ennio Morricone to producer Amberto Grimaldi and actors Sean Connery, George Segal, Michael Chapman, Barbara Jefford Actress and Irrfan Kahn.

“Sleep well, the love and light you left in this universe, is holding us all together,” said Bakray, as she accepted the rising star award for her performance in “Rocks.”

Prince Philip Remembered for His Service, Style — and Controversy

One Direction Zayn Malik: ‘I didn’t make any friends from the band’