It’s baby Boris! Three-month-old boy with a mop of blond hair is compared to the Prime Minister ‘every time he leaves the house’

A baby boy has won comparisons to Boris Johnson thanks to his shocking mop of white blond hair.

David Doronina, from Surrey is just three months old but already has more hair than many toddlers.

His resemblance to the Prime Minister was spotted by nurses shortly after his birth on March 1, according to his mother Tatiana Doronina, 35.

Now wherever David goes, his parents are stopped in the street by strangers who comment on his looks. 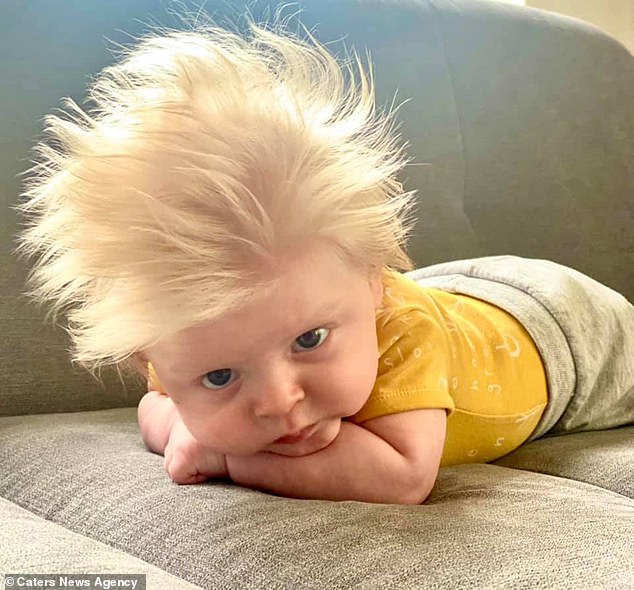 Little David Doronina, from Surrey, three months old, pictured, was born with a full head of striking blonde hair that has earned him comparison to the Prime Minister’s mane

New mum, Tatiana, said: ‘David is like celebrity. Everyone is literally getting crazy about his look. People make the comparison to Boris the minute they see him.’

David was born overdue and weighing 9lbs 10oz but Tatiana’s first thought was about his hair. 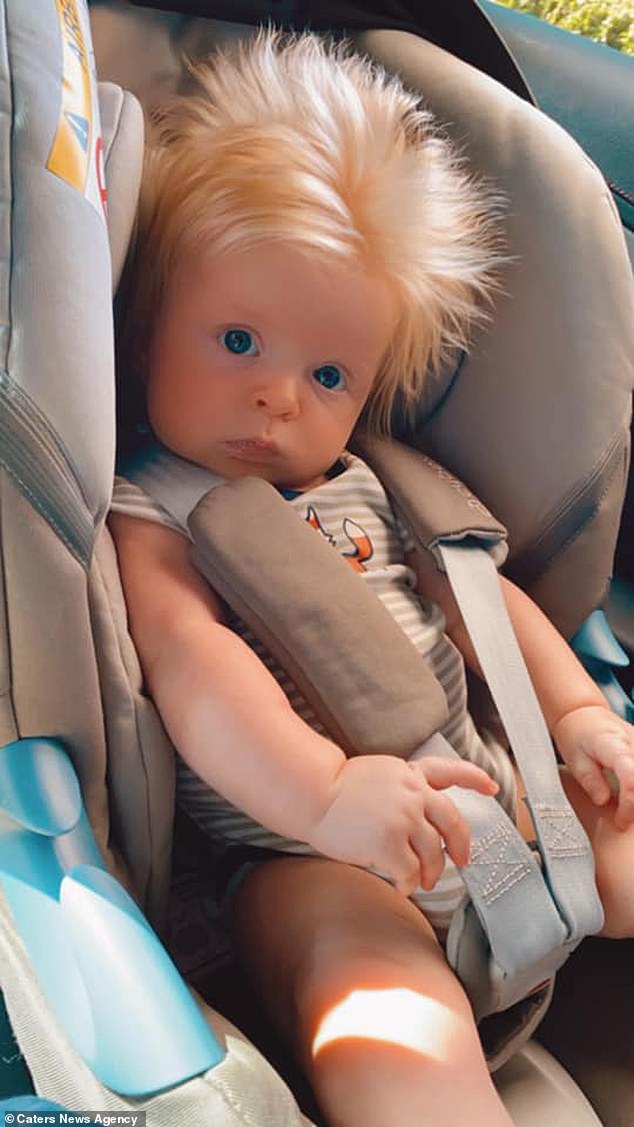 David’s father Uslan, 43, was tempted to name his son Boris when nurses immediately pointed out his mane resembled the Prime Minister’s when he was born on March 1 (pictured now) – but Tatiana refused

‘It was only after he was washed I realised just how much hair he had. I was so shocked, but every nurse who met him said the same, they couldn’t believe he was so hairy. He is a mini Boris, he looks just like him.’

After the comments in the hospital, dad Ruslan, 43, suggested they called their first son after the Prime Minister, but Tatiana refused.

She said: ‘We didn’t need to call him Boris for people to say he looks just like him, the resemblance is so obvious, it’s scary.’

The couple named their son after St David.

Tatiana said: ‘When he arrived overdue, on March 1, we read about the meaning of the day and really liked the name and also how it sounds in Russian too.’ 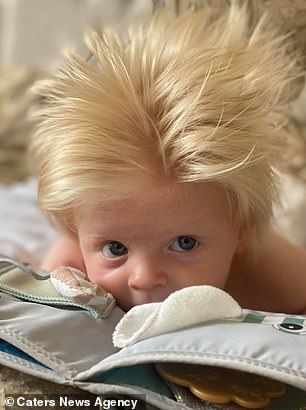 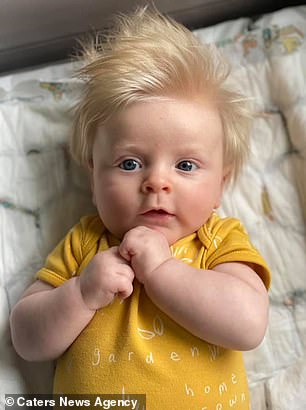 Proud mother Tatiana, 35, said strangers stopped the couple wherever they went with their son, pictured

David’s parents both have dark hair and they were very shocked when their son was born with very blond hair.

Tatiana, a former model and tv presenter added: ‘I think some people must think he is not my baby, I’m not looking after him, he is mine.

‘Every time leave the house I have strangers come over to me to comment on his hair. 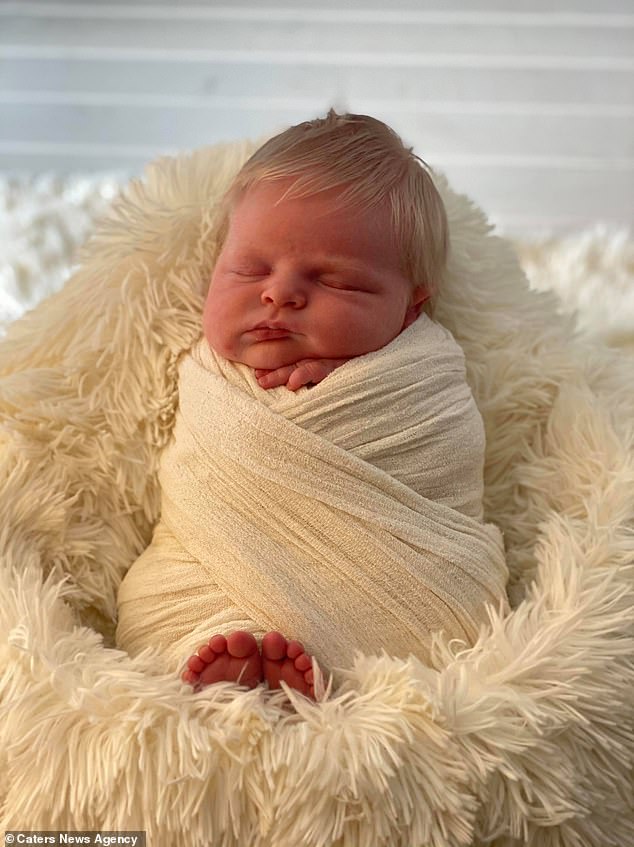 David soon after his birth. Even as a newborn, David’s mop was a hot topic, and Tatiana had to joked he was ‘not’ Boris Johnson’s son Wilfred

‘David is so charming, he is such a happy baby and has such a calm personality so people love to look at him.’

Husband Ruslan, who works in construction added: ‘We could not believe it.

‘We both have asked family to find out where the blond gene may have come from. We are both dark haired with an olive complexion but David has such fair skin and blue eyes.

‘Nobody on either side of our family has blond hair but my mother was born with blonde hair so maybe he gets it from my side of the family.

Tatiana added: ‘I did have a dream that my baby would be blond but I thought that was crazy because we are so dark haired. 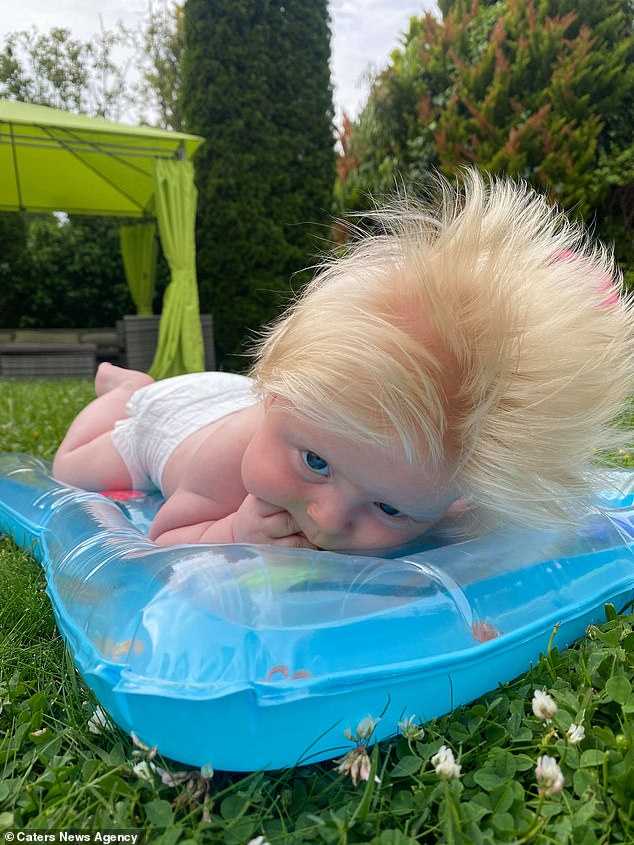 David, pictured, is growing into a real show-stealer thanks to his generous mane of hair, and even has his own Instagram

‘My husband joked it was a good job he was conceived in lockdown, because he doesn’t look like us.

‘His hair is such a beautiful colour though and he has such long eyelashes. I wish I had his hair, it is an amazing colour and so thick. I was 100 per cent sure he would be dark haired, I just can’t believe my son is blond.

‘I know his thick, long hair comes from me because my hair was long and thick as a baby too.’

Despite its length, Tatiana has no plans to cut it yet.

She said: ‘I am curious to see just how big it grows but it is already hard to manage. 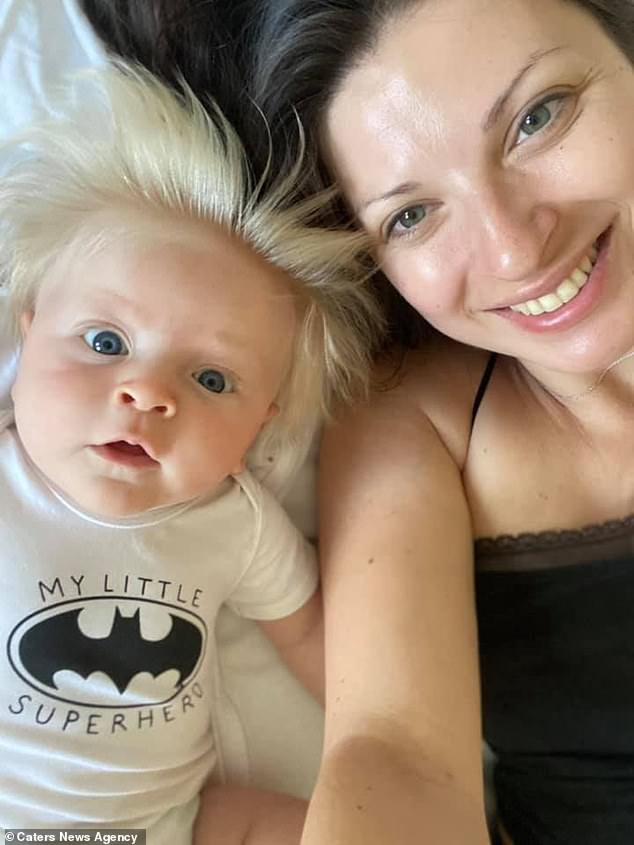 Dark-haired Tatiana was shocked when her baby, pictured, was born with a strikingly blonde and generous mop

‘When I wash his hair I try to style it but once it is dry it just sticks up everywhere.

‘For now I have kept his hair completely natural but I think it will need styling and I will blow dry it. I think he will need an extensive hair care regime. It is difficult to manage and I think it has a mind of his own – just like Boris’ hair. Maybe David will be a future PM, you never know.’

Tatiana has set up on Instagram for baby David but jokingly wrote ‘not Boris Johnson’s son’ on his profile.

She said: ‘I don’t mind the Boris comparison, I know people would think it even if we didn’t realise ourselves. I just hope Boris doesn’t mind.

‘I hope his hair makes him stand out, I would like him to join a baby modelling agency and see where this adventure takes us.’ 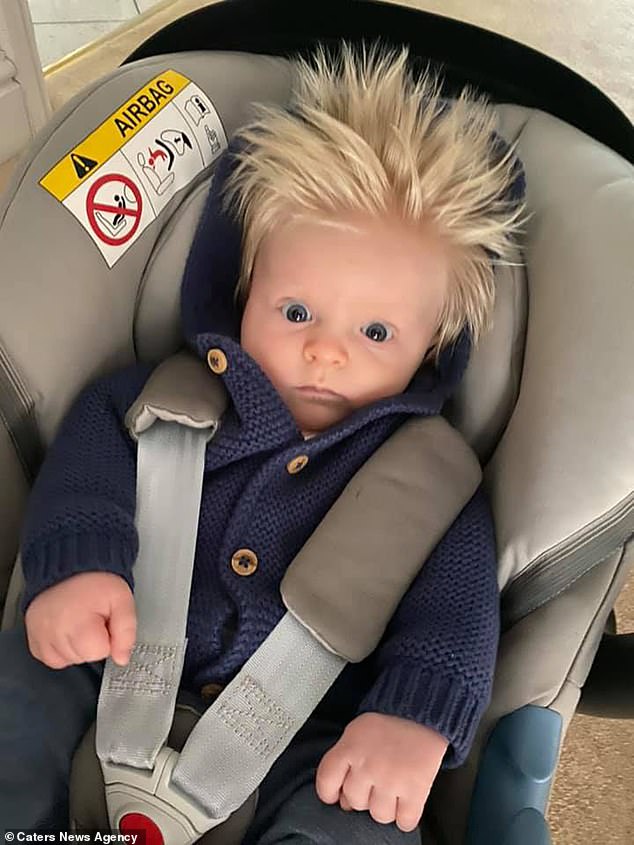 Tatiana joked David, pictured, will need an ‘extensive hair care regime,’ and that her baby’s mop already has a mind of its own