Army of GPs to target patients in campaign for Medicare reform

Frustrated GPs are preparing to ramp up their federal election campaign for higher Medicare rebates by encouraging patients to use their votes to demand funding for longer consultations, including after hours.

The Australian Medical Association will on Wednesday give the nation’s 45,840 general practitioners election posters to hang in their practices and template letters for patients to send to their local MPs over the next 5½ weeks. 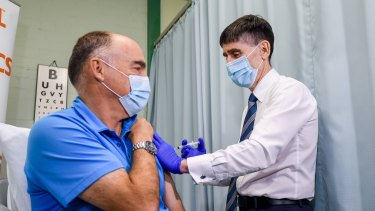 AMA past president and Melbourne GP Tony Barone will be talking to patients about Medicare funding ahead of the election.Credit:Joe Armao

Melbourne GP Dr Tony Bartone, the association’s past president, said general practice had been forgotten and Medicare rebates were failing to keep up with rising costs.

He said GPs would use their access to hundreds of thousands of voters to campaign for change in the lead-up to the May 21 election and “highlight to patients in waiting rooms what’s going on”.

More than one in 10 Australians aged 15 and over (11 per cent) visit a GP at least 12 times a year, according to the Australian Bureau of Statistics’ latest patient experience survey for 2020-21. Thirty-five per cent saw a GP between four and 11 times a year, 37.5 per cent two to three times and 16.3 per cent once.

The AMA’s Modernise Medicare campaign is calling for increased funding to enable GPs to spend longer with patients, including after hours, and provide team-based care with nurses, pharmacists, dieticians, physiotherapists, podiatrists and other allied health workers on site.

“GPs have not received the support they deserve or need from successive governments,” he said.

Royal Australian College of General Practitioners vice-president Dr Bruce Willett said while GPs had traditionally been reticent to talk to their patients about anything political, they were “keen to talk about the importance of health care and having that properly funded”.

And while doctors would never tell their patients how to vote, he said, “they will point out the importance of patients receiving a proper rebate that can allow them to get proper services, to fund the sort of health care that they would like”.

‘GPs have not received the support they deserve or need from successive governments.’

Neither major party has announced plans to increase GP Medicare rebates and the government’s 10-year primary care plan – which promised to allow patients to enrol with a single GP practice and access extra services through a program called MyGP – was not funded in last month’s budget.

While campaigning with Labor leader Anthony Albanese in Tasmania on Tuesday, the party’s finance spokesperson, Katy Gallagher, who previously served as ACT health minister, said “the proper funding of primary care is critical if we’re going to make sure our health system works”.

Albanese unveiled a $31.3 million plan to restore a 50 per cent regional loading to telehealth psychiatric consultations, a policy that aimed to increase access to bulk-billed services in the bush.

Prime Minister Scott Morrison said on Monday the government’s economic management supported the health system and that Medicare bulk-billing rates were “now up to 89 per cent”.

However, the Health Department’s latest report on Medicare services shows the proportion of GP consultations that are bulk billed fell to 88.4 per cent in the December quarter.

Willett said GPs were disappointed by last month’s federal budget and would push hard for election commitments to invest in Medicare, saying rebates should “reflect the service that GPs provide” or more patients would face out-of-pocket costs.

“We recognise that a lot of people with chronic illnesses and people on pensions really do struggle to pay,” he said. “GPs continue to bulk bill, but there’s a limit to that. It’s also about the amount of time that GPs get to have with their patients, and we are frustrated by not being able to spend enough time … to provide the quality care that we’d like to be able to provide.”

Patients with complex mental health conditions and chronic illnesses could not be adequately cared for in a 15-minute consultation, he said.

Jacqueline Maley cuts through the noise of the federal election campaign with news, views and expert analysis. Sign up to our Australia Votes 2022 newsletter here.