Home » Lifestyle » Are YOU benefiting from 'pretty privilege'? Are YOU benefiting from 'pretty privilege'?

Do YOU benefit from ‘pretty privilege’? Attractive women reveal they get concert tickets, free drinks and better healthcare because of their good looks – but insist it can also be a curse because they’re not ‘taken seriously’

Attractive women have revealed how they have been given cash, free concert tickets and even better healthcare thanks to ‘pretty privilege’.

Women from around the world have taken to TikTok in recent months to swap stories of the perks they’ve enjoyed simply because they are conventionally good looking, from free drinks to kinder treatment from strangers.

‘Pretty privilege is about how people who are thought to be more attractive, according to society’s norms, tend to receive more affirmation, validation,’ pyschotherapist Lucy Beresford explained to FEMAIL. ‘Or they might receive actual tangible benefits such as fame, fortune or romance.’

TikTok user Anjola Fagbemi, who lives in Chicago, shared a TikTok recounting everything she had a received in a single summer as a result of her ‘pretty privilege’. She claims she received concert tickets, free taxi rides, meals out and rounds of cocktails, solely because of her looks.

However other TikTok users who admitted to benefitting from ‘pretty privilege’ argued there are downsides, with some posters claiming they are more likely to be victims of sexual assault or harassment, struggle to make friends and are not taken ‘seriously’ by men. 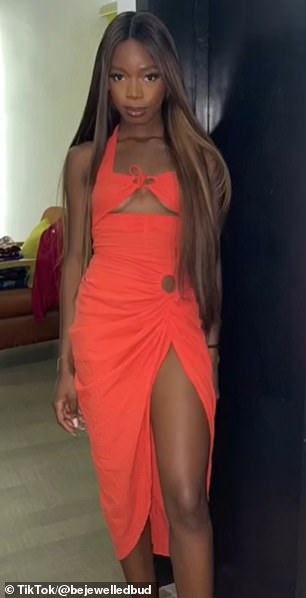 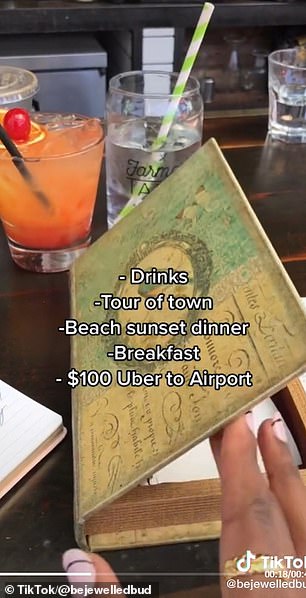 Attractive women have revealed how they have been given cash, free concert tickets and even better healthcare thanks to ‘pretty privilege’. TikTok user Anjola Fagbemi, left, who lives in Chicago, shared a TikTok recounting everything she had a received in a single summer including drinks, a beach sunset tour and a $100 Uber on a visit to San Diego (right)

‘Studies have shown that people respond positively to standards of beauty such as symmetry or youth,’ Lucy explained. Others show there is a bias towards white and Eurocentric beauty standards, an issue addressed by several TikTok users.

Lucy continued: ‘The human susceptibility towards people perceived as beautiful or attractive, pretty privilege can influence hiring decisions in the workplace, the success of dates, parental favouratism towards children, and who gets evicted on reality TV shows.’

‘We don’t always realise we are making a preference based purely on looks, but it’s important to remember that some of this is because our gut feel speaks of a time before language, when the visual was the only information we had to go on, about another person.’

A 2015 report, for example, found that physically attractive workers earn up to 15 per cent more than those considered less attractive or unattractive. A separate 2017 study found attractive female college students achieved better grades than unattractive ones.

There is also the so-called ‘halo effect’, first documented in 1920, whereby an individual’s perception of someone is positively influenced by his or her opinions of that person’s other related traits.

In the case of ‘pretty privilege’, more physically attractive people are more likely to be seen as possessing positive personal qualities. 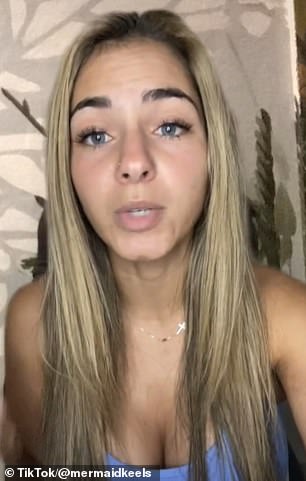 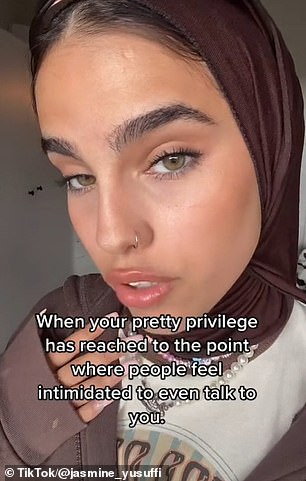 TikTok user known as Mermaid Keels , 25, from Kentucky, left, told how she had experienced ‘pretty privilege’ after losing weight and says strangers are now more likely to be kind to her. Right, one TikTok user claims she is so attractive that people are intimidated by her

Beauty and fashion influencer Ashanti Zaire, from New York, said she was pulled out of the crowd at a Lil Baby concert and brought onto stage because of how she looks.

Others told how they had experienced pretty privilege after losing weight.

‘I went from being unnoticed to very noticed,’ said American user @bonniedoes. ‘I had doctors take me seriously for the first time in a long time.’

TikTok user known as Mermaid Keels, 25, from Kentucky, had a similar experience after losing weight. 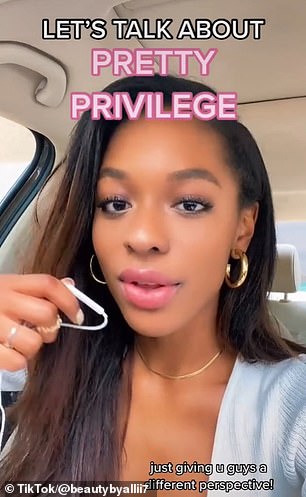 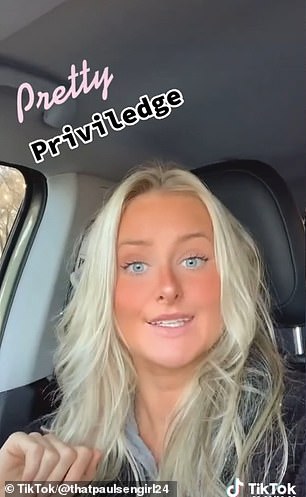 A model named Alli , who lives in Miami, Florida, left, said women who benefit from pretty privilege also experience negative side-effects, like not being taken seriously by men. Right, another TikTok user told how ‘pretty’ women are more likely to be deemed intimidating

She said: ‘It can be little subtle things you wouldn’t notice. Not being charged for that extra drink or dessert at a restaurant, or having someone offering to put the air in your tyres instead of seeing you struggle doing it.

Another user who said she recently became ‘pretty’ said: ‘It’s insane how kind people are when they find you attractive. People who literally wouldn’t even look at me before are now so kind to me. It’s not even their fault, it’s probably a completely subconscious thing.’

However others claimed they are judged, excluded and not taken seriously because of how they look, with this theory backed by psychologist Aaron Surtees, founder of the Subconsciously app.

He said: ‘The downside of pretty privilege can be false impressions of a person and assuming they are vein or they are a threat to us.’

‘For one, girls that benefit from pretty privilege, sometimes guys don’t take you seriously. If you are one of those girls and it does happen to you, you just have to deal with it.

‘You might think “this guy is really into me” but he might have a girlfriend and just want to hook up, you don’t no.

‘Girls see you as competition. Feeling lonely and being excluded from things. Pretty privilege is a privilege but just keep in mind that not all pretty girls have it all together or have a perfect life because they’re pretty.’