ANDREW NEIL: Biden’s now ready to arm Ukraine to the hilt… Germany and France must pull their weight too

President Joe Biden spent just short of an hour on the phone from the Oval Office with Ukraine’s president Volodymyr Zelensky on Wednesday to tell him about America’s new $800 million package of military aid for his beleaguered but defiant country.

It included some of the more sophisticated, heavy-duty weaponry Ukraine has been demanding from the West but until now has been largely denied, such as 18 howitzer cannons — armoured, mobile and with a 20-mile range.

So the U.S. president knew Zelensky would be pleased.

But the Ukrainian leader’s reaction was to complain it didn’t include the helicopters on his officials’ wish-list in previous talks with Biden’s hawkish National Security Advisor, Jake Sullivan, and his top military man, General Mark Milley, chairman of the Joint Chiefs of Staff.

The U.S. President immediately added 11 Mi-17s, Soviet-era helicopters still widely used as troop carriers and gunships by militaries across the globe, which Ukrainian pilots know how to fly. 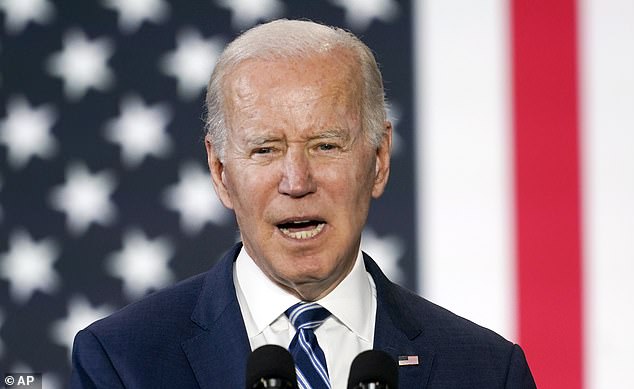 It all amounts to a significant step-change in U.S. military aid to Ukraine.

On a trip to America this week I spoke to several sources privy to Biden’s latest thinking. They all agreed that, in the wake of Russian atrocities in Bucha and many other places in Ukraine, Biden had decided that he could never make peace with president Putin — that he really did see him as a war criminal engaged in genocide — and that Russia had to be treated as an international pariah until he was gone from power.

Thus has the man who once mused that a ‘minor incursion’ by Russia into Ukraine might be acceptable, who has dithered at times over how to respond to Putin’s unprovoked invasion and made several embarrassing gaffes along the way, become the U.S. President prepared to arm Ukraine to the hilt.

‘The Ukraine crisis has been tough for a man of Joe Biden’s years,’ a source tells me.

‘He’s struggled to cope at times, he’s often expressed himself badly. But he is fundamentally a decent man who knows evil when he sees it.

‘He regards Putin as beyond the pale. He will not deal with Russia as long as Putin is in the Kremlin.’

Even before this latest package, the scale of U.S. military aid to Ukraine has been substantial — and decisive in helping the country slow down, stop and sometimes even repel the invaders.

The $800 million (£612 million) comes on top of $2.4 billion (£1.8 billion) already sanctioned and largely delivered. Every day, U.S. cargo carriers land close to the Ukraine border packed with weapons and other military hardware, which then travels by ground convoy into Ukraine. 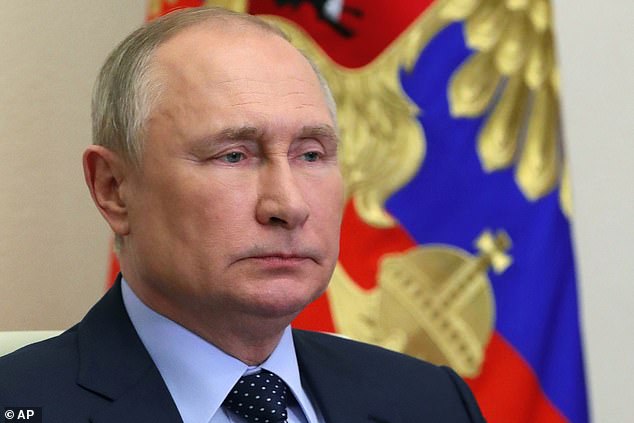 They all agreed that, in the wake of Russian atrocities in Bucha and many other places in Ukraine, Biden had decided that he could never make peace with president Putin — that he really did see him as a war criminal engaged in genocide — and that Russia had to be treated as an international pariah until he was gone from power

The new weaponry is not coming a moment too soon. Putin has given up on taking the capital, Kyiv. Indeed, it looks like he accepts that a wholesale occupation is now impossible.

But he is reconstituting and redeploying his forces to the Russian-speaking Donbas region in eastern Ukraine, part of which Russia has effectively occupied for eight years.

He is attempting to establish a land corridor along Ukraine’s south-east coast from Crimea, which he seized in 2014, and Donbas. It is from the east that he now aims to mount a war of attrition against the rest of Ukraine.

U.S. intelligence sources accept Putin is digging in for the long haul. He calculates that even if the Ukrainian military can hold him to a stalemate, in a prolonged standoff, the West will lose interest.

Ukraine will slide down the agenda, divisions among the allies will emerge and can be exploited.

And there is cause for concern. Biden’s leadership over Ukraine is winning him no domestic dividend. His latest approval rating has slumped to 33 per cent.

His Democratic Party faces big losses in the House of Representatives in the mid-term elections this November and I think it could even lose the Senate.

If the Democrats lose Congress, recriminations will be bitter.

Nor does Biden have an obvious successor, should he decide not to run again. Vice President Kamala Harris, picked to be a shoo-in, is even more unpopular than Biden, her grip on global affairs not even tenuous.

In the wake of Boris Johnson’s surprise visit to Kyiv, greeted with global acclaim, the Biden administration wants its own day in the Ukrainian spring sun. Biden, so far, is ruled out for being too frail. Nobody, so far, is suggesting that Harris should take his place.

As for Republicans, Russia’s barbarity in Ukraine has silenced most of the eccentric Putin-lovers on its ‘nut job’ fringe. But its most famous Putin fanboy of all, Donald Trump, still looms over the party, stymieing all attempts to move on from the Trump years.

It is still widely accepted that the Republican nomination for the 2024 presidential election is his for the asking. It is a sign of the sparse Democratic gene pool that increasingly it’s being said that only Biden could stop him returning to the White House.

In almost half a century of covering American politics, I can’t remember both Democrats and Republicans being in worse shape. But America’s allies have their problems, too.

Britain is solid for the Biden approach, but the Johnson government is once again mired in ‘Partygate’ scandals which continue to obsess the political and media chattering classes and which Putin will conclude is just another example of Western decadence and democratic politics’ lack of serious purpose.

Germany is still a depressing drag on a proper embargo of Russian oil and gas and its leader, Olaf Scholz, has even resisted sending Ukraine the heavy armour it promised.

France is consumed with a presidential election in which the incumbent, Emmanuel Macron, recently described Nato as ‘brain-dead’ and tried to cosy up to Putin even after the invasion, while the challenger, Marine Le Pen, wants to take France out of Nato, regards Russia as an ally and still refuses to condemn its atrocities in Ukraine.

Putin hopes that a confluence of events weakens Western resolve over time. You couldn’t rule it out. The allies have more than their fair share of flaky, fair-weather politicians. But I think there are good grounds for hope that Putin’s new strategy in the east will fail just as badly as it did around Kyiv.

For a start, redeploying his forces eastwards is not without its problems. Some Russian troops have lost their stomach for the fight. There is a shortage of fresh manpower. Increasing reliance on soldiers from Chechnya and Russia’s far east is turning Putin’s forces into something of a colonial army.

Replacing equipment is an even bigger struggle than finding more troops. Ukraine has destroyed more Russian armour than some European countries possess.

Western intelligence reckons Putin will be able to field no more than 65,000 operational and well-equipped men, which is nothing near enough to break out from the east and take more of Ukraine. Indeed, it might not even be enough to hold on to what they’ve got.

In addition to howitzers and helicopters, the new weaponry flooding into Ukraine includes, from America, 300 deadly Switchblade drones (on top of the 100 already sent) and radar systems that track incoming missiles and pinpoint their origin; S-300 anti-aircraft missiles from Slovakia; T-72 tanks from the Czech Republic; and 120 armoured vehicles from the UK.

Crucially, the Russians don’t have control of the skies and the loss of the Russian navy’s Black Sea flagship, Moskva, makes that even less likely in the crucial south-eastern theatre.

The symbolic sinking of a battleship called ‘Moscow’ by Ukrainian cruise missiles is obviously massive — not just the biggest Russian naval loss since World War II but the biggest warship of any navy to go down since 1945 (yes, bigger than the Belgrano).

But the military significance is even greater. Moskva carried 64 S-300 missiles, every one a threat to Ukrainian aircraft in the south-east.

Not only has that threat now gone, the Ukrainian air force is now free to swarm all over the south coast battlefields. Even the western flank of Crimea is wide open to attack.

It doesn’t mean Ukraine can take back all the land it’s lost in the east, but it’s possible it could retake some — and Russian prospects of using the east as a redoubt from which to make further gains look fanciful.

But the West will need to hold its nerve, to tighten sanctions further and to keep the weapons coming for as long as it takes if Putin is to be thwarted in the east as he was in the west. Given the courage and fighting spirit of the Ukrainians, it is surely not too much to ask of us.