Home » All That Glitters viewers baffled by complex terminology All That Glitters viewers baffled by complex terminology

‘Who knew that a necklace and a chain are different? All That Glitters viewers are left baffled as contestants are penalised for making the wrong pieces on jewellery version of Bake Off

Viewers of BBC’s latest talent show All That Glitters were left scratching their heads after contestants were penalised for a small design flaw that saw them create necklaces and not chains.

The show – similar to the format of Bake Off, but with jewellery instead of cakes – sees eight talented crafters battle it out in two tasks over the course of six weeks.

For this week’s first challenge, the jewellers were asked to make a ‘bestselling’ 18-inch chain collar, with interlocking links, using silver wire and grain – but viewers were confused as to what exactly this meant.

Many took to social media to bemoan the judges criticisms of some pieces, after they insisted that they didn’t fit the brief because they were necklaces and not chains. 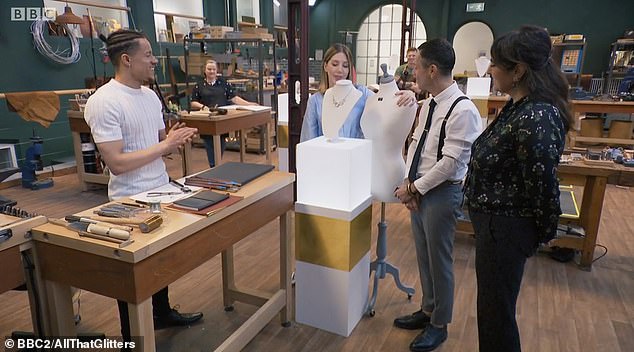 Viewers of BBC’s latest talent show All That Glitters were left scratching their heads after contestants were penalised for a small design flaw that saw them create necklaces and not chains. Pictured, judges with contestant Hugo

Jewellery maker to the stars Shaun Leane, who designed Princess Beatrice’s engagement ring and wedding band appears as a judge alongside Solange Azagury-Partridge, whose esteemed pieces are displayed in museums around the world.

‘I think a chain is one of the hardest things to design for a jeweller’, said Solange. ‘You can’t just link something with a piece of wire or a jump ring.

‘That’s not a chain, that’s a necklace. If they’ve not followed our brief and just made a necklace they could be in trouble.’

The results of the challenge saw contestants Lee and Hugo placed in the bottom  because they had misunderstood the brief and their pieces didn’t have interlocking chains. 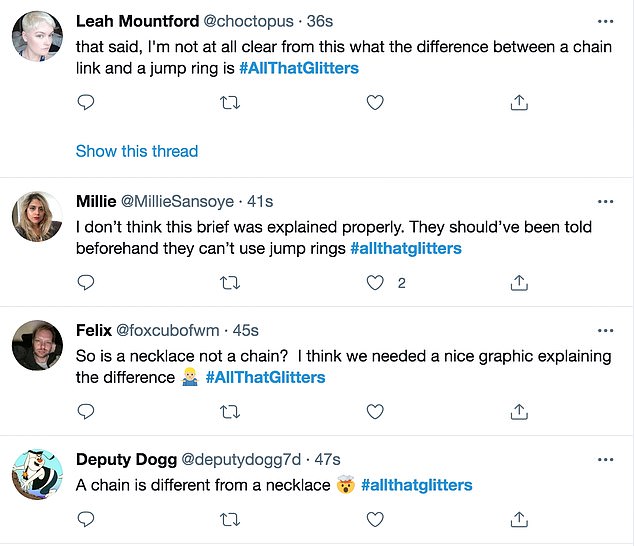 Viewers were baffled by the criticisms in the first challenge, with several admitting they were still unsure of the difference between a chain collar and a necklace

Viewers were baffled by the criticisms, with several admitting they were still unsure of the difference between a chain collar and a necklace.

‘Apparently there’s a difference between a chain and necklace. Who knew??’ wrote one.

Another said: ‘So is a necklace not a chain? I think we needed a nice graphic explaining the difference.’

A third agreed: ‘I’m not at all clear from this what the difference between a chain link and a jump ring is.’

Next was the the bespoke challenge, which saw contestants produce handcrafted pieces for a real client. 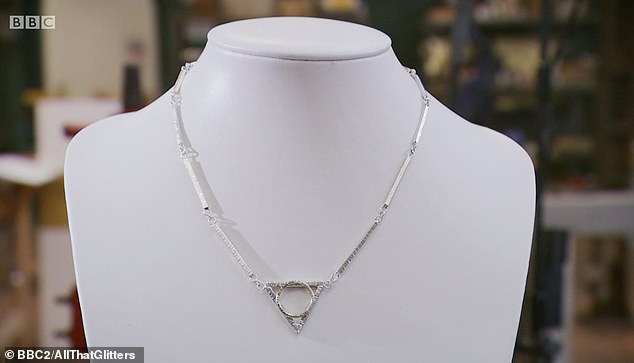 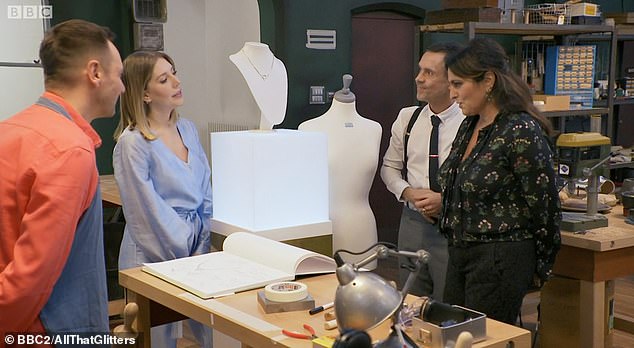 Podcaster presenter Chris Keen, from Worcester, wanted a brooch for his soldier wife Kelly to take on her next tour of duty – and happened to be a dead-ringer for the Duke of Sussex.

‘Kelly is in the royal electrical mechanical engineers’, explained Chris, ‘We met in the Falkland Islands. I was over there working on forces radio and Kelly was over there with the Army. We’ve recently had a little baby called Holly.’

The comedian delighted viewers with her response to Chris revealing he would be a stay-at-home dad while his wife was away on tour.

‘Yes thank you,’ she exclaimed. ‘There are stay-at-home dads and husbands, thank you for pushing for equality.’ 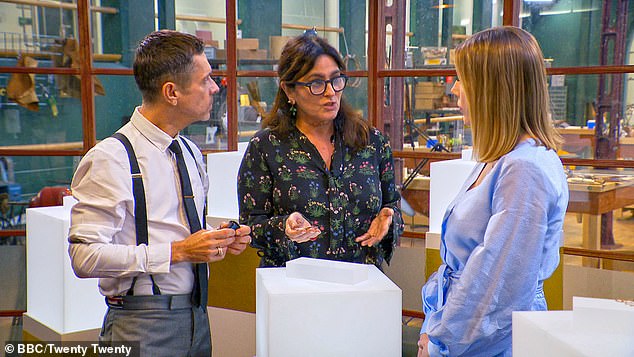 Jewellery maker to the stars Shaun Leane (left), who designed Princess Beatrice’s engagement ring and wedding band appears as a judge alongside Solange Azagury-Partridge (right), whose esteemed pieces are displayed in museums around the world

Chris revealed he wanted the contestants to design a sweetheart brooch, a piece of jewellery popular in First World War which would be given as a gift from servicemen leaving home for the front line to their partners.

They would often depict the service crest or regimental badge of the soldier in question, but Chris opted for a more personal variation for his beloved partner.

‘Id love them to think about our travelling’, said Chris, ‘We travel all around together, the Falkland Islands is so massive in our hearts, and full of penguins, they’re all over our house all over the walls’.

The contestants were given five hours to complete the challenge with Chris giving a detailed brief about precious moments in his and Kelly’s life.

The brooch chosen by Chris was stunning piece depicting a treble clef and penguin designed and created by Hugo, who was awarded jeweller of the week despite his earlier criticism.