Philip Lowe has removed any last vestige of political cover the Morrison government may have had for not permanently increasing the JobSeeker base payment.

Dr Lowe, who as the Reserve Bank governor spends much of his time trying to avoid being boxed into a position, made it clear where he stands on the support payment about 1 million Australians currently rely upon. 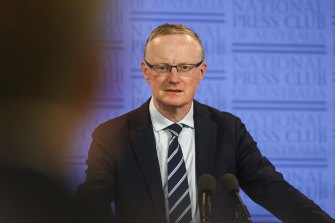 RBA governor Philip Lowe made it clear where he stands on the JobSeeker support payment.Credit:Dominic Lorrimer

The payment will revert to $565.70 a fortnight or $40 a day on March 31 when the government ends the COVID welfare supplement as well as the JobKeeper wage subsidy program.

Those 1 million unemployed Australians are set to lose $150 a fortnight once the supplement disappears.

While many in the business, economic and welfare sector have long argued for JobSeeker to be permanently increased on economic grounds, the nation’s chief numbers man went to that most Australian of values – fairness.

“It’s not a macroeconomic management issue, it is a fairness issue,” he told the National Press Club.

“As a society, what level of support [do] we want to provide to people who don’t have a job – and different people legitimately have different views on the level of support stopping – my own view is that some increase is justifiable.”

In those two sentences, Dr Lowe made it virtually untenable for the Morrison government to ditch the COVID-19 supplement and take JobSeeker back to its pre-virus base level.

It’s one thing to undermine the government position on economic grounds. But for the central bank governor to go to a values argument is a whole different kettle of fish.

When asked about the issue on Monday in his own National Press Club appearance, the Prime Minister was clear he would not be drawn into any commitment.

He said he, the Treasurer, Finance Minister and Social Services Minister were waiting on “further information on the labour market” with the quartet to “work through those many issues”.

The timeline for a decision is narrowing. When the government announced last August it would extend both the COVID-19 supplement and JobKeeper (albeit at lower rates) it gave the unemployed and businesses 64 days notice.

The supplement is due to end in 56 days.

The governor openly supported the government’s decision to wind-up JobKeeper wage subsidy while also backing the huge amount of debt it has taken on to help support the economy through the pandemic recession.

So you can’t argue he has shown any partisanship in his commentary about JobSeeker.

But his comments are a huge political headache, for they ultimately mean if the government resists an increase in JobSeeker then it is being unfair to an army of Australians.