When Nora Keegan found her ears ringing after using a hand dryer and noticed other kids holding their ears at the sound of the machines, she decided to investigate.

Nora, of Calgary, Canada, was 9 years old at the time. Nearly four years later, Nora’s research on the topic has been published in a scientific journal and she is just 13 years old.

“Oh, it was crazy,” Nora told “Good Morning America” about learning via email that her research had been accepted into the Canadian journal Paediatrics & Child Health. “I remember I was at school and I was so happy.”

Nora began her science experiment in fifth grade by driving around with her parents, both doctors, looking for hand dryers in public places that children frequent, like libraries and restaurants. The family purchased a professional decibel meter for Nora’s experiment and also used a ruler and measuring tape to measure the hand dryers’ volume. 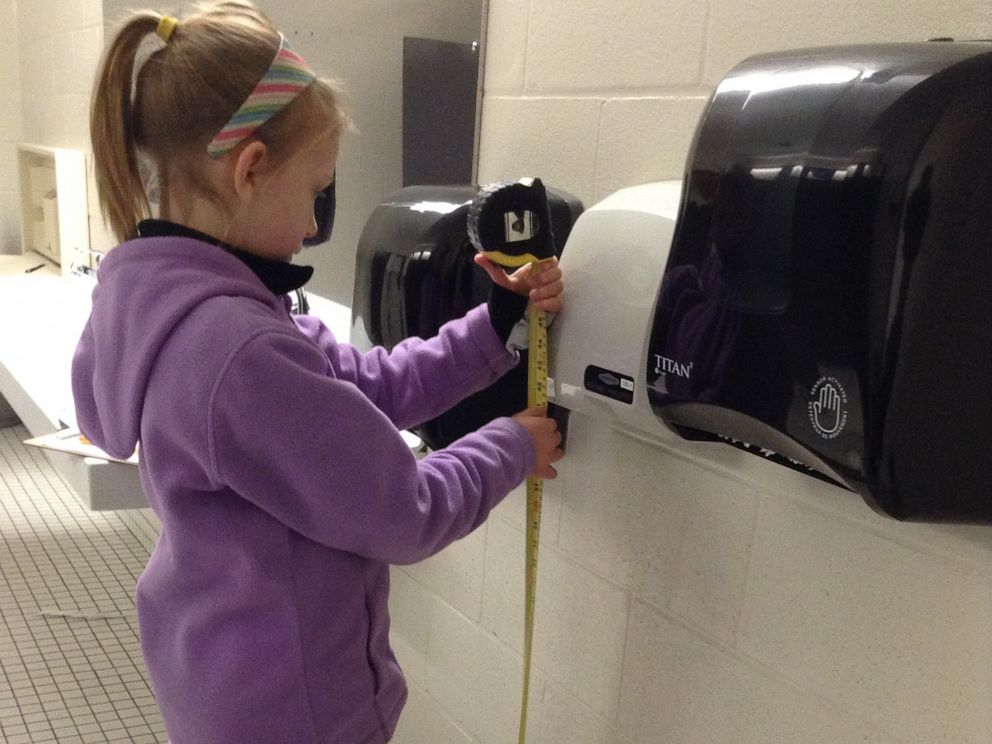 “We had a bag with all our stuff in the car at all times and if we ever saw a hand dryer we’d go in and measure it,” Nora said. “Or if we were going to my sister’s hockey game, we’d go see if there was a hand dryer in the arena to measure.”

Over the course of two years, Nora estimates she measured the volume of 44 hand dryers. 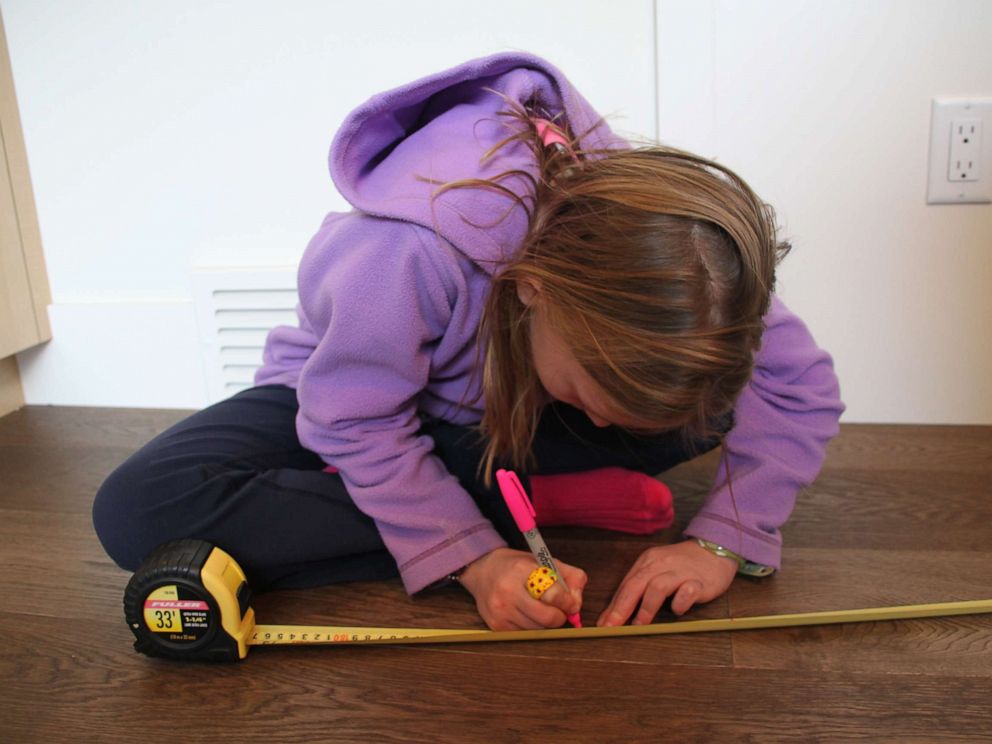 After one year of testing, Nora’s results earned her a bronze medal in 2016 at a local science fair. She decided to keep investigating, keep testing and entered her project again the next year as a sixth-grader, and won a gold medal.

“I found that hand dryers can actually be over 100 decibels, which children shouldn’t be exposed to at all,” she said. “I thought, ‘This is crazy because hand dryers are such a daily, common thing, to be hurting children’s ears.'”

“I thought that was crazy and I decided to do more research just to back it up so I could have more data prove it more,” Nora added. 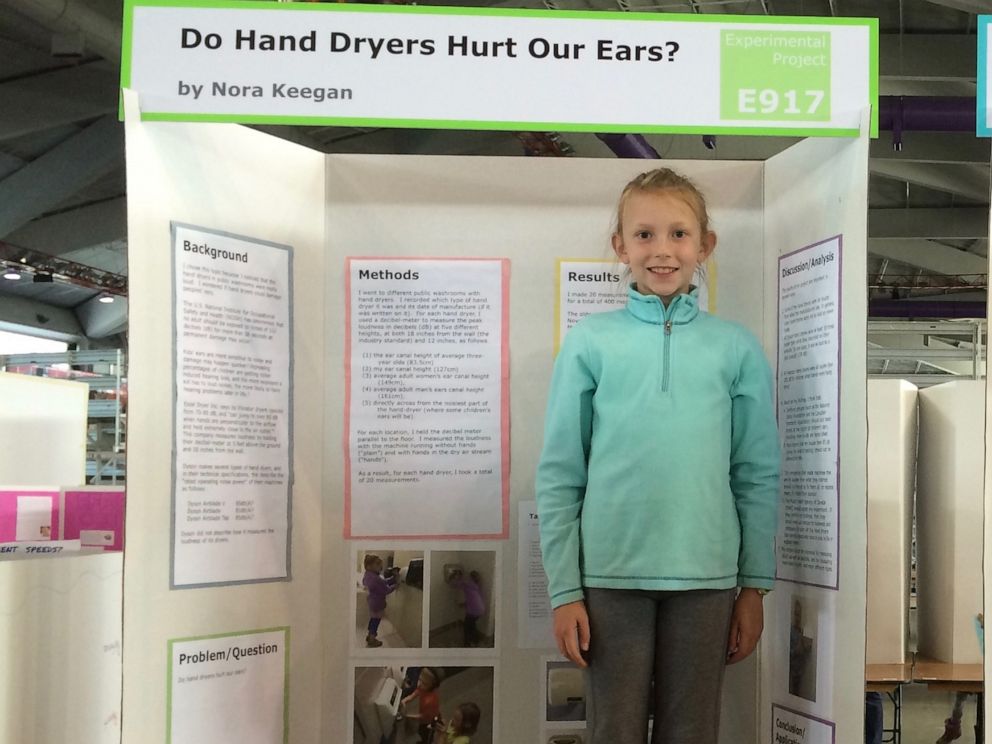 Noise above 85 decibels over a prolonged period of time may start to damage the hearing of adults, while loud noise above 120 decibels can cause immediate harm to a person’s ears, according to the U.S. Centers for Disease Control and Prevention (CDC).

As a comparison to hand dryers, music played through headphones at the highest volume is often 94 to 110 decibels, which is more than 100 times as intense as 85 decibels, according to the National Institutes of Health (NIH).

Alarmed by the results, Nora not only kept collecting more data, she started to come up with solutions for how the volume of hand dryers could be lessened.

“In grades seven and eight, I used a synthetic air furnace filter from Home Depot and formed it to go under the hand dryer with a panel in the front so that the air still comes out to dry your hands but the noise is muffled,” she said. “I stitched the models by hand to make the different shapes to fit over the hand dryer.”

Nora’s research earned her special recognition at the Calgary Youth Science Fair earlier this year. It also motivated her to reach out to journals to publish her findings.

Nora’s paper on hand dryer volume was published in Paediatrics & Child Health in June, just before she left for summer camp.

As she prepares to enter ninth grade, Nora said she is not sure she will continue her hand dryer research. Though she does plan to follow up on her findings with Canada’s top health officials and the manufacturers of the hand dryers she tested.

One of them, Dyson, confirmed to “GMA” that they are planning to have Nora meet with one of the brand’s acoustic engineers.

“Dyson’s philosophy is about using science and engineering to solve problems, and through the James Dyson Foundation we encourage more young people to study and pursue careers in these fields,” Dyson said in a statement. “So we’re delighted to see Nora’s work and we’re looking to arrange a call between Nora and one of our acoustics engineers in the near future. We are keen to show Nora how our latest hand dryers are significantly quieter than their predecessors thanks to research and development by our in-house acoustic engineers – perhaps she will want to join the team one day?” 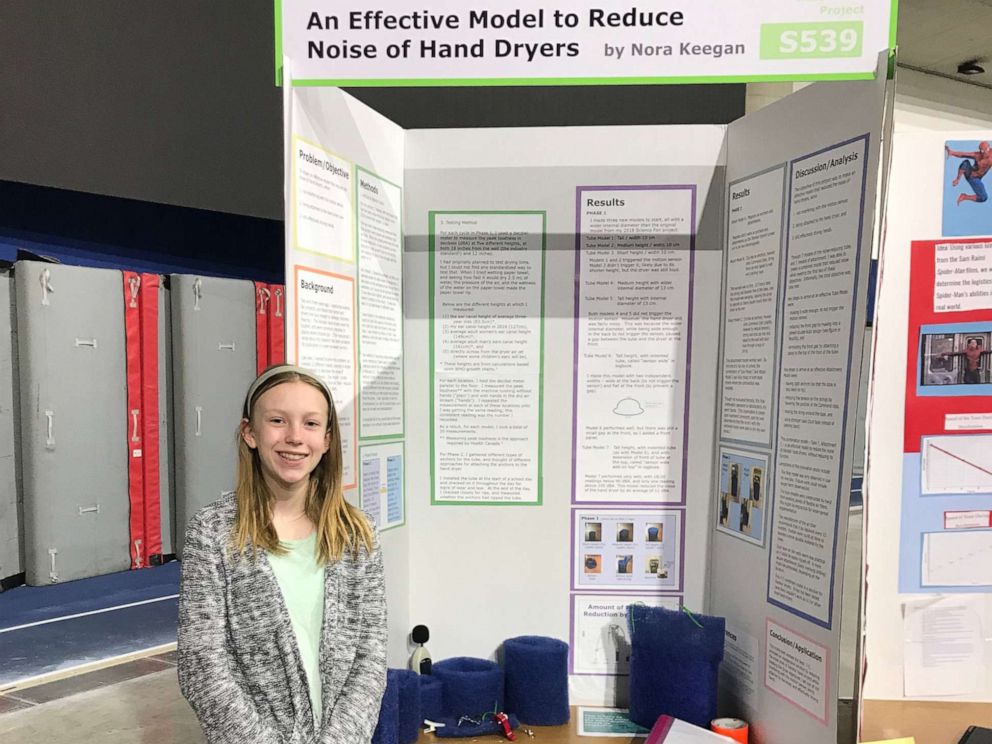 Nora said she hopes to grow up to be a marine biologist or an environmentalist. When not focused on science, she said she loves to figure skate, read, cook, hike, run and bike outdoors.

Her advice to other kids is to “never give up.”

“I feel like if you see something that you question, you should keep going for it no matter what and try not to get discouraged because something amazing may come of it,” she said. “Be curious about everything and never give up.”

'I've spent most of married life in a hotel room with the Irish team', says newlywed Cian Healy

How Job Stress Can Age Us
Recent Posts