It is one of the indelible star-is-born moments in music history: Leonard Bernstein, the 25-year-old assistant conductor of the New York Philharmonic, fills in at short notice for an ailing maestro and leads the orchestra in a concert broadcast live over the radio, causing a sensation.

“It’s a good American success story,” The New York Times wrote in an editorial, following a front-page review of the 1943 coup. “The warm, friendly triumph of it filled Carnegie Hall and spread over the airwaves.”

Fifteen years later, Bernstein was the Philharmonic’s music director. And the dream of ascending from the assistantship of a major American orchestra to its leadership — like rising up a corporate ladder — was cemented in the popular imagination.

There are still assistant conductors, bright, talented 20- and 30-somethings hired by orchestras for stints of a few years. Indeed, there are more of them than ever, and they go by a variety of titles: assistant, associate, fellow, resident. Almost every major orchestra has at least one, and they still fill the traditional duties of Bernstein’s time: sitting in the concert hall during rehearsals to check balances and mark up scores; conducting offstage groups of musicians for certain pieces; and, of course, being ready to take the podium in case of emergency. But it is rare to see them ascend to the top jobs.

And that may be a missed opportunity. When Marin Alsop steps down from the Baltimore Symphony Orchestra this summer, it will leave the top tier of American ensembles as it was before she took the post in 2007: without a single female music director. There has never been a Black music director in this group, and just a handful of leaders have been Latino or of Asian descent. 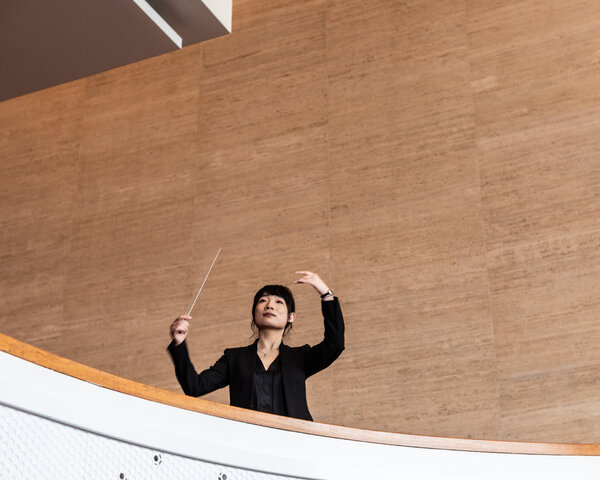 “It’s been a paternalistic industry to some degree for a long time,” Kim Noltemy, the Dallas Symphony Orchestra’s chief executive, said in an interview. “In the last 20 years it’s changed quite a bit, but there’s lag time for the top-level leadership, whether it’s management or conductors.”

But it is a very different story when you look at the country’s assistants, a far more diverse group in which women and musicians of color have found success in recent years.

Now there is a chance for those assistant conductors to become more than just another set of ears in a darkened auditorium. They provide an opportunity to fast-track greater diversity at historically slow-evolving institutions. The question now is how soon they will enter the topmost ranks — and whether, as major orchestras search for music directors in the coming years, they will look toward the crowd right under their noses.

“It’s great to have a BIPOC assistant conductor,” said Jonathan Rush, the assistant conductor in Baltimore, who is Black, referring to the acronym for Black, Indigenous and people of color. “To have that in place is awesome. But there are still not many opportunities for you to be that person that a younger musician can look up to. Yes, I get education concerts, they’re awesome, but we would have greater impact if we were music directors.”

As community engagement and outreach efforts have broadened nationwide, and become more central for leading orchestras, many assistants have added those activities to their portfolios, too. And during the coronavirus pandemic, when many artists abroad were grounded, some assistants took on new prominence. Vinay Parameswaran, the Cleveland Orchestra’s associate conductor, who had spent a few years mainly doing family concerts and leading the ensemble’s youth orchestra, unexpectedly found himself conducting multiple major programs on Cleveland’s subscription streaming platform.

The differences between the assistant ranks of the top 25 American orchestras and those orchestras’ music directors can hardly be overstated. The Dallas Symphony, for example, has had three assistants since 2013, all women; one of them, Karina Canellakis, is now the chief conductor of the Netherlands Radio Philharmonic Orchestra and principal guest conductor of the London Philharmonic. Both of the Chicago Symphony Orchestra’s conducting apprentices since 2015 have been women. In that period, the Minnesota Orchestra’s assistants have been Roderick Cox, one of the few Black conductors appearing with leading orchestras and major opera houses, and Akiko Fujimoto, who became the music director of the small Mid-Texas Symphony in 2019.

Mirga Grazinyte-Tyla, who was a conducting fellow and then an assistant conductor with the Los Angeles Philharmonic, has become a star, leading the City of Birmingham Symphony Orchestra in England and making recordings for Deutsche Grammophon. Gemma New, the St. Louis Symphony Orchestra’s resident conductor until last year, is now principal guest conductor in Dallas and led the New York Philharmonic’s Memorial Day concert at the Cathedral of St. John the Divine.

But there are still pervasive, sometimes pernicious assumptions about what a music director must look and act like — who can hobnob with donors, who can help sell tickets. And, Bernstein’s model aside, there is no clear pipeline from assistantships to directorships at top American orchestras, the way there are at many corporations.

Of the current music directors in the top tier, only a handful started as assistants at the kind of orchestra they now lead. (And, in a sign of how insular this world is, two of that handful, Michael Stern, now in Kansas City, and Ken-David Masur, in Milwaukee, are the sons of musical royalty, the violinist Isaac Stern and the conductor Kurt Masur.)

Andrés Orozco-Estrada, now the Houston Symphony’s music director, is the rare conductor to live the Bernstein dream, but he didn’t do it in the United States: He was an assistant at the Tonkünstler Orchestra in Vienna in the early 2000s, then rose a few years later to become its principal conductor. (European orchestras have trailed American ones in codifying assistant programs; the traditional conductor career path in Europe, especially German-speaking countries, goes through opera houses, not symphonies.)

The experience paradox is part of the problem. Top orchestras demand their conductors be seasoned, particularly if they’re going to appear on prestigious subscription series. But if you don’t already have that experience, it’s hard to get it.

“There are some people who are professional assistants, basically, or just they go from assistantship to assistantship,” Stephanie Childress, the St. Louis Symphony’s current assistant, said, pointing to the sense that some talented artists just cycle within those ranks without rising further.

But orchestra officials insist that things are changing, accelerated by the jolt of the pandemic and the calls over the past year for greater racial and ethnic diversity.

“The way it’s always been is all being rethought now,” Noltemy said, adding that resistance has been wearing down among players and listeners. “‘The orchestra won’t accept it; the audience won’t accept it’ — that has been completely deconstructed.”

There are ways of increasing the chances of today’s assistants becoming tomorrow’s music directors. Orchestras could deepen their investments in their assistant programs, adding positions to broaden the pool of talent getting experience and exposure. There should be a greater commitment to giving assistants slots on subscription programs as part of their contracts; this is one Covid necessity that could fruitfully outlive the pandemic.

Ensembles should make a point of looking to other organizations’ assistants when hiring for gigs. That does happen sometimes: Yue Bao, currently the conducting fellow at the Houston Symphony and a major presence in that orchestra’s streaming over the past year, will make her debut with the Chicago Symphony at the Ravinia Festival this summer.

Matías Tarnopolsky, the chief executive of the Philadelphia Orchestra, said he would like to see a kind of consortium program that could rotate assistants among several top institutions, giving them broader experience. “Could a conducting fellowship be multiensemble,” Tarnopolsky said, “either within the U.S. or around the world, bridging symphony and new-music ensemble? Then you really expand the learning.”

And if a young conductor has a success, let it snowball. In Baltimore, Rush appeared just before the pandemic as part of the orchestra’s Symphony in the City series, and was then asked to join its next assistant conductor audition, planned for June 2020.

That audition was canceled as the virus spread, but in July, Rush got another call. “Hey, listen,” he recalled the orchestra saying, “the musicians keep raving about your work in February, and we would like to invite you to be assistant conductor for the 2020-21 season.”

“It’s definitely been different,” Rush added of assisting during the pandemic, which has included regular work with the orchestra’s streaming programs. “But I wouldn’t have gotten as much podium time. I’ve gotten to conduct the orchestra every single week. ”

Ensembles should have a plan for continuing relationships with their assistants as those young conductors move on. Marie-Hélène Bernard, the chief executive of the St. Louis Symphony, said the organization had made a commitment to invite Gemma New every season as a guest conductor now that her resident contract is over.

“For her, we have a trusted relationship,” Bernard said. “She can step outside of her comfort level and take musical risks she might not take with other orchestras she hasn’t yet visited. Nurturing is not just for the time she’s here with us.”

This is the work that can help turn the encouragingly diverse landscape of assistant conductors into the future of the country’s top music directorships. “Getting a replacement for Marin isn’t even a tipping point,” Noltemy said, referring to Alsop’s departure from Baltimore. “The tipping point would be a significant number of women in positions in the top orchestras in the U.S.”

But the field will not get there without taking risks. Ruth Reinhardt had just started as an assistant in Dallas in 2016 when she was tapped to jump in for a subscription program, replacing a veteran conductor who’d suffered a stroke. Scott Cantrell, the Dallas Morning News critic, raved: “Few artistic experiences are as exciting as witnessing a brilliant debut by a young musician.”

It worked for Bernstein; we’ll see if it works for this new generation. “When I started conducting 15 years ago or so,” Reinhardt said, “people would openly tell you that you couldn’t do this as a woman. And things are changing. The jobs are more available. Hopefully as we get older, we’ll move up the ranks.”