Boxer David Haye and The Saturdays star Una Healy enjoyed a night out together amid speculation they’re in a ‘throuple.’

Rumours first started swirling over the New Year that the sports star, 42, and girl group member, 41, were in a three-way relationship with David’s model girlfriend, Sian Osborne, 30,

The trio shared a series of cosy snaps to social media as they soaked up the sun in Morocco, holding hands at the dinner table and posing in the swimming pool.

While neither woman has spoken about the rumoured relationship, David recently played coy over the supposed arrangement, refusing to divulge details.

Speaking at the event to Pro Boxing Fans, David said: ‘I like to keep my private life private.

‘I let people in through my social media a little bit, but what I do behind closed doors is between me and the girls involved.’ 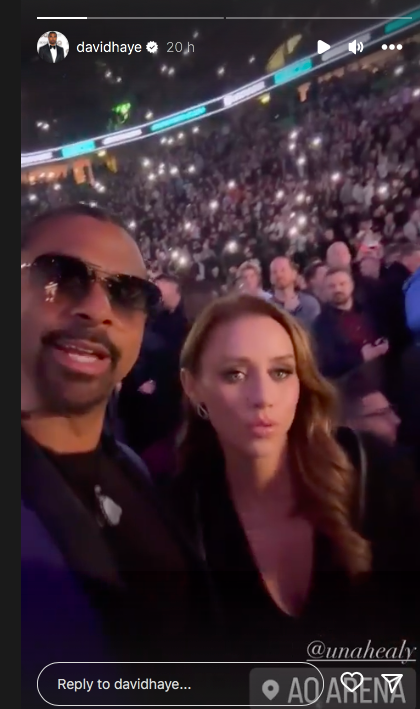 He added: ‘So yeah, I don’t really want to go into all that.’

Now, he and Una have reunited, filming a video together on Saturday night at Manchester’s AO Arena for Chris Eubank Jr’s fight against Liam Smith.

In a video shared to David’s Instagram Story, the pair looked cosy as they pouted for the camera.

Model Sian didn’t appear to be in attendance, but former heavyweight champion David started dating her in 2020, when she worked for his Black Mask Company.

He also has three children – a daughter named Sienna and two sons named Cassius and Kingston – from his previous marriage to ex-wife Natasha.

A source previously said that David and Sian created a profile on celebrity dating app Raya to ‘find the perfect partner to enter their relationship.’

‘As part of their profile they said they were “seeing what’s out there”, and said they wanted to try “new experiences”,’ they claimed.

‘They spoke to a few people before being introduced to Una and they hit it off immediately.’

Ben and Una split in 2018, and the X Factor and Dancing On Ice star is now married to Jackie and lives in the States with their baby daughter.

Una has since been linked with Limerick hurling star David Breen.

Metro.co.uk has contacted reps for David and Una for comment.