Theaster Gates Turns the Stain of the Past Into Art

Theaster Gates, a social practice installation artist based in Chicago, is turning the history of Black labor in America on its head. Born in 1973 to a father who was a roofer, Mr. Gates embraced, too, a life of working with his hands. After graduating from Iowa State University with a degree in urban planning and ceramics, he proceeded to Japan to study pottery. In “Black Vessel,” his first New York solo show at Gagosian on West 24th Street, he succeeds in celebrating the rugged, hard work of artisans today.

In “Civil Tapestries,” his seminal series from 2011, the artist used decommissioned fire hoses to link to the actions taken against protesters during civil rights demonstrations. Here, in a new series, “Tar paintings,” installed in two galleries, he employs roofing techniques to move beyond conceptualism into the future. He engages the country’s history — and his own personal one — in this set of works that unfurl with gritty magnificent broad strokes. By creating these pieces with industrial materials such as torch down and tarred fragments, he is able to merge the language of abstract art with the legacies of racial injustice, while simultaneously engaging with the history of painting itself.

Growing up in Chicago, Mr. Gates sang in a Baptist church, which sparked his interest in spirituality and music. Before Japan, he lived in South Africa, receiving a degree in Religious Studies. These inspirations may have influenced his creation of a room full of glazed and fired clay vessels that draw from Eastern, Western, and African instruments. Walking in this room, with sculptures placed on low pedestals, feels like being among living ritual objects: although static, they weigh heavily with silence. But the display also suggests a kind of joyful noise: the most striking vessel — a gourd with spikes — recalls the Yoruba sekere, an instrument made from a dried gourd covered in woven beads, present at the site of celebrations. In making the pieces here the artist stretches himself the most. (The gallery offers in its promotional material an image of him, a workman in his studio, hacking away at clay, and turning the shapes within a fire.) 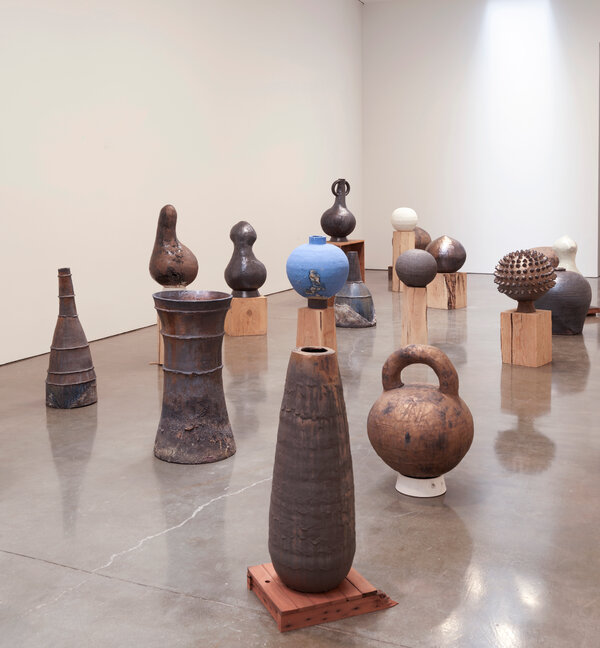 Although smoother than the fired-brick sculptures in “Brick Reliquaries,” the first of four galleries in the exhibition, Mr. Gates’s vessels retain the roughness that pervades the whole show, so that traveling through the gallery one is reminded of the cracks in the tar paintings.

In the show’s biggest room, Mr. Gates fortifies the walls entirely with Roman bricks from remainders blackened with manganese dioxide and dye. The room becomes another vessel, dark like an ark shut out from the world. And Mr. Gates, too, like the biblical Noah whose task was to save the earth from the Great Flood, uses his ark to salvage things. In “New Egypt,” a wooden architectural piece housing the complete bound set of Ebony magazines that from 1945 to 2016 promoted the realities of the Black American middle-class, he refers to the Black Power movement with red, black and green covers.

The room also contains “Walking Prayer,” a long historical collection of published books on the Black experience, with some cases yet to be filled. Rebound in black and embossed with words of the artist’s choosing, the shelf becomes a long poem flowing from row to row. Behind the books, a Leslie speaker sits in the corner, stuck on a single chord from a Hammond B3 organ, reminiscent of Black church music. In Noah’s attempt to perpetuate life, before locking himself up in his ark for months, he stored animals and paired them to make it possible for them to reproduce after their release. But Mr. Gates’s ark seems to be permanently locked, making space only for additions to this history but not a release from it.

The fortified room at the Gagosian is not the first time Mr. Gates has worked in this way with restoration. In 2015 he transformed an abandoned, crumbling bank building on Chicago’s South Side — a neighborhood where over 93 percent of the residents are African-American — into a gallery and community archive. To reproduce something similar, this time in a highbrow gallery, raises a question about what happens when social practice objects are entangled in commerce. This is a delicate dance, attempting to woo both audiences at the same time, but one that the artist performs well.

Mr. Gates’s decision to use metals, clay, tar, and bitumen places him within a rich history of art in the last half century with political and social roots. He seems to be drawing on artists like Alberto Burri and Donald Sultan, who have pushed the boundaries of painting in similar fashion — and drawing on more than just their forms, but also meanings. (Burri’s paintings, with their roughness, tears and incompletion, were a response to the traumas of war, the Holocaust, and the Bomb).

The show is full of earthiness as a result. There is the sense of a coordinated blemish, accentuated by smeared surfaces. The smudges bring to mind the story of a Maryland slave owner, Col. Edward Lloyd VI, who, in the mid-1800s, cultivated a large, beautiful garden that attracted visitors from far and wide. Then its fine fruits began to attract other visitors: his hungry slaves. At first Lloyd whipped those caught stealing but he soon realized this was not enough to deter them. In the end, he tarred the garden’s fence, and if a slave was caught with tar marks it became proof that the person had tried or succeeded in stealing. “This plan worked well,” the African-American abolitionist Frederick Douglass wrote in his autobiography, adding “the slaves became as fearful of tar as of the lash.”

Some 200 years ago, to survive in America, Black people had to escape defilement. To be smeared with tar was literally to die. Mr. Gates has embraced this stain, turning it into art. America’s past is irredeemable, as difficult to wash off as tar. One hopes that with his gesture, a part of its future might still be salvaged.