Home » Entertainment » The Year in Improvised Music: ‘Everything’s Changing. So the Music Should.’ The Year in Improvised Music: ‘Everything’s Changing. So the Music Should.’

When concerts and in-person gatherings shut down this spring, livestreamed shows quickly started to feel like a glorified last resort. I found myself avoiding them. But a Facebook video caught my eye one day in June, of the trombonist Craig Harris performing at the Brooklyn Botanic Garden. Accompanied by the keyboardist Pete Drungle, framed by a flowering grove and a trellis, he played “Breathe,” a suite of concise and soothing music that sounds like the sum of Mr. Harris’s experiences on the New York scene since the 1970s.

He had written “Breathe” after Eric Garner’s killing by New York police in 2014; it was his reflection on the notion of breath as a great equalizer, and as the source of Mr. Harris’s own powers as a trombonist. But at the start of this video, he turns to those affected by Covid-19. He offers the suite as “a sonic reflection for those who have passed, and those who are born,” Mr. Harris says. “We have to think about the lives of the people who are born in this period now. That’s a whole thing, the beginning and the end.”

The performance was taped in May, before George Floyd’s killing in Minneapolis and its nightmarish resonance with Garner’s death. By the time Mr. Harris’s video was released in June, protesters were constantly in the streets, and the suite’s original message had become painfully relevant again. But even in this new light, the poise and sensitivity that Mr. Harris had intentionally brought to this performance didn’t feel out of place.

For any lover of live performances — but especially jazz and improvised music — 2020 will be remembered, joylessly, as the year of the stream. Musicians have done their best with what they’ve had, usually by leaning into intimacy; we saw a lot of artists’ bedrooms this year. But it was actually in the moments when musicians zoomed out — when they made our perspective bigger, and connected this difficult moment with a greater sense of time — that improvised music did its most necessary work.

With concerts impossible, the vocalist and interdisciplinary artist Gelsey Bell assembled “Cairns,” a remarkable audio tour of Green-Wood Cemetery in Brooklyn; it’s part philosophy talk and part experimental music composition, built of Ms. Bell’s overdubbed vocal improvisations and the sounds of the cemetery as she walks.

Green-Wood is a majestic place, and there is something robust and alive about it, even though generations of history lie in its soil. “As I started making it, I was really thinking about our relation to the land and the history it holds, and then where we find ourselves now,” Ms. Bell said of “Cairns” in an interview. “To be connected to the land you live on is to be connected to both its history and the other people that you’re sharing space with.”

On the hourlong recording, Ms. Bell tells of various little-known but significant figures, using their histories to illuminate what she calls “the apocalyptic foundations of this place.” And she gives us the histories of the trees, instructing us to listen to the ways they sing to each other, and will continue to after we’re gone.

Hiking up a hill, Ms. Bell turns the sounds of her breathing and walking into a kind of mulchy, rhythmic music. “Because of breath, we’ll never forget how stuck in time we are, how mortal we are,” she says, making the word “mortal” sound like a good thing.

It wasn’t impossible to make music via stream that really pulled people together — just rare — and on this front, couples had an advantage. The week that the Centers for Disease Control and Prevention recommended all concerts be put on hold, the vocalist Cécile McLorin Salvant and the pianist Sullivan Fortner propped up a camera beside the piano in their living room and broadcast a set of music via Facebook to thousands of viewers. The comments section turned into a chattery town square, full of nervous and grateful people unsure of what the coming months would bring.

The bassist Dezron Douglas and the harpist Brandee Younger started performing duets from home every week, ultimately collecting them in a disarming album, “Force Majeure,” released this month. The saxophonist Ingrid Laubrock and the drummer Tom Rainey got in the habit of recording their wide-ranging living room improvisations and publishing them on Bandcamp, in a series that continues under the name “Stir Crazy.”

Working alone, the clarinetist Ben Goldberg also started posting daily solo recordings in March on a Bandcamp page labeled “Plague Diary”; it now has nearly 200 entries. Listen for long enough and the tracks of overdubbed instrumentals and low, repetitive rhythms start to run together, like the hazy interminable feeling of existing at home amid lockdown.

The saxophonist Steve Lehman swung in another direction, releasing a less-than-10-minute album, “Xenakis and the Valedictorian,” featuring snippets of exercises and experiments that he had recorded on his iPhone, practicing in his car each night so that his wife and daughter could have peace in the house.

Continuing to perform during the pandemic — near impossible as it often was — was both a creative and a financial imperative for improvisers, many of whom saw all of their upcoming performances canceled in March. But newly liberated from obligation, inspired by the movement sweeping the country, many also began to organize.

Much good critical attention was paid this year in the music press to the ways that our listening habits have had to adjust to lockdown, and to how performances have changed. But what about the institutions that also fell quiet — especially the schools and major arts nonprofits, which have perpetuated massive racial and economic disparities in access to the music? Will they all look the same when things come back online? 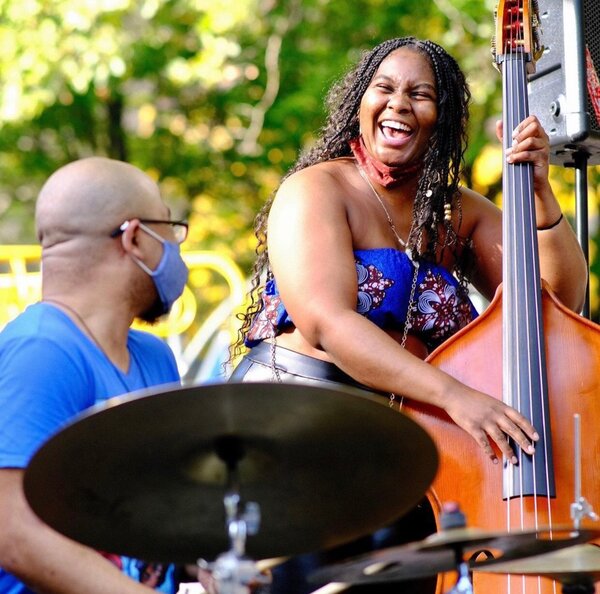 Musicians across the world came together via Zoom to organize the We Insist! collective to address these questions, eventually coming up with a list of demands to promote racial equity in major educational institutions and philanthropic groups in the jazz world. A group of artists of historically underrepresented gender identities came together in the Mutual Mentorship for Musicians collective, striking a creative blow against patriarchy in jazz. And as protests overtook streets nationwide, jazz musicians were often there.

The bassist Endea Owens showed up on the second day of protests in New York back in May, she said in an interview. She almost immediately felt a need to contribute music, and she helped put together bands that played daily at demonstrations over the next three weeks. “We were out there for two to three weeks, walking from Washington Square Park to the Barclays Center, just playing,” she said. “That created a ripple effect of something creative, something positive. You felt like you had to fight for your lives.”

In Harlem, where she lives, Ms. Owens started a monthly series of masked, socially distanced cookout concerts. Using donations as well as money from her own pocket, she has handed out 100 free meals at each one, while paying underemployed jazz musicians to perform. As a member of Jon Batiste’s Stay Human, the house band for “The Late Show With Stephen Colbert,” Ms. Owens has been the rare jazz musician this year who could count on a steady paycheck.

But without nightly gigs, she has still had an excess of downtime. Now that she has made connections with other organizers and mutual aid groups in the area, she is thinking about how to continue that effort into the future, even if the usual work opportunities for musicians come back.

“There’s a big opportunity to make jazz feel more familiar and make it feel more accessible, where anyone can go to these shows,” Ms. Owens said. “I don’t even think it’s possible to go back to the way we did things. Everything’s changing. So the music should. The way we perform, the way we approach it, the places where we have this music.”

Why Thousands Of Women Will Wear Pearls To Celebrate Kamala Harris
01/20/2021
Categories
We and our partners use cookies on this site to improve our service, perform analytics, personalize advertising, measure advertising performance, and remember website preferences.Ok