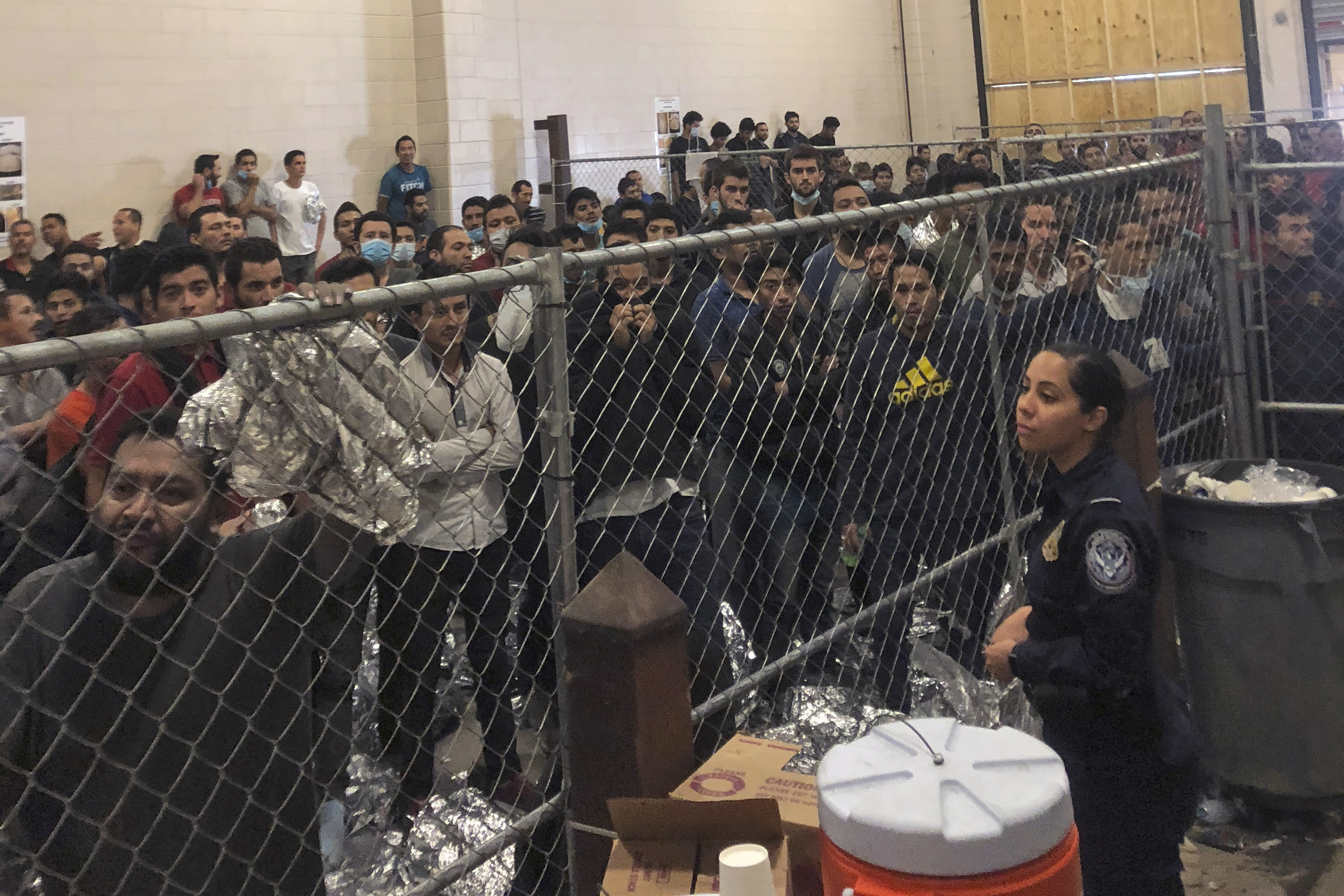 Immigrants stand in an ICE detention pen in McAllen, Texas, during a visit by Vice President Mike Pence.

The Trump administration wants to expand its DNA testing program by enabling Customs and Border Protection officials to extract genetic material from undocumented immigrants in its custody, according to a draft policy obtained by BuzzFeed News.

The move will likely inspire the anger of civil liberties and immigrant advocates, who argue that the government should not draw sensitive personal information from people without being tied to a specific crime.

Administration officials estimate that CBP officials would spend more than 20,000 additional work hours on such a policy in its first year of implementation. Hundreds of thousands of individuals could be tested each year if the draft regulation, proposed by the Department of Justice, is fully implemented.

While the regulation does not specifically say Immigration and Customs Enforcement officials would also test people in their custody, it also does not limit them from doing so.

In a statement to BuzzFeed News, a DHS official said “DHS is working closely with the Department of Justice on a path forward for DNA collection.”

Proposed regulations are not immediately enacted and require a 60-day comment period.

Administration officials cite a statute — the DNA Fingerprint Act of 2005 — that allows federal agencies to test individuals in their custody, including those who are not American. But previous DOJ regulations exempted agencies under the Department of Homeland Security — including CBP and ICE — from conducting such testing in certain circumstances.

In 2010, then–DHS Secretary Janet Napolitano narrowed the exemption, saying people who were not detained on criminal charges and those who were awaiting deportation proceedings would not be DNA tested.

The current draft proposal would cut the exception all together — opening it up to include people who are awaiting deportation and those who are not charged with a crime, such as undocumented immigrants, to the testing.

Trump administration officials argue that the exemption is no longer necessary and that testing would aid border officials in better assessing the individuals who cross into the country without authorization. The DNA results could then be placed into a nationwide database that contains millions of other profiles for hits on potential previous criminal activity, officials explained in the proposal.

Former senior DHS officials said an expansion of DNA testing would likely achieve little, drain resources, and force agents to do work they’d rather not be doing.

“In many ways, it’s unnecessary from a law enforcement perspective,” said John Sandweg, a former senior immigration official in the Obama administration. “I don’t understand what you’re going to get out of it. The idea that some guy crossing the border committed a crime, returned, and came back all undetected is very remote.”

Sandweg said that there was little desire at either ICE or CBP to begin mass DNA testing during the Obama administration.

Such a proposal would also change the way immigrants are treated in federal custody, said Jonathan Meyer, a former deputy general counsel at DHS.

“It would, for the first time in this context, treat undocumented immigrants more like criminals in that DNA testing of this type is used only in a pure criminal context,” he said. “DNA testing is considered one of the more invasive actions that the government can take. You are obtaining a physical substance from a person’s body, with the potential to learn an almost infinite amount of information about the person.”

Civil liberties groups have long challenged the expansion of DNA collection from citizens and noncitizens alike.

“DNA collection programs allow the government to obtain sensitive and private information on a person without any precursor level of suspicion and without showing that the data collected is tied to a specific crime,” wrote the Electronic Frontier Foundation in a statement on federal DNA collection. Federal law enforcement agencies like the FBI generally take DNA samples from arrestees.

In recent weeks, Fox News has interviewed some CBP officials who have called for the agency to DNA test detainees. The US Office of Special Counsel, an independent federal investigative body, wrote to the administration that it needed to comply with the 2005 law. In response, Robert Perez, the CBP deputy commissioner, cited the exception written by Obama administration officials.

The draft regulation states that DHS officials would rely on software that would allow them to quickly obtain DNA from a given person and cut collection time from 15 minutes to 5 minutes. DOJ officials estimate that DHS officers will spend more than 20,000 hours the first year using the software, more than 40,000 the second year, and more than 60,000 the third year.

Shop At Urban Outfitters And Learn The Color Of Your Soul

Can We Guess Your Age Based On The TV Shows You Choose?
Recent Posts