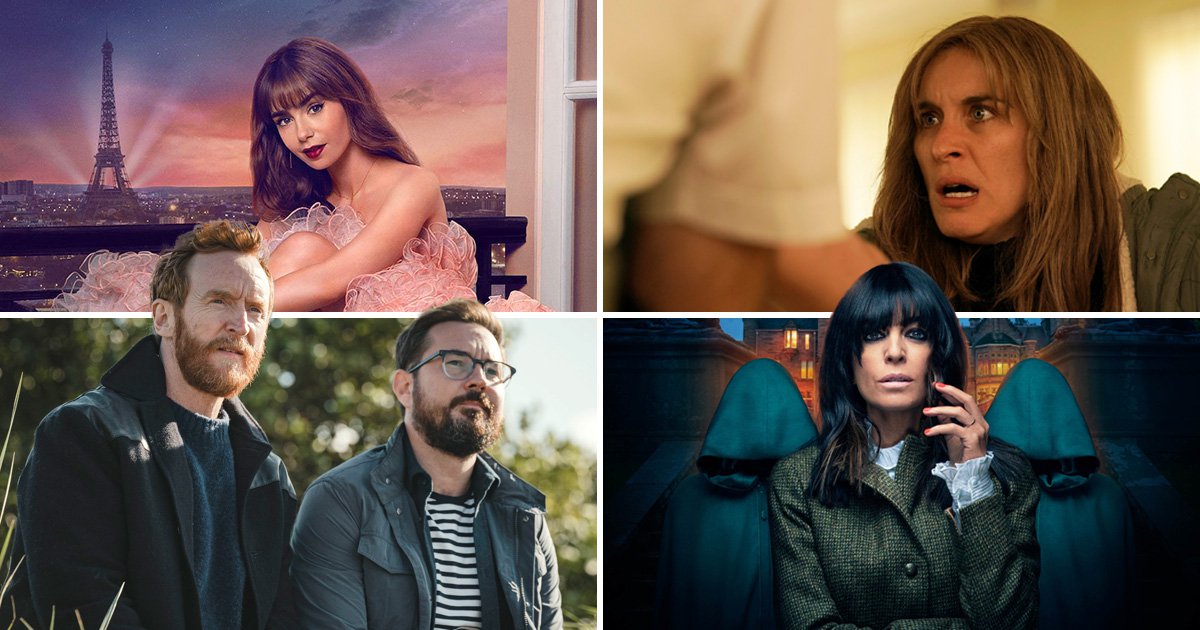 There is perhaps no better time to settle in for a day on the couch than after ringing in the New Year.

Regardless of whether a few too many proseccos last night or chose to turn in early, making the most of the day off doesn’t have to mean setting your resolutions just yet or making your way to the gym to kick start those fitness goals.

Instead, settle in and embrace catching up on some of the most talked about TV in recent weeks.

Whether you’re in the mood for a fast-paced spy thriller, a reality series that will keep you hooked, or a guilty pleasure watch that you don’t need to have all brain cells in peak working condition for, we’ve got you covered.

It might be Emily in Paris that tickles your fancy or emotional drama Mayflies, but you’ll have plenty to choose from.

So get settled in, read on, grab the remote and get watching.

Created by Bridge of Spies writer Matt Charman, Treason stars Charlie Cox (Daredevil) as Adam Lawrence, a high-ranking MI6 officer who’s promoted to chief after his boss is attacked in this spy thriller.

The five-episode series follows Adam after the arrival of Russian spy Kara (Olga Kurylenko), a figure from his past whose re-emergence has an impact on both his career and his relationship with wife Maddy (Oona Chaplin).

It all culminates in a jaw-dropping finale that you likely won’t see coming at all.

This will be sure to wake you up after a big night out.

The third and final season of this British crime drama starts tonight, with Sarah Lancashire back as Sergeant Catherine Cawood.

With the second season winding up with Tommy (James Norton) locked up behind bars and his son Ryan (Rhys Connah) curious to learn more about the father banished by Catherine, there’s set to be just as much drama than ever before when Happy Valley returns.

In a synopsis, the BBC revealed that this time around Catherine will discover the remains of a gangland murder victim in a drained reservoir, which will spark a chain of events that lead her straight back to Tommy.

‘Ryan is now 16 and has ideas of his own about the kind of relationship he wants to have with the man Catherine refuses to acknowledge as his father, leaving Catherine’s sister Clare (Siobhan Finneran) caught in the middle,’ it added.

After a six-year wait, don’t miss this gripping final run.

Aits tonight from 9pm on BBC One.

The concept of this reality series sounded simple enough when it first hit our screens—22 strangers arrive at a castle in the Scottish Highlands as ‘Faithful’ contestants and are hoping to share a prize pool worth up to £120,000.

However, amongst them are ‘Traitors’ that must be identified and ‘banished’ before they have a chance to get to the end and possibly take all of the winnings home themselves.

If you somehow made it to the end of the year without catching up on this gripping show, now is the perfect time to spend an entire day investing in what some have called ‘the most thrilling reality series of all time’.

While there are still shows that can get people talking and obsessing over what might unfold next, but there was something special about seeing what was essentially a social experiment unfold as people decided whether they would be willing to lie and backstab to make it to the end.

There’s a very good chance you might have already watched all episodes of this guilty pleasure drama, but even if you have, why not enjoy a little escapism and pretend you’re gallivanting around Paris in designer clothes rather than the probable reality of hiding under a blanket in your pyjamas at 3pm.

While not without its controversy after being accused of presenting outdated stereotypes of the French in seasons past, the charm of Emily in Paris lies within the fact it’s never trying to be a high brow drama.

Instead, it’s a light-hearted watch as we follow marketing executive Emily (Lily Collins) navigate life in the most romantic city in the world whilst coming up against career curveballs and love triangles.

And who can forget the fashion, which is half the fun of watching.

Didn’t quite get that New Year’s kiss you were looking for or did your night end up anything how you were imagining it?

If you’re wanting a good dose of perspective, or just a great chance to have a little cry, this two-part series which aired earlier this week is guaranteed to get the waterworks going.

Mayflies stars Martin Compston and Tony Curran as best mates Tully and Jimmy who have been friends since 1986 after meeting in Scotland.

Thirty years later, Jimmy received a heartbreaking phone call from Tully that he has terminal cancer, and asks for help to end his own life.

As the synopsis said: ‘The friendship that defines your life – and will push your loyalty to the limits.’

Get the tissues ready.

We don’t have long to wait for the new season of Love Island, but if you’re wanting another reality series set in the sun (this was filmed on Greece’s Aegean Islands in the warmer months) to dive into, this is it.

Released this week, Loaded in Paradise sees five sets of duos go up against each other with the aim to get their hands on a Gold Card, which gives them €50,000 at their disposal.

Only one team can have control of the card at one point, and while they can splash the cash how they want, whether it be fancy dinners or trips on luxurious yachts, those without will have to learn to live on far smaller budgets than what they are used to.

They’ll all have the chance to engage in game-playing strategies and dupe each other, however there are also some people who are there wanting to strike up a holiday romance.

A big twist has also been promised.

This is England ’86 co-stars Vicky McClure and Johnny Harris are reunited in this crime drama, which was inspired by the idea of restorative justice.

It follows grieving mother, Stella Tomlinson (McClure), whose 14-year-old daughter Maisy, is found dead at their family home with the bloodied, hooded figure of Charles Stone (Harris) standing over her.

Years later Stella is clearly struggling, not only dealing with her daughter’s death but her subsequent marriage breakdown, which has left her cut off from her friends, smoking too much weed and giving up her career.

However, when a chance to meet her daughter’s murderer arises, she takes the chance to play a part in a restorative justice program.

But when their first session ends in Johnny claiming he wasn’t responsible, it sets off a chain of events that offer up dead ends and red herrings that will wake you right up.