The T List: Five Things We Recommend This Week

Welcome to the T List, a newsletter from the editors of T Magazine. Each week, we’re sharing things we’re eating, wearing, listening to or coveting now. Sign up here to find us in your inbox every Wednesday. And you can always reach us at [email protected].

The Colorful Canvases of Stanley Whitney 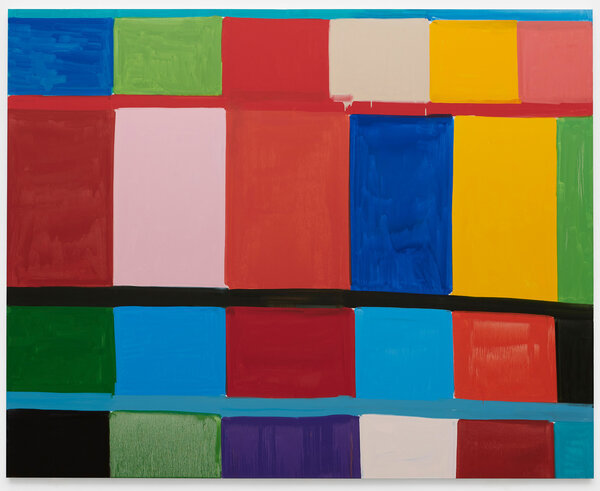 For the past 25 years, the painter Stanley Whitney, a veteran of New York’s abstract school, has mined the formal, political and emotional power of color, covering canvases with grids of rich, saturated hues. In keeping with the recent spate of shows dedicated to the work of Black abstract painters, last week saw the opening of the artist’s first major solo exhibition in Los Angeles, “Stanley Whitney: How Black Is That Blue,” which comprises a suite of 11 works he created last year and is spread across Matthew Marks’s two galleries there. The 8-by-8-foot title painting is punctuated with a small black square, highlighted with cerulean and midnight edges, that sits atop a block of lush, opaque azure in the upper left-hand corner of the canvas — a microcosm of the many alluring blues and blacks, along with striking golds, reds, pinks and greens, that echo throughout the show. In “Twenty Twenty” — the largest work on view, at 12 feet wide by 8 feet high — a thin blue line careens off the lower portion of the canvas, tracked by another, in black, that runs parallel to it. The titles of Whitney’s paintings are often plucked from his favorite lines in songs or books. “How Black Is That Blue” is lifted from a poem by Osip Mandelstam, but it’s also reminiscent of the jazz standard immortalized in Louis Armstrong’s rendition of “(What Did I Do to Be So) Black and Blue.” (Jazz has long influenced Whitney’s paintings.) The works “can have all of these connotations,” says Jacqueline Tran, the gallery’s senior director, “in addition to presenting a formal question about color.” Indeed, each of these paintings, which seem to submerge the viewer in their radiant density of pigment, affirms the truth of Whitney’s assertion that “color brings so much emotion and depth to people.” “Stanley Whitney: How Black Is That Blue” is on view through April 10 at Matthew Marks Gallery, 1062 North Orange Grove and 7818 Santa Monica Boulevard, Los Angeles, matthewmarks.com.

Bucolic Chalets Perched Among the Alps

Nestled in the pristine alpine hamlet of Les Giettes, in Switzerland’s Valais region, the eco-friendly Whitepod resort offers a resplendent way to experience the Alps. Designed in 2004, it includes 18 single-room geodesic domes in which guests can enjoy an intimate getaway with views over the city of Monthey. But those looking for a bit more space are also in luck: Last year, the property added nine wooden chalets (with plans to build 12 more), designed by the Californian-Swiss architecture firm Montalba Architects to resemble a mountain village. Each comprises multiple bedrooms, a living room and a dining room, and, in keeping with the hotel’s mission to offer both luxurious and environmentally sound accommodations, is energy efficient, with electricity supplied from turbines powered by mountain spring water. Made entirely of Swiss materials — including zinc roofing and exterior cladding fashioned from larch — the chalets also feature solid cedar tables by the Italian design studio Durame and raw fiber bed frames by the Swiss sleep company Elite. Guests awaken to expansive views of the surrounding forest and Lake Geneva, and are greeted with a breakfast of local specialties — including buttery croissants and levain bread served with apricot and raspberry jams — delivered to their door via an electric food truck. The generous spread is necessary sustenance for a day spent on the property’s 15 miles of hiking routes and slopes for skiing, snowboarding and snowshoeing. Chalets start at around $730 a night, whitepod.com.

Loose-Leaf Tea Inspired by the Ritual of Gong Fu

Whenever Diana Zheng, who moved to the United States as a child, returned to the Chaoshan region of China, she would reunite with family over endless rounds of gong fu tea. The custom, a centuries-old ceremony that makes use of small vessels that “force you to pay attention: to the brewing, serving, sipping and to the people around you,” she says, inspired Zheng, who is now based in Los Angeles, and Ayumi Takahashi, her business partner, to start Three Gems Tea, a line of loose-leaf infusions and tea ware, in 2019. The brand currently offers six oolong varieties, all of which are sourced from family farms in China and Taiwan that use biodynamic and organic growing practices. There’s the lightly roasted Forever Spring, with notes of honey and gardenia, as well as Sweet Cassia Rock, a dark roast from Fujian’s Wuyi mountains, with hints of earthy plum and caramel. My favorite, though, is Midnight Blossom, a dancong varietal from China’s Phoenix Mountain, with long, twisted leaves and a rich aroma of jasmine and wood. Also available is a brightly colored gong fu tea set, handcrafted in Jingdezhen, China’s ceramics capital, by the husband-and-wife team of Studio Kaiwu, who create contemporary pieces in porcelain. Later this year, Three Gems will release an herbal line, with ingredients sourced from sustainable growers throughout California and paired with tea ware from the L.A.-based ceramist Eunbi Cho. Further down the road, Zheng and Takahashi envision a series of offerings from Japan, where Takahashi currently lives, a continuation of their pledge to bridge Eastern and Western cultures one sip at a time. From $6, threegemstea.com.

“My aesthetics in design come from me as a kid, clothed, realizing nothing fit me. It’s like the education system: standardized. And we’re all custom,” said Ron Finley, the Los Angeles-based activist and fashion designer, who recently teamed up with the biodegradable, recycled cotton and gender-neutral clothing brand Everybody.World on a new line of basics: wide-leg pants, shirts and hoodies emblazoned with the words “Integrity” and “Awareness,” floral-print bandannas and canvas bags. Ten percent of proceeds (which will be matched by Everybody.World) from the hoodies, bags and pants, and 100 percent of proceeds from the shirts and bandannas, will go to Finley’s namesake nonprofit. Finley’s activism first made headlines over 10 years ago when he planted a garden in the curb space in front of his house in the South Central neighborhood of L.A. Unbelievably, he was threatened with arrest; today, the landscaping laws in California have changed as a result of his resistance (and he now offers a popular master class). Finley is philosophical and holistic about his work — “This is another form of design,” he said on our Zoom call, waving an arm at the lush greenery behind him. Gardening to him is more than just an activity; it’s a way of life. He added: “Just get back to what truly has value and realize that those new phones, that new car — nothing you can buy gives you value. The only thing that gives you value is you and your integrity.” The campaign, which was inspired by the palette of nature (pomegranate red pants, lemon yellow sweaters), also features two of Finley’s three talented sons, Azzedine and Kohshin (an artist), who helped with the collection’s designs. Sometimes, it just runs — or grows — in the family. The Everybody.World by Ron Finley collection starts at $20, everybody.world.

Housewares From a New Online Boutique

Though Shinichiro Ogata’s portfolio is wide-ranging — he is a chef and restaurateur, a designer and an architect — everything he does is in pursuit of saho, or the Japanese art of being. Nowhere is that plainer to see than at Ogata Paris, which opened in a former hôtel particulier in the Marais in December of 2019. Inside the impeccably renovated space, visitors can sit in the bar, restaurant or tea salon, or they can browse art, tea blends, sweets and a whole host of housewares to take with them when they go. Now — and rather conveniently, given current travel restrictions — many of those same items can be purchased via Ogata Paris’s new online boutique. There, too, the breadth of Ogata’s creative vision is on display, but to my mind a hammered-pewter chirori, or sake server; a delicate lacquered-paper plate; and a vibrant selection of hitokuchi-gashi — bite-size confections such as a candied chestnut wrapped in bean paste and served with tea — are among the highlights. For Ogata, tea is a way of fostering human encounters — “a medium [through which] to meet people and share our sensitivity,” he wrote via a translator — but even in times when those encounters are necessarily fewer and farther between, we can still find a bit of comfort by seeking beauty. onlinestore.ogata.com.

In Mexico, Homes That Encourage Introspection

Seen from its suburban street in Guadalajara, the capital of Jalisco State in western central Mexico, Casa Padilla looks less like a house than like a monastery: a blank white wall marked with a broad crescent downspout and a plain cedar door. Barely seven feet high, the door opens into a small, shaded vestibule that ends in another door, this one leading to a bright, sunlit courtyard hemmed in by ecclesiastical walls. Designed in 1989 by the now 63-year-old architect Hugo Gonzalez — who is revered in Guadalajara’s tight-knit design community but little known outside it — the 8,600-square-foot house is not so much a structure as it is a narrative, never legible in its entirety. If the fragile glass jewel boxes of high Modernism and concrete bunkers of Brutalism embrace radical transparency, then Casa Padilla is rooted in an older, liturgical logic of mystery and awe. In fact, it is one of many designs in and around Guadalajara that build on the legacy of Luis Barragán and others in their privileging of introspection. For more, visit tmagazine.com — and follow us on Instagram.