Home » The T List: Five Things We Recommend This Week The T List: Five Things We Recommend This Week

Welcome to the T List, a newsletter from the editors of T Magazine. Each week, we share things we’re eating, wearing, listening to or coveting now. Sign up here to find us in your inbox every Wednesday. And you can always reach us at [email protected].

A California Retreat With Scandinavian Charm 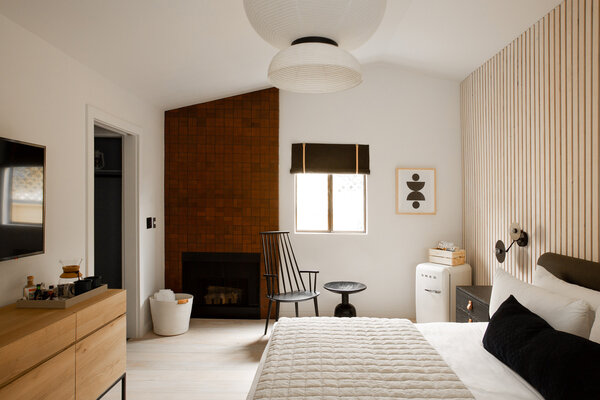 Set on Moonstone Beach in Cambria, one of the most serene stretches of California’s Central Coast, White Water is a boutique-style lodge and the first hotel project from the Los Angeles-based interior designer Nina Freudenberger, known for her modern, beachy décor. The only luxury-minded property in the area, the estate was once two cottages that have since been combined into one, with a charcoal wood-lap-siding exterior that features olive accents reminiscent of the region’s native Monterey pines, and whitewashed interiors that reflect the town’s relaxed seaside vibe. The lobby and common area — whose design is inspired by 1970s Scandinavia and bohemian California culture — includes a library stocked with antique board games and vintage National Geographics, while the cabin-style rooms and suites feature Baltic birch desks and coffee tables, along with artwork by the design studio Block Shop Textiles. During their stay, guests can cozy up beside their in-room fireplace while enjoying sunlit views of the Pacific Ocean. Rooms start at $299, whitewatercambria.com.

Last year, before the pandemic, Treana Peake visited Aboubakar Fofana, an indigo farmer in Mali. Peake is the founder of Obakki, a lifestyle brand that sells homewares, skin-care items and design goods made by artisans from around the world out of its Vancouver, British Columbia, shop and website. Mali’s tourist market had been wrecked by the destabilization caused by Islamist rebel groups active in the region; Peake and Fofana traveled discreetly around the country to meet other local artisans and makers. There, Peake encountered a man named Amadou, from the Dogon tribe, who had been “forced to earn a living from the scraps of materials left behind by Western logging companies who considered them to be ‘unsuitable’ for their high-end mass production furniture,” she explains. As a result, Obakki began a partnership with Amadou to sell his hand-carved bowls and spoons to a broader market. Peake, who has over 30 years of experience in international development, works thoughtfully to ensure that such partnerships are not only sustainable but ethically set up to allow for the craftspeople’s long-term success. There’s much to browse on Obakki’s site, from a newly launched set of earthenware from Akiliba, in northern Uganda, where a group of artisans support their entire community with their pottery, to a beautiful collection of cold-pressed shea-butter soaps made in collaboration with communities of women in various regions throughout Africa. “Ultimately, we want to bring beautiful, handmade products into people’s homes so we can create more tangible change,” Peake tells me. “For me, sitting behind a desk in the Western world and claiming you are being sustainable simply isn’t enough. It’s important to dig deeper so that we’re part of a solution, not creating more problems.” obakki.com.

The Japanese artist Yayoi Kusama grew up among the greenhouses and fields of her family’s nursery in the mountainous city of Matsumoto. Now, “Kusama: Cosmic Nature,” a new show at the New York Botanical Garden, explores her relationship with the natural world. Visitors will find themselves transported to a fantastical outdoor scene, complete with multiple flora-inspired installations that are on display across the grounds’ 250 acres. Included are Kusama’s famous spotted “Starry Pumpkin” (2015), which sits in the Haupt Conservatory, and the artist’s oversize fiberglass tulips, “Hymn of Life — Tulips” (2007), which are placed alongside real ones at the Conservatory Courtyard Hardy Pool — both works creating an intriguing juxtaposition of the natural and the synthetic. In another greenhouse, visitors are encouraged to plaster the furniture and walls with stick-on flowers as part of her ongoing interactive “Obliteration Room” series. Among the other highlights of the show, which took three years to come together, are a series of new bronze and aluminum sculptures created exclusively for the NYBG, as well as sketches of tree peonies the artist created in her teenage years, on view in the institution’s LuEsther T. Mertz Library Building. Of course, a Kusama exhibition wouldn’t be complete without a walk-in “Infinity Mirrored Room” installation. This one, “Infinity Mirrored Room — Illusion Inside the Heart” (2020), is slated to open in the summer, when C.D.C. guidelines allow, and reflects the tranquil scenery of the surrounding gardens. “Kusama: Cosmic Nature” is on view through Oct. 31 at the New York Botanical Garden, 2900 Southern Boulevard, Bronx, N.Y., nybg.org.

The Toylike Ceramics of Daniel Mandelbaum

It’s no surprise that the Brooklyn-based ceramist Daniel Mandelbaum’s clay characters caught the attention of the New York curator and collector Raquel Cayre. The three-dimensional squiggles and abstract figures share a certain irreverence with the work of the Italian designer Ettore Sottsass, who founded the influential Memphis Group in 1980 and who has loomed large in Cayre’s own career: She got her start sharing vintage images of colorful interiors through an Instagram account named in his honor while working as an independent furniture adviser. Like Sottsass, Mandelbaum has fun with his work. “There are figures I go back to because they make me smile or laugh,” he says. “Some of the sculptures could almost be toys.” He and Cayre met in 2019, when he was assisting the New York-based ceramist Bruce Sherman, and stayed in touch. This week, their two-year-long dialogue culminates in a series of 25 pottery pieces that Mandelbaum made last year and that Cayre will exhibit through Open Source, the online showroom-cum-store she launched in November of last year as a platform for selling design objects in a transparent, direct-to-consumer format. Ranging from “Lemonade Hamsters,” a pair of vaguely Cubist 5-by-7-inch renderings of furry creatures glazed in pastel pink and yellow, to “Phillip,” a 20-by-19-inch robotlike figure with a quizzical face and an array of irregularly shaped appendages in sky blue, chartreuse and emerald green, the sculptures demonstrate Mandelbaum’s sense of play and his wide variety of influences, which include pre-Columbian art and modern masters such as Constantin Brancusi and Isamu Noguchi. “Dan is an artist’s artist,” says Cayre, but what excites her most is his ability to “turn lifeless clay into something animated.” raquelcayre.com.

In Atlanta, an Exhibition of Photography Made Exclusively by Women

Opening this week at the High Museum in Atlanta is “Underexposed,” an expansive exhibition that highlights female photographers from the past century. Arranged roughly in chronological order, the show, which was curated by Sarah Kennel, features over 100 works and illustrates the ways women have advanced the discipline — in fashion and documentary photography, advertising and journalism, and experimentations with the technological aspects of the medium itself, including Anna Atkins’s mid-19th-century cyanotypes as well as Meghann Riepenhoff’s more modern iterations of the same sun-printing technique. The first half of the exhibition looks at the practitioners who emerged as pioneers (Dorothea Lange, Ilse Bing), while the second reckons with the ways women have turned to photography not only as a medium of documentation or self-expression but also as one that directly interrogates issues of race and gender (as with Mickalene Thomas’s “Les Trois Femmes Deux,” from 2018) and dismantles stereotypes around femininity and domestic life (see Sandy Skoglund’s “Gathering Paradise,” from 1991). Alongside women who are only just getting their due, like Marion Palfi, an early portraitist and German immigrant who documented segregation in the South beginning in the 1940s, are contemporary makers such as Nan Goldin, Carrie Mae Weems and Sheila Pree Bright. And yet all the artists featured in the exhibition are, in their way, examining “the complexity not just of identity but of the whole act of power relations behind photography,” says Kennel. “Underexposed: Women Photographers From the Collection” is on view from April 17 through Aug. 1 at the High Museum of Art, 1280 Peachtree Street, Atlanta, 30309, high.org.

Kehlani Opens Up About Being A Queer Musician And A Mom

The Quarantine Stream: '13 Going on 30' May Be Silly, But It's Irresistibly Charming
Recent Posts