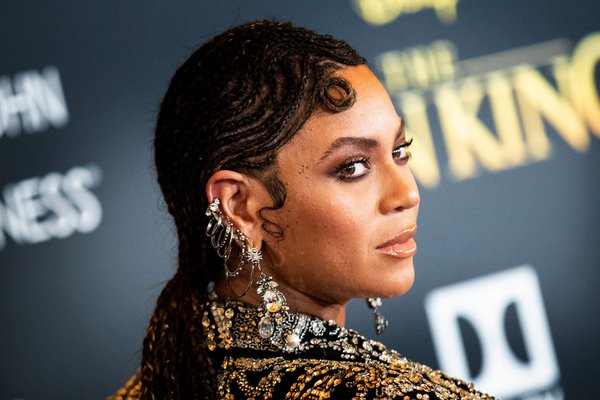 Beyoncé brings full gospel dynamics — and sets aside the original Broadway score — in her showpiece for the remake of “The Lion King.” She belts, “Your destiny is coming close — stand up and fight!” The song’s intro chants “Long live the kind” in Swahili, but Beyoncé’s exhortation is not just for this lion king — it’s for every righteous striver facing doubts. Her vocal, urged on by a choir, builds in wave after wave, from breathy eagerness to full-throated cry, then topped by a different kind of humility at its peak: just piano and Beyoncé’s soprano, envisioning a biblical transcendence, “to be one with the Great I Am.” JON PARELES

The good news is that even though pop music has iterated past him a couple of times over, Justin Bieber is nimble enough to keep up. On this new version of Billie Eilish’s swinging “Bad Guy,” Bieber sings with the same robot-doing-cabaret cadence as his host. He touches on his tattoos, his jewelry, his desire for more sleep — a Sinatra for the SoundCloud era. JON CARAMANICA

Angelica Garcia, ‘It Don’t Hinder Me’

A convincing Southern-rock stomper from Angelica Garcia, who has a ferociously quavering voice and an even more ferocious sense of purpose. “It Don’t Hinder Me” is a statement of cultural pride and social resistance: “I want the cooking that my grandma made/I want the bed that I was yelled at to make.” This sharp song is rowdier and swampier than Garcia’s 2016 debut album “Medicine for Birds,” a sign of a singer getting ever more comfortable, and ever less bothered. CARAMANICA

As of now there is no American award — not the Grammy, not the Pulitzer, not the Oscar or the Tony — that could adequately reward the miracle that is the never-ending rollout of “Old Town Road.” Each time it courts death, it pivots. This latest version is the one you’d ask for in a fantasy but never think was possible. Billy Ray Cyrus is still here, crooning. And then there’s Young Thug, less nonsensical than usual, game to be in on the joke. But the crowning moment is at the end, with the arrival of the viral yodeling preteen Mason Ramsey, who shows up to sing about his Razor scooter, cows and his giddy-up. It’s the perfect twist ending to this internet-born-and-enabled saga: meme recognize meme. CARAMANICA

Ed Sheeran: Successful enough and powerful enough and deep enough into his career to orchestrate an opportunity to rap on the same song as Eminem and 50 Cent; rhymes “misfit” with “Ipswich.”

Eminem: Far enough removed from the peak of his success and the peak of his talent that the opportunity to rap alongside Ed Sheeran is not an automatic no; over-delivers, perhaps out of mild embarrassment.

50 Cent: Tries out a Sugarhill Gang flow, hopes no one is looking. CARAMANICA

Swelling, underwater electric bass; a grainy, distorted guitar that travels from woozy chords to neatly chopped rhythm; a high, corkscrewing horn part that could have been plucked off a radio signal in the Balkans, or maybe North Africa. You’d expect nothing less than this absorbing mix from Nérija, a septet to watch of young London musicians. The group includes the much-discussed young tenor saxophonist Nubya Garcia and the trumpeter Sheila Maurice-Grey, who wrote this tune and takes a rewarding solo across most of the track. Nérija has a debut album, “Blume,” due Aug. 2. RUSSONELLO

Here’s a song about dreaming about a song about death: “It had the most moving chord changes/She was certain the lyrics went about burying someone’s ashes and then having a cigarette.” Jenny Hval starts it as a bemused incantation over misty chords; then the beat comes in, the keyboards start answering her with hooks, and her meta-pop musings verge on turning into pop themselves. PARELES

Anna Meredith writes chamber music with a minimalist’s fondness for repeated motifs and a rocker’s willingness to kick. The ingenious video for the instrumental “Paramour” diagrams it as a frenetic electric-train ride amid the hard-working ensemble — clarinet, keyboards, cello, drums, tuba, electric guitar — pointing up just how many motifs Meredith mobilizes and tosses aside in only five minutes. PARELES

Victor Gould never sounds totally at ease at the piano, but that doesn’t mean he’s not in control. He plays in shapely, looping harmonies, with debts to Hank Jones and Cedar Walton, but there’s some physical conflict, some audible work, in each gesture. This is what sets him apart and underneath the sturdy, well-balanced flow of his arrangements, it’s the real reward. “October” gives a glimpse of his skills as an arranger — here, for jazz sextet and strings — and his increasingly distinctive voice as an improviser. The track comes from Gould’s new album, “Thoughts Become Things.” RUSSONELLO

Jon Pareles has been The Times’s chief pop music critic since 1988. A musician, he has played in rock bands, jazz groups and classical ensembles. He majored in music at Yale University. @JonPareles

Jon Caramanica is a pop music critic for The Times and the host of the Popcast. He also writes the men’s Critical Shopper column for Styles. He previously worked for Vibe magazine, and has written for the Village Voice, Spin, XXL and more. @joncaramanica

14 Dog Posts From This Week That Absolutely Ooze Dogiliciousness