Home » Entertainment » ‘The Falcon and the Winter Soldier’: What You Need to Know ‘The Falcon and the Winter Soldier’: What You Need to Know

Two faithful sidekicks become leads in “The Falcon and the Winter Soldier,” a new superhero series premiering Friday on Disney+. This show takes place some time after “Avengers: Endgame,” when the newly retired super-soldier Steve Rogers (Chris Evans) announces his retirement as the patriotic hero Captain America. Rogers also gives his red, white and blue Vibranium metal shield to Sam Wilson (Anthony Mackie), a retired Air Force veteran who as “The Falcon” flies around with a jet-powered winged harness.

Wilson’s implied promotion is, however, supported by Bucky Barnes (Sebastian Stan), Rogers’s childhood best friend and World War II sidekick. Throughout most of the M.C.U. movies, Barnes and Rogers have not biologically aged since the 1940s — both men were frozen alive, though under very different circumstances, and then revived by super scientists decades later. Rogers was resuscitated by the American spy agency S.H.I.E.L.D. in “Captain America: The First Avenger,” while Barnes was both preserved and awakened by the ex-Nazi terrorists Hydra, as we see in a flashback during “Captain America: The Winter Soldier.”

Barnes and Wilson also have a complicated relationship, though they have never really been rivals. To help better understand the frenemy tension that unites them, here are some of the key moments from the comics and movies that have led up to “The Falcon and the Winter Soldier.” Major spoilers follow.

The Rebirth of Bucky Barnes

In “The First Avenger,” Barnes and Rogers fight the Nazis during World War II but are separated in 1943 after Barnes falls off a moving train while pursuing the Nazi scientist Arnim Zola (Toby Jones). He survives the fall but loses his left arm. It’s revealed later in “The Winter Soldier” that Zola, working for Hydra, captured Barnes and replaced his missing arm with a robotic prosthetic. Barnes’s abduction and revival are briefly shown through flashbacks in “The Winter Soldier” and “Civil War.” 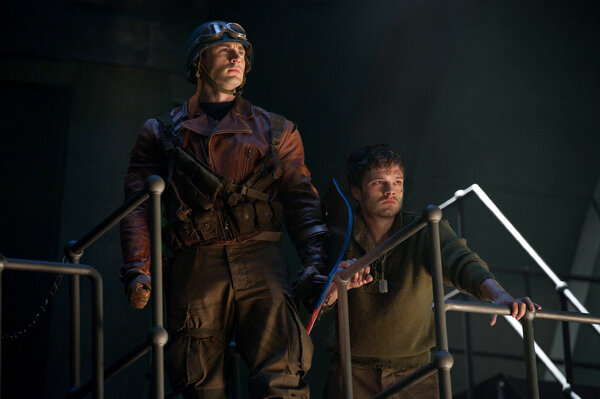 Hydra renames Barnes “the Winter Soldier,” and trains him as a political assassin. In “Civil War,” we learn that Barnes is responsible for the murder of the weapons contractor Howard Stark (John Slattery) and his wife, Maria (Hope Davis) — the parents of the reformed industrialist Tony Stark, who fights crime as Iron Man (Robert Downey Jr.).

As we see in a flashback at the start of “Civil War,” Barnes killed Tony’s parents in 1991 after Hydra’s Russian scientists revived him in a Siberian lab. Hydra, led by the stoic Vasily Karpov (Gene Farber), influences Barnes’s actions using posthypnotically suggestive catchphrases.

Karpov’s book of mind-controlling code words is stolen later in “Civil War” by the fellow Hydra agent Helmut Zemo (Daniel Brühl). Zemo uses Karpov’s book to make Barnes fight Rogers and the other members of the Avengers, including Wilson.

Sam Wilson and the Search for the Winter Soldier

Barnes and Wilson’s relationship has been uneasy in the M.C.U. movies. Wilson is introduced in “The Winter Soldier,” the film in which we learn that Barnes survived World War II and is now a Hydra agent. The pivotal moment comes when Rogers is attacked by the Winter Soldier, whom he recognizes as Barnes, his old friend and partner.

Rogers and Wilson meet at the start of the movie, while jogging in Washington D.C., and then bond later at a local Veterans Association facility, where Wilson gives advice and leads group therapy for vets with post-traumatic stress. Wilson tells Rogers that he lost his partner Riley (Ron Underdahl) during a nighttime rescue mission in Afghanistan. He then joins Rogers in tracking and confronting Barnes in both “The Winter Soldier” and “Civil War.” Wilson also joins the Avengers some time between “The Winter Soldier” and the next Avengers film, “Age of Ultron.”

Barnes’s capture and detainment is on everybody’s mind in “Civil War” because, at the start of that movie, Zemo frames Barnes for the bombing of a United Nations building in Vienna. The explosion interrupts the signing of the Sokovia Accords, a divisive peace treaty that would place the Avengers under the supervision of the United Nations.

The agreement is named after the (fictional) Eastern European country of Sokovia, whose capital city, Novi Grad, was destroyed in “Age of Ultron” during the Avengers’ fight with the megalomaniacal robot Ultron (James Spader).

The Vienna bombing also results in the death of 12 people, including the benevolent King T’Chaka (John Kani) of Wakanda. T’Chaka’s son T’Challa (Chadwick Boseman) stalks Barnes throughout “Civil War” but ultimately backs off. Stark doesn’t follow T’Challa’s example, though, and tries to avenge the death of his parents. He does not succeed: Barnes and Rogers thwart him, but not before Stark uses Rogers’s indestructible shield to destroy Barnes’s robotic arm. Barnes then volunteers to refreeze his body, which puts him in a coma-like sleep, until he’s sure that he can fully control his actions.

Barnes mysteriously resurfaces in Wakanda at the end of “Black Panther” during the second of two mid-credits scenes. It’s unclear how or why he is revived there, but the Wakandans seem to have plans for him. In “Black Panther,” T’Challa’s teenage sister Shuri (Letitia Wright) tells Barnes that there is “much more for you to learn.” T’Challa also calls Barnes the “white wolf” partway through “Endgame,” a vague reference to an unrelated character named Hunter the White Wolf, who was first introduced to comics readers in Black Panther No. 4. In that comic, a white boy named Hunter is adopted by T’Chaka after his parents are killed in a plane crash near Wakanda.

A group of Wakandan children also call Barnes a “white wolf” in “Black Panther,” but beyond that, he doesn’t seem to have any ties to Wakanda. He does, however, reunite with Rogers there, where they join T’Challa and the other Avengers in fighting the alien megalomaniac Thanos (Josh Brolin) in “Endgame.”

The Rebirth of Captain America

Thanos kills Barnes, Wilson and billions of other humans at the end of “Infinity War,” using the six reality-altering Infinity Gems to halve the world’s population. But in “Endgame,” the remaining Avengers travel back in time to steal Thanos’s jewels, in that way retroactively pre-empting the “Infinity War” slaughter.

Barnes and Wilson come back the end of “Endgame” and are reunited with Rogers, who seems to have aged rapidly since the last time they saw him. Rogers doesn’t explain how he traveled back in time, but he does tell Wilson that he retired sometime after he put all of the Infinity Gems back where Thanos found them. In a flashback at the end of “Endgame,” we see a younger version of Rogers, dancing with an unidentified woman. Wilson asks who Rogers’s date is, but he won’t say.

Later we learn that she is the former S.H.I.E.L.D. director Peggy Carter (Hayley Atwell), the title character in the Marvel TV spy thriller “Agent Carter.” Rogers had previously reunited with an elderly Carter in “The Winter Soldier.” She eventually dies in that movie but only after telling Rogers that she feels sorry for him: “I have lived a life; my only regret is that you didn’t get to live yours.” Whatever Rogers did with the Infinity Gems seems to have allowed him to travel back in time and reunite with Carter.

Early ads for “The Falcon and the Winter Soldier” feature Peggy’s great-niece Sharon (Emily VanCamp), who helped Rogers and Wilson find Barnes in “Civil War.” Sharon Carter has not, however, appeared in any other M.C.U. movies or TV shows since.