Home » Entertainment » The Campaign to Troll Dr. Oz for Living in New Jersey The Campaign to Troll Dr. Oz for Living in New Jersey

John Fetterman’s race for Senate in Pennsylvania has employed an unusual campaign strategy.

Send any friend a story

As a subscriber, you have 10 gift articles to give each month. Anyone can read what you share. 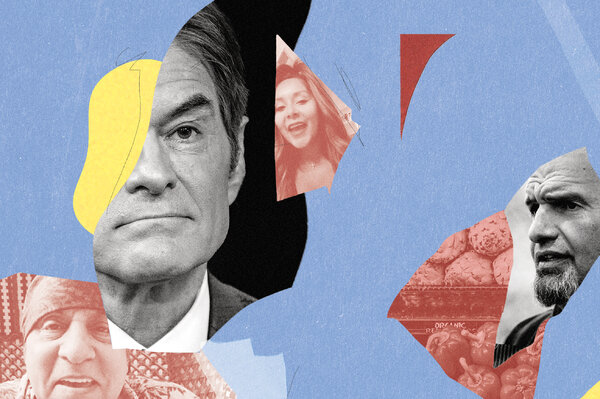 John Fetterman, the cartoonishly imposing progressive lieutenant governor of Pennsylvania who is running for a Senate seat, hasn’t spent much time campaigning since having a stroke in May. It’s an easy thing to forget. Fetterman, a Democrat, only recently resumed public appearances. Before that, though, he managed to keep attention on the Republican contender — Dr. Mehmet Oz, the celebrity cardiothoracic surgeon once championed by Oprah Winfrey and now endorsed by Donald Trump — through probably the most modern means available: trolling. For much of the summer, Fetterman’s campaign sustained a viral media narrative that depicted Oz not just as a wealthy, out-of-touch celebrity with a tenuous connection to Pennsylvania, but as something that is, both regionally and nationwide, way more loathed: a guy from New Jersey.

Oz was born in Ohio and raised in Delaware and has lived in New Jersey for decades. In February 2020, an article in People magazine led readers into the Mediterranean-influenced mansion that he and his wife “built from scratch 20 years ago” in Cliffside Park, right across the Hudson River from Manhattan, where Oz works. It was a flattering story that would soon enough backfire. Later in 2020, Oz formally adopted a Pennsylvania address — but early this summer, when he released a campaign video, the home he was speaking from looked a lot like the one he’d invited a magazine to photograph. Fetterman tweeted a tip: “Don’t film an ad for your Pennsylvania Senate campaign from your mansion in New Jersey.”

From there, Fetterman escalated. He paid for a plane to fly over the New Jersey coastline, trailing a banner that read, “HEY DR. OZ. WELCOME HOME TO N.J.! ♥ JOHN.” (Funnily, this seemed to be targeting vacationing Pennsylvanians.) He used Cameo, the service where you can shell out some cash to have a lower-tier celebrity wish your friend a happy birthday, to hire Nicole Polizzi, better known as Snooki from MTV’s “Jersey Shore,” to goad Oz some more: “I heard that you moved from New Jersey to Pennsylvania to look for a new job,” she told the camera. (Fetterman’s campaign would go on to release a similar video with Steven Van Zandt, known both for playing guitar in Bruce Springsteen’s E Street Band and for playing Silvio Dante on “The Sopranos.”) When Oz visited Geno’s Steaks in South Philadelphia, Fetterman proclaimed it “a rite of passage for every tourist.” Taking things to an intensely local level, he even joked about Oz not pumping his own gas. (New Jersey law requires stations to do it for you.)

Oz has not always helped his case. A video he filmed at a grocery store, trying to underline the effect of inflation, resurfaced recently: In it, he mispronounces the name of the regional chain before wandering the produce section without a basket, awkwardly piling his arms with ingredients for a crudité platter. The online ridicule this received led to a fund-raising windfall for Fetterman — and a surprisingly venomous attack from the Oz campaign, which said that if Fetterman had “ever eaten a vegetable in his life, then maybe he wouldn’t have had a major stroke.”

Questions about politicians’ authentic relationships to their constituencies are not rare, and the news media has been particularly attentive to them during the current midterm elections. CNN wondered if “charges of carpetbagging still matter,” especially for “a hyperpartisan electorate where party identification is the most important factor in the minds of voters”; a New York magazine column declared 2022 “the year of the political carpetbagger.” The year’s debates have mainly focused on candidates returning to homes that some see them as having abandoned. Ryan Zinke, who served as a Montana congressman until Trump tapped him to be the interior secretary, is seeking one of the state’s two House seats as accusations swirl that his primary residence might be in California. The globe-trotting Times columnist Nicholas Kristof was prevented from running for governor of Oregon because he did not meet a three-year residency requirement. Kelly Tshibaka, a Trump-backed Republican running against the center-right Lisa Murkowski in Alaska’s Senate race, was denied a sport-fishing license because she has not resided in the state for at least year. Nobody in Georgia seems especially bothered that the Republican Senate candidate, Herschel Walker, who grew up in the state and played college football there, has spent most of his adulthood in Texas.

The reflexive attitude of New Jersey residents is a kind of friendly middle finger: Feel free to not like it here, but you’ll always be welcome.

Charges that a candidate is “not really from here” typically carry an undertow of class or ideology or, in darker moments, ethnicity. Fetterman’s, of course, is not remotely the xenophobic attack you might imagine a Muslim candidate like Oz facing. (Though an Armenian lobbying group has targeted Oz’s Turkish background and dual citizenship.) Neither is it primarily ideological. And while there is an implied class element — the celebrity doctor, looking down on Manhattan from an estate atop a literal cliff — this has not been the most palpable aspect of the snipe. Fetterman’s insults are laced with a specific regional animus that’s hard to imagine working the same way anywhere else. (Not even when Scott Brown, the former Massachusetts senator, ran for a Senate seat in bordering New Hampshire in 2014.) It is, specifically, the idea that Oz is from New Jersey — a place that the rest of the country finds annoying and distasteful, and whose neighbors find it especially so — that resonates above all else.

This mockery works, in part, because New Jersey itself accepts and revels in the region’s, and the nation’s, collective disdain. Many natives, myself included, know that there is no way to stave off the stereotypes, no matter how unfair or exaggerated they may be. The beaches are beautiful, sure, but they are usually crowded, sometimes rowdy and can even feature Chris Christie haranguing a constituent while brandishing an ice cream cone. Outsiders tend to see an obnoxious land of corrupt lawmakers, oil refineries and expensive tolls, the area you pass through on your way from Philadelphia to New York City. The state is less second rate than it is second place, constantly defined by what it is not (i.e., New York City) rather than what it actually is. New Jersey even struggles to lay claim to things that are genuinely its own: Ask somebody where the Giants and the Jets play football. Eric Adams, campaigning for mayor of New York City, nearly fell victim to this perceived uncoolness, accused of living primarily in a co-op across the Hudson in Fort Lee. The reflexive attitude of New Jersey residents, then, is a defensive posturing, a kind of friendly middle finger, a brash self-regard: Feel free to not like it here, but you’ll always be welcome. And anybody from the Garden State who pretends to be untouched by all this will ultimately face the same treatment Oz has received: There’s no use pretending. You’re just like the rest of us.

New Jersey, in other words, is willing to go along with it. It’s not just Snooki or Little Steven. Bill Pascrell Jr., a Democratic congressman from New Jersey, tweeted that he would nominate Oz for the New Jersey Hall of Fame, where the doctor could join such luminaries as “Albert Einstein, Danny DeVito, Vince Lombardi, Meryl Streep, Bruce Springsteen and Yogi Berra.” What other state’s residents would so happily leverage how little their neighbors think of them? “There’s two types of people,” Anthony Bourdain once said. “People who come from New Jersey and admit it, and people who come from New Jersey and are lying.”

Eamonn Holmes blasts energy companies What are we getting?