Home » Entertainment » Teyonah Parris Didn’t Get ‘WandaVision’ at First, Either Teyonah Parris Didn’t Get ‘WandaVision’ at First, Either

If you initially had a hard time wrapping your mind around “WandaVision” and its post-“Avengers” portrait of grief, which masquerades as homages to classic sitcoms, you’re not alone. Teyonah Parris, one of the breakout stars of the Marvel series, had a hard time getting a handle on it, too.

In fact, she was baffled from Day 1. In the run-up to her 2019 audition, she was given a series of lines to read but was provided zero context about the character or the story line.

“I found out I got the part,” Parris said, recalling her initial excitement about entering the Marvel fold. “What part? No clue.”

Delivered in weekly installments on Disney+, the show — which wraps up its first season on Friday — slowly unravels a mystery revolving around the witchy Wanda Maximoff (played by Elizabeth Olsen) and the android Vision (Paul Bettany), a superhero couple that met a tragic end in the penultimate Avengers film. Now reunited, the pair acts out a kind of demented domestic bliss in the style of various TV comedies — from black-and-white high jinks reminiscent of “Bewitched” to fourth wall-breaking contemporary fare like “Modern Family.”

Through all of the show’s channel changes, so to speak, it becomes increasingly clear that the idyllic suburban New Jersey setting, its residents and Parris’s character, Geraldine, are all under a spell concocted by Wanda’s grieving mind. In the world outside this figment, Geraldine is actually Monica Rambeau, an intelligence agent determined to snap Wanda back into reality. 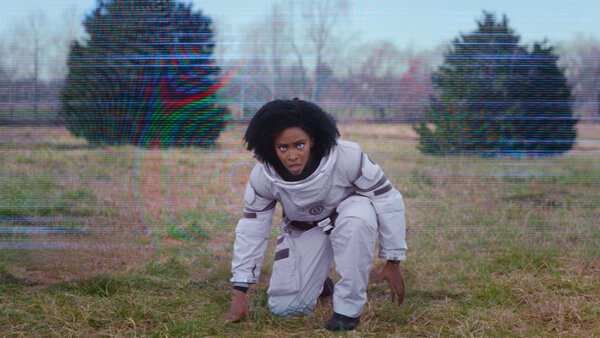 Along the way, Monica’s to-do list includes: processing the fact that she and half the Earth’s population have been missing for five years; coping with the news that her mother died within that window of time; traversing a DNA-altering supernatural force field; and fending off a second, even more menacing witch.

Parris, 33, was on set in Atlanta, taking a break from filming the forthcoming Netflix feature “They Cloned Tyrone.” During a video call last month, she tried to recount the details of her Marvel initiation but had a few stops and starts as she tried to align her thoughts. Her trick, as she explained it, was to speak very slowly so as not to accidentally let slip any secrets of the Marvel Cinematic Universe, as other actors have been known to do in interviews.

She did, however, cop to no small amount of paranoia (for two months, she worried her casting may have been a joke because no announcements were made) and plenty of joyful tears (she broke down when she first saw her face enlarged on a poster in a Disney studio).

“It’s been a dream of mine to be a Marvel superhero,” she said. “I had actually been fan-cast as Monica Rambeau years prior on Twitter, so I started doing my own research on the character then.”

Those who have been keeping tabs on the M.C.U. will recognize the character Monica Rambeau from the 2019 film “Captain Marvel,” in which Akira Akbar played the young Monica, the precocious daughter of the title hero’s best friend, Maria Rambeau (played by Lashana Lynch). Parris will carry her adult depiction into the movie’s sequel, due in November 2022.

A South Carolina native, Parris attended the Governor’s School for the Arts and Humanities there and then went on to Juilliard, nudged along by parents who supported her desire to act. She credits her mother and father with instilling in her “a naïveté — an openness and a belief that anything is possible.”

“I have navigated through life with that in my heart,” she said.

Her first big role was the calculating social climber Coco Conners in Justin Simien’s 2014 film “Dear White People.” Having seen that performance, Spike Lee pursued her for the lead role in his 2015 “Lysistrata” adaptation, “Chi-Raq.” Her television résumé includes roles on “Survivor’s Remorse” and “Empire.” She also had a recurring role on the AMC drama “Mad Men” — that’s where she first worked with the “WandaVision” director, Matt Shakman.

“What I saw back then was what I saw every day filming ‘WandaVision,’” Shakman said, referring to Parris’s arc in the fifth season of “Mad Men.” “Teyonah brilliantly combines precision and planning with total instinct in the moment. She’s equally masterful in comedy or drama, from quiet moments to big physical performances.”

She brought poise, a quick wit and a sense of inner strength to those earlier roles. As Dawn Chambers, the proud secretary to Don Draper (Jon Hamm), she blazed a trail as the first Black employee in the “Mad Men” ad agency Sterling Draper Cooper Pryce. In “Survivor’s Remorse,” she starred as the brainy (and bougie) Missy Vaughn, an outspoken sports agent’s wife.

She brings a similar grit and grace to Monica, even while being flung through the air by mystical forces or delivering Wanda’s miraculous twin babies on the floor of a living room modeled after “The Brady Bunch.”

“We had so many boxes to check for this role,” said Jac Schaeffer, the “WandaVision” creator. “We needed an actor who could simultaneously embody the optimism and vitality of young Monica while also conveying the deep sadness of a grown woman mourning the loss of her mother — then on top of that, convincingly joining the ensemble of a classic sitcom.”

“She hit all the dramatic notes of a woman dropped into her worst nightmare,” she added. “But then with a flash of that smile, we can see the mischievous little girl underneath.”

In comparing herself to Monica, Parris said she shares the character’s ambition and bold, unapologetic nature.

“Her curiosity, though?” she said. “You know the moment where she sees the energy field and decides to touch it, as opposed to backing up? I don’t know that I share that much curiosity with her.”

Despite her initial confusion about “WandaVision,” Parris was drawn to Monica’s depth, she said, and to the fact that this secondary character is presented as “a full-fledged, nuanced human being.”

“She is there, by nature, serving this larger story of Wanda and Vision,” she said. “But they have done, in my opinion, a great job of making sure that she is her own person with her own struggles and her own desires.”

Parris boned up on Monica’s back story by reading comic books in which the character had major story arcs. She already had a handle on the retro TV references, having grown up watching reruns on Nick at Nite. Likewise, she had already seen most of the Marvel films.

“I’m the person who shows up because I want to see things flying, breaking and glowing,” she said about going to the movies.

Now she’s the one doing the flying. After the revelatory seventh episode aired, showcasing Monica’s newfound powers, fans flocked to Twitter to praise her first official superhero landing — a single mighty fist planted firmly on the ground, eyes forward and fierce. She became giddy just thinking about filming that scene.

“I was so excited I think I overdid it — I’m still feeling some wonkiness in my hip from doing that stunt,” she said. “I probably should’ve let the stunt double do more than I let them, but I so wanted to hit that pose.”

Levitation and luminous eyes aside, it’s what Monica Rambeau embodies that most moves the woman who plays her.

“For me, it’s really about that representation that I yearned for when I was younger,” Parris said, referring to the lack of women who looked like her in the sci-fi, fantasy and superhero stories she consumed growing up. “When you look at these characters who make you feel empowered, make you think that you can do things you never imagined, it’s important to see different races and genders reflected in that space.”

She beamed as she remembered seeing a cast full of Black actors play superheroes on the big screen back in 2018.

“For my big, grown self watching ‘Black Panther,’ the level of empowerment and community and excitement that I felt … that we all felt!” she said. “You just felt seen — I’m very honored and excited to continue that.”

Monica already has an official hashtag emoji on Twitter, in all its brown-skinned, natural hair-having glory. When asked if she was prepared to eventually see her likeness replicated as action figures and cosplay get-ups, Parris emphatically clapped between each word of her response: “I am ready!”

“I’m ready to see all the babies dressed up in Monica Rambeau costumes for Halloween,” she said. “My nieces and nephews are already like, ‘When can we buy it?’”

While questions about filming the “Captain Marvel” sequel elicited a flat “no comment,” Parris was a bit more open about her eagerness to work with the film’s director, Nia DaCosta. The two have already worked together on “Candyman,” the much-anticipated slasher film reboot produced and co-written by Jordan Peele, now scheduled for an August release. When the horror film wrapped, she was unaware that they would be teaming up again so soon.

“To be on a project with Nia DaCosta, who’s going to be the first Black female to direct an M.C.U. film. …” Here, she let out an enraptured sigh. “I’m really just in awe that I get to be a part of something like this.”