Stars Bring a Broadway Tune Back to Times Square, Unexpectedly

The first notes of the unexpected chorus sounded just after 3:30 p.m. in Times Square, rising above the noise of passing traffic and halting some passers-by in their tracks.

More than two dozen actors and actresses — including Andrew Rannells, Carolee Carmello, Jason Gotay, Telly Leung, Norm Lewis and Andréa Burns — assembled Wednesday afternoon on the tall red staircase that rises above a theater ticket booth. After a few breaths, they launched into the song “Sunday” from Stephen Sondheim’s musical “Sunday in the Park With George.” 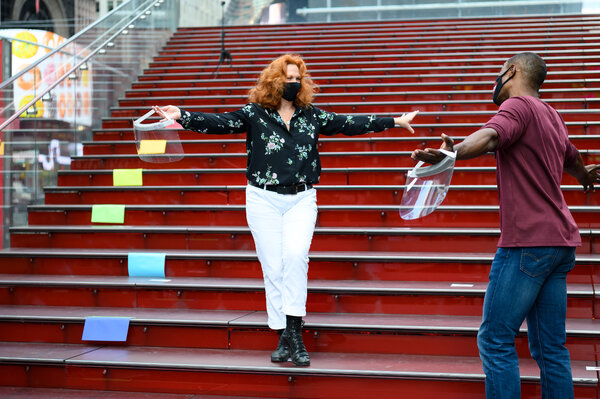 A small crowd gathered nearby to watch, with many people lifting phones to record the singers, who wore clear plastic face shields and were spaced out on the stairs.

The unadvertised event, directed by the Pulitzer- and Tony-Award-winning composer Tom Kitt and the Tony honoree Michael McElroy, was set up by a volunteer organization, NYCNext, which has sought to counter the effects of the coronavirus pandemic by producing what it calls public “moments of joy.” James Sampliner and the Tony and Emmy winner Billy Porter provided the song arrangement, along with McElroy.

Standing among the ensemble on the staircase was Bernadette Peters, who played Dot, one of the main characters in “Sunday in the Park,” which debuted on Broadway in 1984.

Peters said before the performance that she hoped the song “Sunday,” which in the musical helps to create calm during a fractious moment, could do the same in real life.

“We can’t move around, we can’t gather, we can’t go to the theater,” she said. “We need something that can be a healing balm.”

The performance comes at a precarious time for the theater. Broadway and Off Broadway houses have been closed since March, and although a few shows have announced opening dates in March 2021 — a major one, “The Music Man,” is aiming for May — the future is uncertain.

NYCNext was started in August by Andy Lerner, who has led tech start-ups, and Maryam Banikarim and Caroline Donahue, both of whom have worked as marketing executives. It aims to support the city’s cultural community by showcasing performers at a time when venues are closed and providing the participants with stipends.

The effort was born of impatience with the notion that New York City would not be able to recover from the pandemic, said Banikarim, adding: “We believe the best way to revitalize our city is through the arts.”

Its first event took place in Chelsea on Sept. 25 when the Grammy-nominated pianist and composer Elio Villafranca and his band performed on the sidewalk of West 21st Street near Ninth Avenue. On Tuesday a poet named Mahogany Browne recited works in Central Park. Future events are expected to include performances by jazz musicians, comedians and dancers.

To avoid drawing a crowd that might make social distancing difficult, NYCNext does not publicly promote these events.

The fact that performances are not announced adds a serendipitous element of discovery to the moment, Lerner said, adding: “You just stumble into something amazing that only happens in New York.”