Home » Entertainment » Spider-Man Was Everywhere At Disney’s D23 Expo, Despite Leaving The MCU Spider-Man Was Everywhere At Disney’s D23 Expo, Despite Leaving The MCU

“They’re just being two kids fighting over money, when they could just come together and make something great,” one fan told BuzzFeed News of the fight between Disney and Sony. 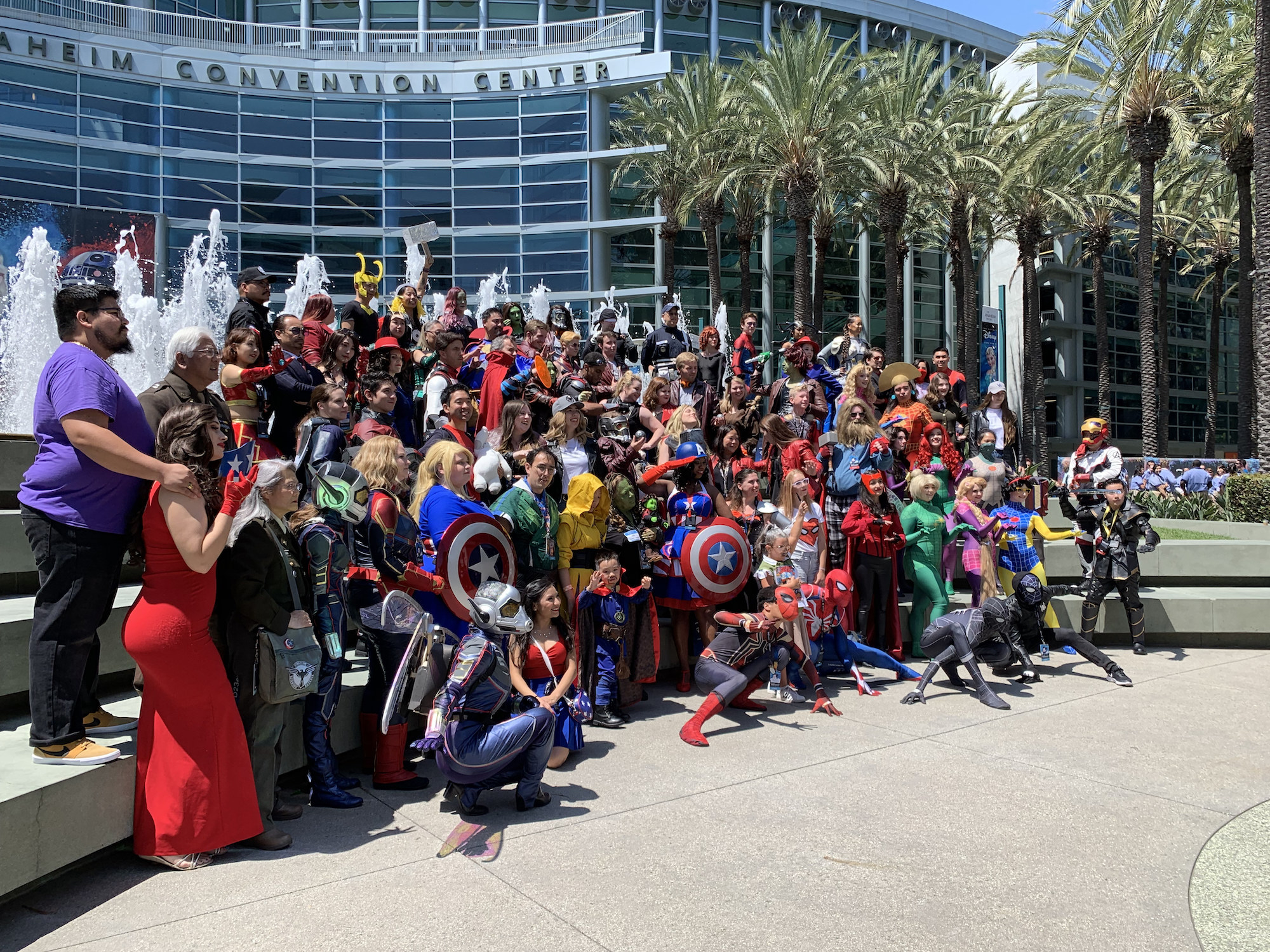 ANAHEIM — When a small army of cosplaying Marvel superheroes gathered in front of the Anaheim Convention Center at Disney’s D23 Expo on Friday afternoon, there were Thors and Iron Men (and Women), Ant-Men and Wasps, Captains Marvel and America, and even a baby Doctor Strange.

The most conspicuous contingent of superheroes, however, were the more than a dozen men and women who had all dressed as Spider-Man.

But as one Spider-Man fan in full costume began posing for photos near the throng of Marvel characters, a passing attendee yelled out, “Spidey, I think you’re at the wrong convention!”

It has indeed been a trying week for Disney’s Spider-Man fans. The wildly popular — and lucrative — character was thrust earlier in the week into the middle of a public corporate fight between Disney, Marvel’s parent company, and Sony Pictures. It’s left Marvel fans in despair that actor Tom Holland’s beloved version of the webslinger will be forced to leave the Marvel Cinematic Universe.

“The news this week has been really tough,” said Erik Nowicki, a 22-year-old from Orlando who made his first trip to Disney’s biannual fan convention in California in full Spidey costume. “All of us fans have loved seeing Spider-Man in the Marvel Cinematic Universe. To have that taken away so soon is just going to be a shame.”

Kelvin Brillante, a 30-year-old in a modern-dress Spidey costume making his second trip to D23, echoed that sentiment. “I was quite upset,” he said. “I’m going to miss him a lot in the MCU.” 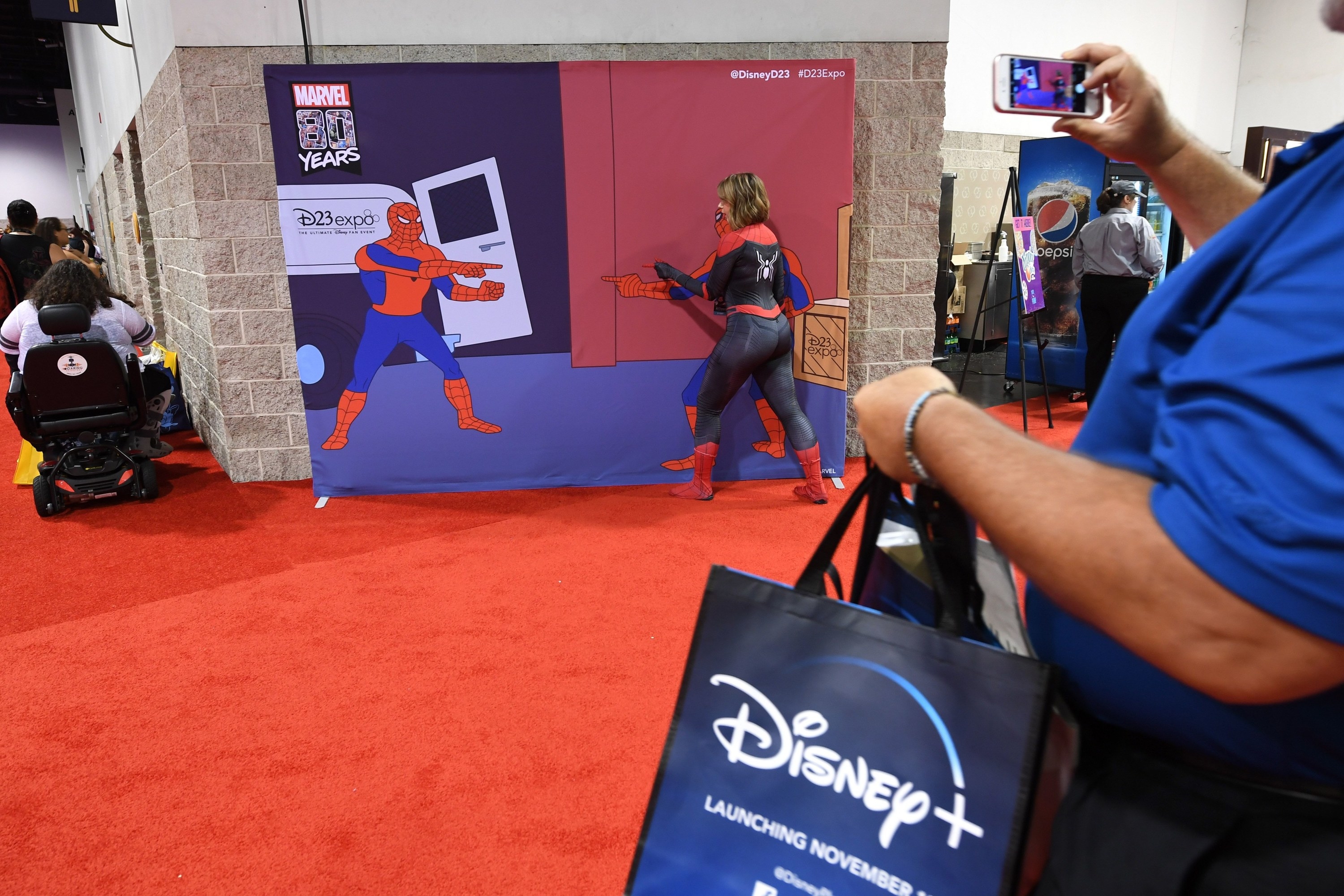 A cosplayer in a Spider-Man costume poses for a photo at the D23 Expo on Saturday.

Nowicki, who bears an uncanny visual and vocal resemblance to Holland, had a regular stream of other D23 attendees approaching him for photos. “I go into the Disney parks all the time with the whole getup,” he said with a smile. (Nowicki works at Disney World’s Animal Kingdom, he said, but not in costume.) For Nowicki, Holland “really represents Spider-Man so perfectly on film,” and the news that Sony Pictures and Marvel Studios would likely no longer share the character in future movies had been “heartbreaking” for him.

The split, however, hasn’t done much of anything to curtail the love for Spider-Man at the convention. There were fans dressed as Spider-Man/Disney princess hybrids, and fans dressed as the versions of Spider-Man from the 2018 animated film Spider-Man: Into the Spider-Verse — which was produced entirely by Sony Pictures with no official involvement from Disney.

“It just doesn’t matter what [studio] it is, you know,” said Alec, a cosplaying fan who declined to share his last name, while perched Spidey-style on top of one of the convention center’s outdoor trash cans. “It’s Marvel, anyway. The other [superheroes] are here — how come I can’t be?” 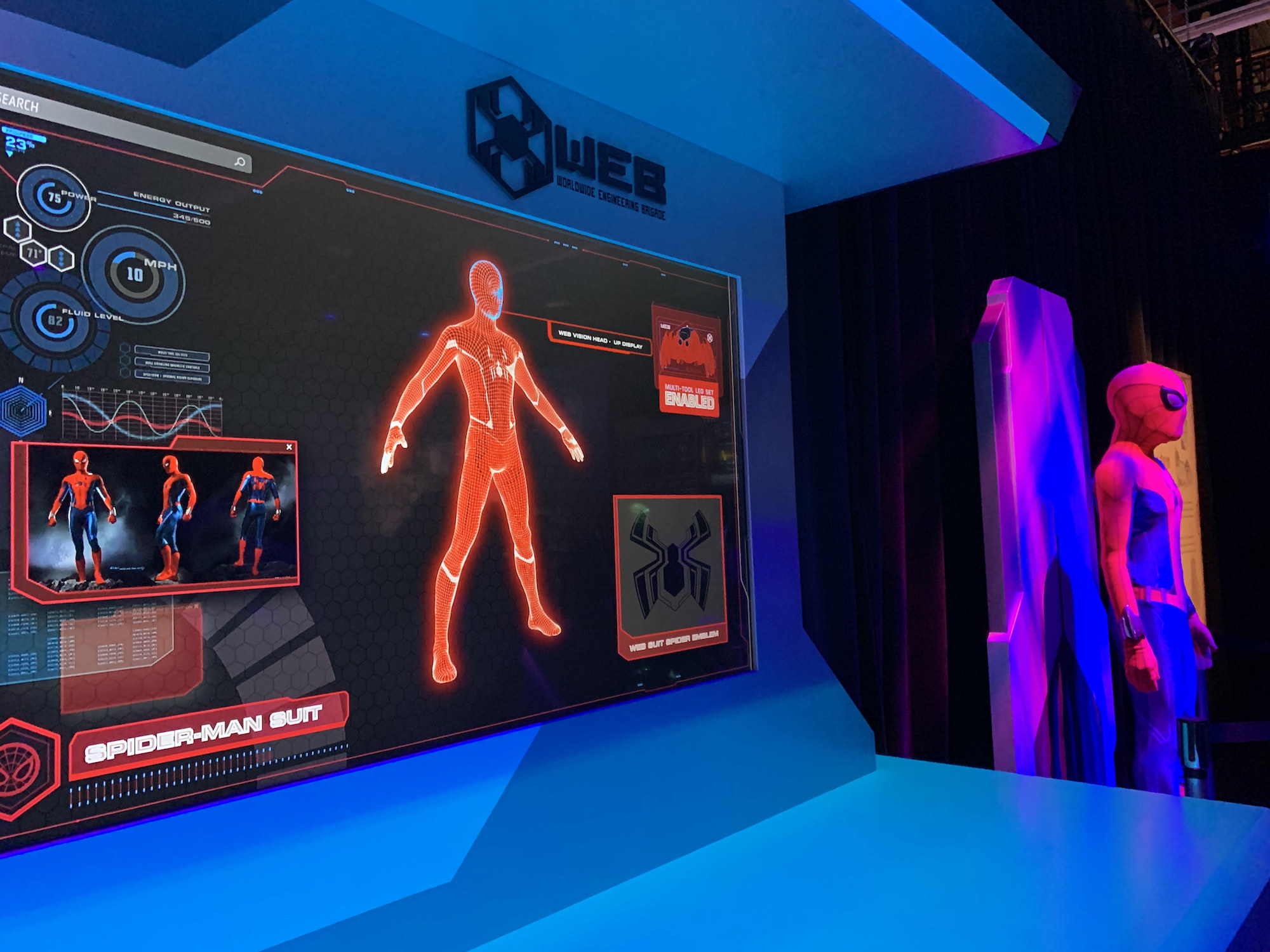 The Spider-Man display at the D23 Expo for the upcoming “Avengers Campus” expansion at Disneyland Paris and Disney’s California Adventure in Anaheim.

That’s exactly the attitude Disney is counting on for its long-term plans for the character. While Sony Pictures retains the movie rights to Spider-Man, Disney’s purchase of Marvel Entertainment in 2009 brought just about every other iteration of the character into the Mickey Mouse family — including rights to merchandising and use in Disney’s theme parks. At D23, the company erected a splashy first look at its planned “Avengers Campus” expansion at Disneyland Paris and Disney’s California Adventure theme park in Anaheim, both of which will include a major area devoted exclusively to Spider-Man — with a Spidey logo notably different from the one Holland sports as Spider-Man.

Nearby that pavilion, Dane Collaro, a 23-year-old Spidey cosplayer, was carrying around a sign declaring “I belong with Marvel, not Sony!!!”

“I’m hoping some high-up Disney suits or Sony suits are walking around today, and seeing everyone’s reaction, taking pictures of me, getting fired up about the situation,” Collaro said.

He then referenced the origin of the dispute between the two companies — that Disney reportedly wants a 50/50 split of the profits from Sony’s future Spider-Man movies — by flipping his sign to show the other side: “Disney, you make enough money, just let me be in the MCU!!!” 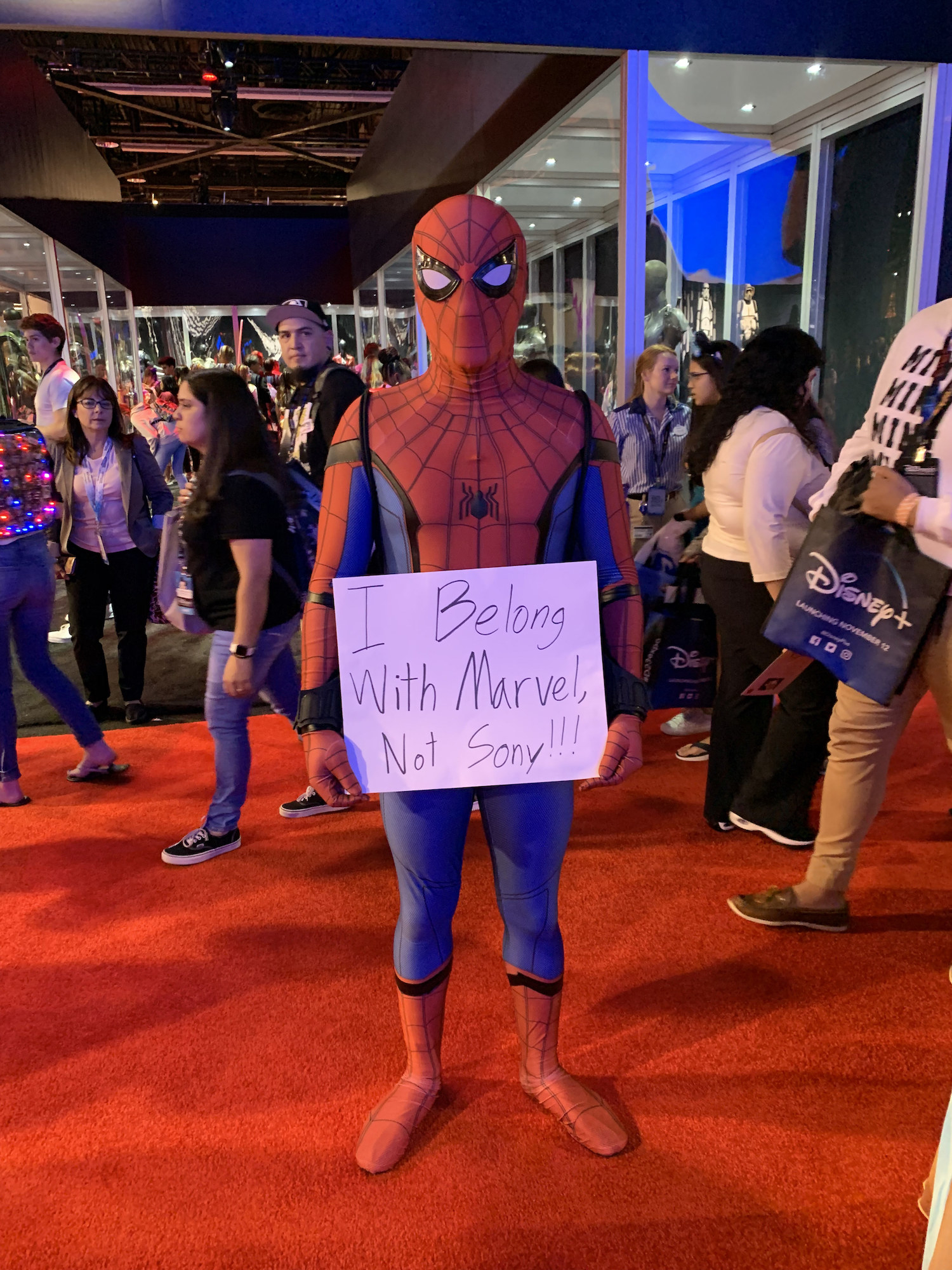 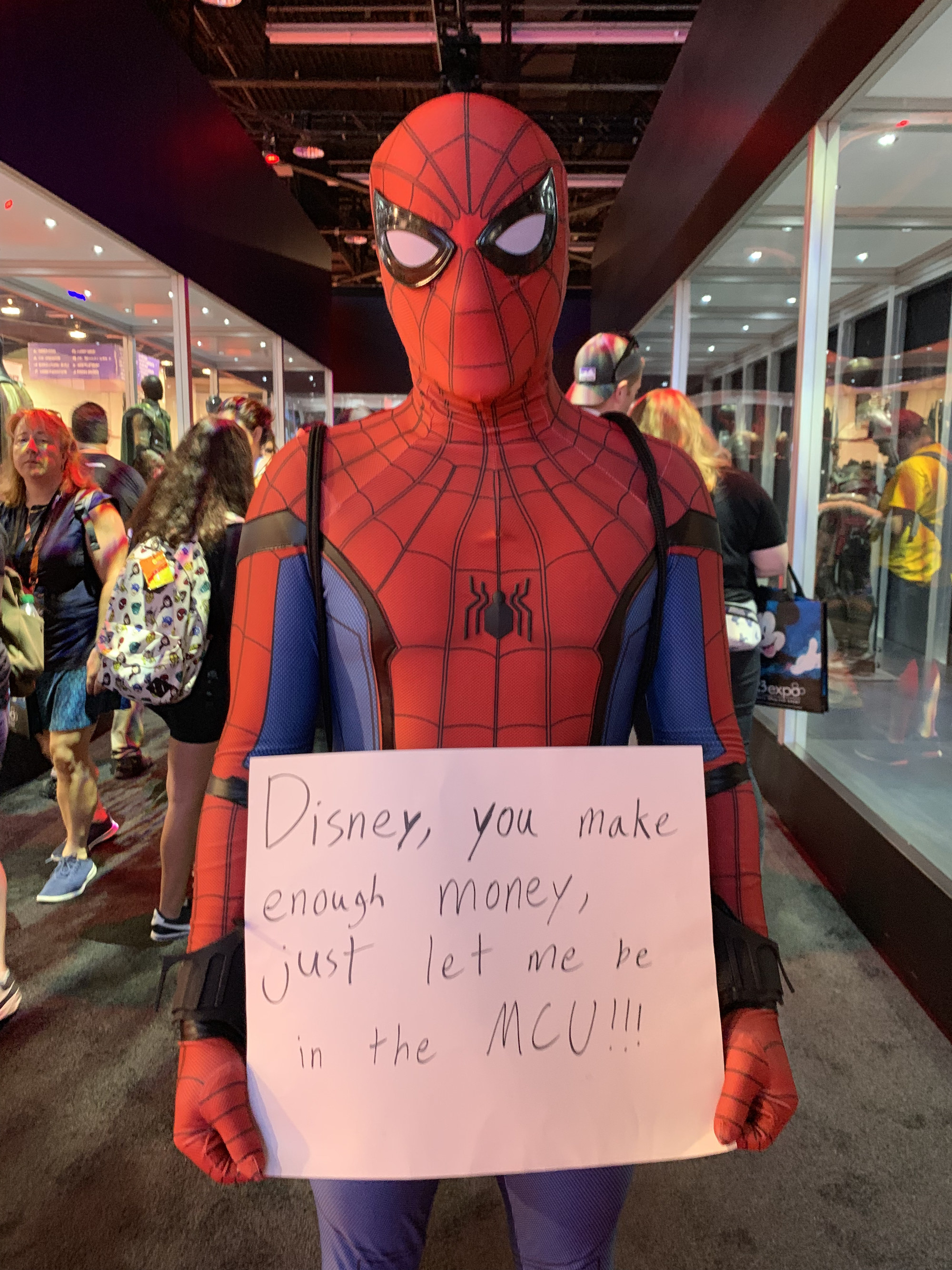 Spider-Man fan Dane Collaro displays his signs protesting Disney and Sony’s fight over the movie rights to the character.

“They’re just being two kids fighting over money, when they could just come together and make something great,” Collaro said.

The fate of Spider-Man within the MCU remains frustratingly unclear. Representatives for Disney and Sony Pictures have remained silent on the issue for now, beyond Sony Pictures’ statement on Tuesday that the company was “disappointed” by Disney’s decision to remove Marvel Studios chief Kevin Feige as one of the lead producers of Sony’s Spider-Man movies.

Holland did speak out — obliquely — on the issue at D23 on Saturday, while appearing during the Walt Disney Studios presentation to promote his work in the upcoming Pixar animated feature Onward.

“Listen, it’s been a crazy week,” he said to the audience, “but I want to you to know that I’m grateful from the bottom of my heart, and I love you 3000.” (That phrase, uttered by Robert Downey Jr.’s Tony Stark and his daughter in Avengers: Endgame, has become a kind of mantra for the film’s cast as they thank fans for the film’s success.)

Every Spider-Man fan who spoke with BuzzFeed News, meanwhile, expressed at least some optimism that Disney and Sony may still come to a resolution that will allow the character to remain in the MCU.

“I’m just sure it’s not over,” said Alec. “It’s not finalized. They’re going to come to some decision. I’m sure it’ll be the same by the end.”

“I think if anyone’s going to back down, it’s going to be Marvel,” Collaro said, “because they basically made Spider-Man the next Iron Man, so they can’t let him go now.”

“I do feel the negotiations will be resolved in some form at some point,” Nowicki said, adjusting sunglasses that resembled the ones bestowed to Holland’s Peter Parker by the late Tony Stark in this summer’s Spider-Man: Far From Home. “At least, I really hope they do. Whether it’s going to be that 50/50 split is up in the air, but we’ll have to wait and see just what happens.”

He smiled, then held his stomach. “Hopefully within these next couple weeks, because I don’t want to feel like this for too much longer. ‘I don’t feel so good, Mr. Stark!’”