With Jordan Brand’s Holiday 2022 lineup finally rolling out, “Midnight Navy” is among a handful of sneakers slated to release between October and December. The beloved Air Jordan 4‘s familiar colorblocking harkens back to the OG “Fire Red” model, first seen in 1989. The original paneling is updated with speckled details at the midsole and support wings, while the silhouette’s signature mesh netting is offset with navy blue eyelets. The roundup below positions the upcoming release amongst iconic entries in the franchise, including celebratory executions, like “Bred,” which highlights Michael Jordan’s victory during the 1996 NBA Finals against the Seattle SuperSonics. Others, like the 2019 release of “Sail,” showcase the sneaker’s crossover appeal and work with late designer Virgil Abloh. Check out each model on GOAT and stay tuned for the “Midnight Navy” drop. 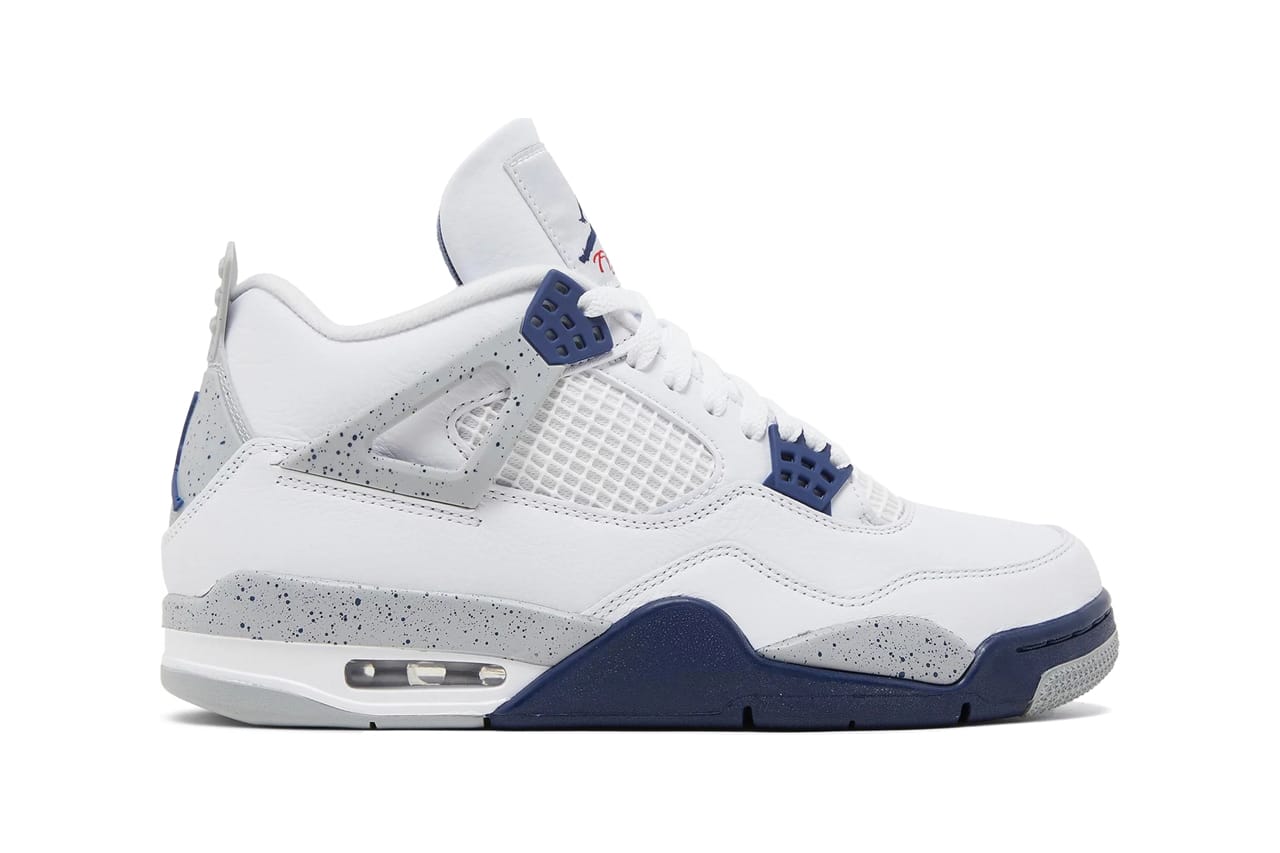 Released last week, “Midnight Navy” revisits the classic colorblocking of “Fire Red” with speckled support wings inspired by “White Cement.” White leather uppers dominate the style while hits of navy blue land on the cages and midsole. White netting adorns the throat and quarter panels. Solid gray components and an exposed Air unit round out the heel. A blue Jumpman motif is stamped on the heel tag, and embroidered “Air Jordan” and “Flight” tags accent the top and back of the tongue. 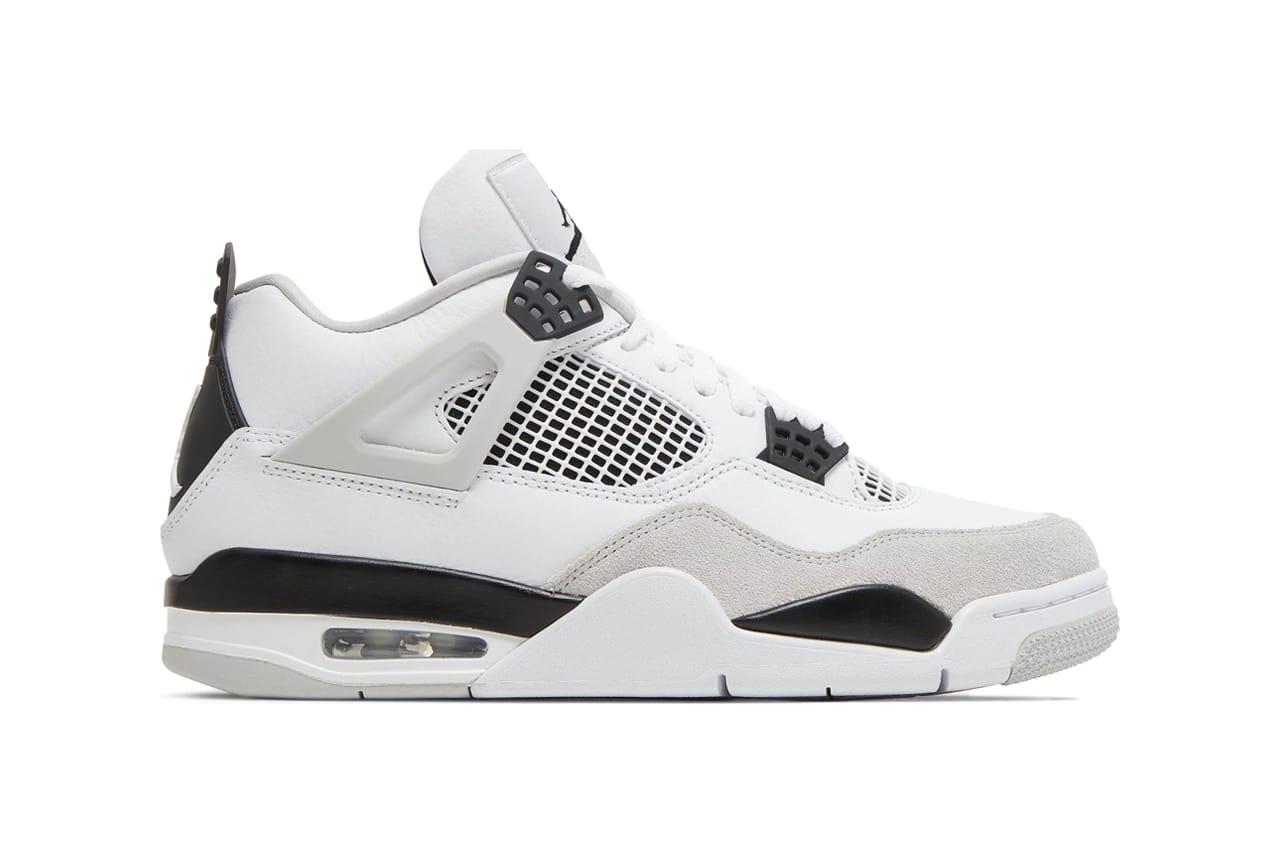 Released on May 21, 2022, “Military Black” is a simple and monochromatic execution of the famed silhouette. The colorway predominantly features touches of black and light gray suede paneling. The model’s signature netting hugs the throat and midfoot with contrasting eyelets in black. The support wings, studded toe caps and sole are dressed in a muted gray. The oversize tongue is adorned with a Jumpman patch, and an embossed motif is parked back against the heel. 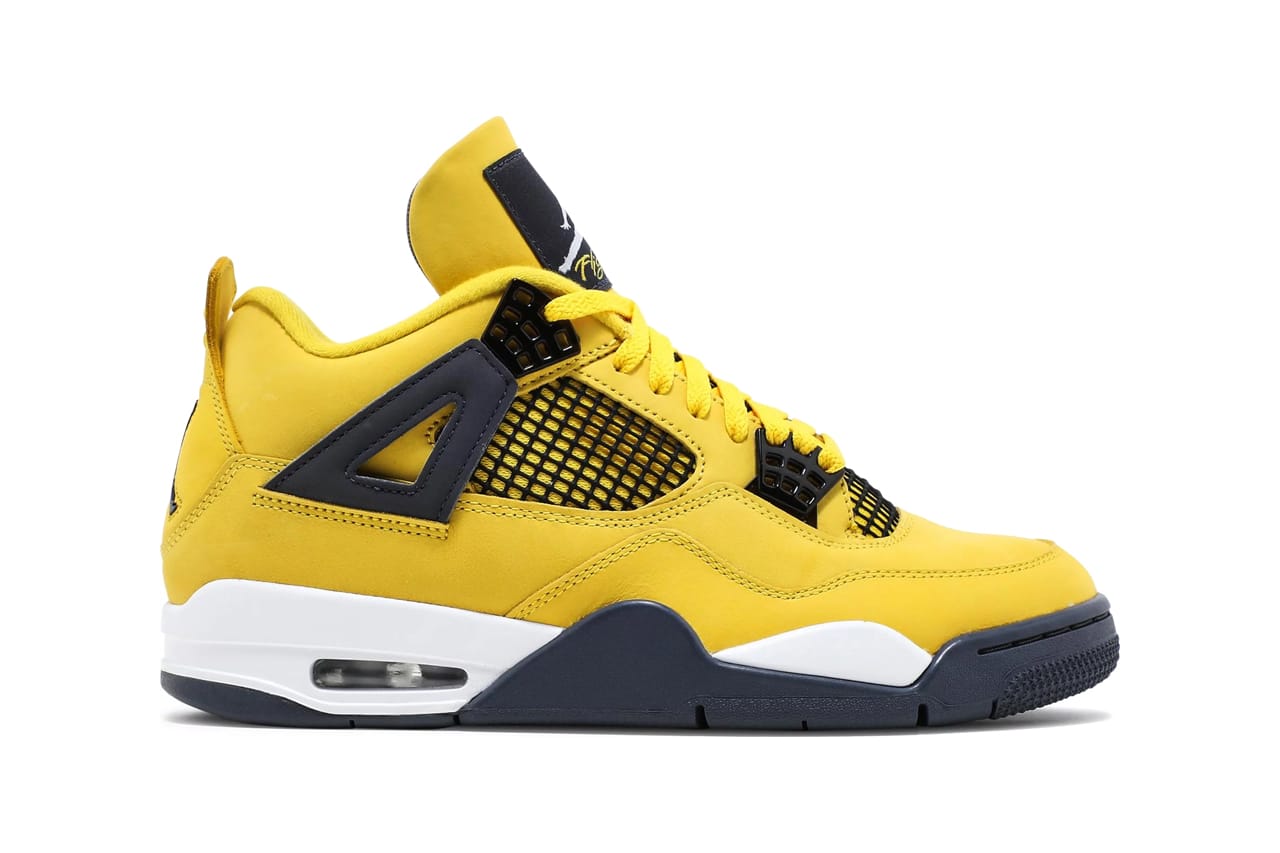 At the time of its 2006 release, the vibrant colorway, “Lightning,” was exclusively sold as an online release housing a T-shirt. The model made an anticipated comeback in August 2021. The nubuck uppers are famously clad in bright “Tour Yellow” hues. Grayscale accents adorn the nubuck upper, starting with jet black hardware near the lacing system and netting along the medial panel. At the midsole, white and tonal gray accents build out the stacked sole, giving a peak of the Air unit underfoot. The color story continues with hints of black at the heel and tongue. 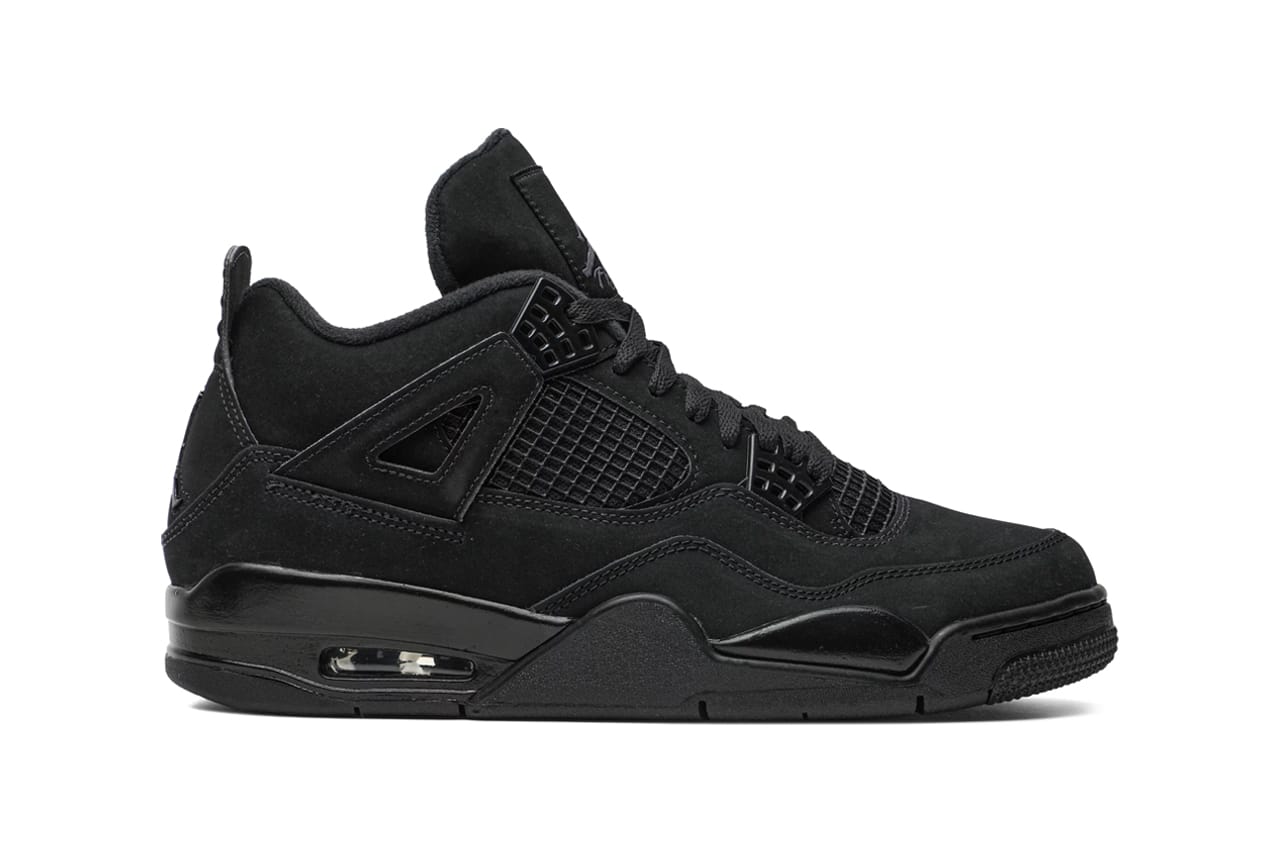 “Black Cat” shows love to Michael Jordan by embodying the star’s nickname. Stealthy, blacked-out paneling pays homage to the athlete’s formidable presence on the court. The reworked iteration adds a sense of depth through the shoe’s matte finish and contrasting high-gloss hardware, mesh overlays and webbed eyelets, which dominate the quarter panel and midfoot. A “Flight” patch sits atop the tongue while the heel tag is decorated with an oversize Jumpman motif. “Black Cat” originally released in 2006, later dropping again in 2020. 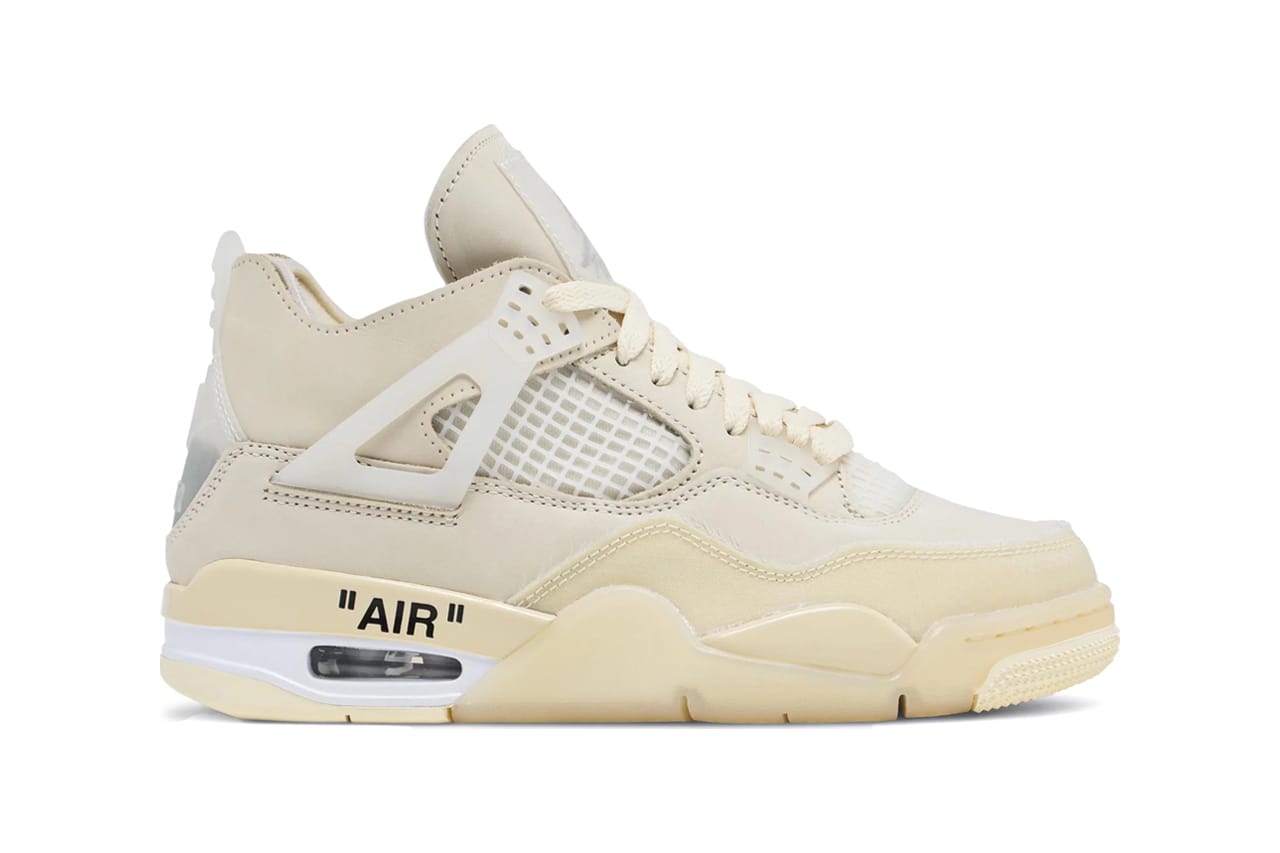 “Sail” marks the third collaborative effort between Jordan Brand and the late Virgil Abloh. The shoe debuted during Off-White’s Fall/Winter runway presentation and MCA exhibition. The model’s creamy, monochrome theme is offset with tonal variations throughout the lacing system. The line’s signature stenciling accents the smooth-grain uppers, along with off-white embellishments that hug portions of the midsole and outsole. A custom maker’s mark inside the netting denotes mutual branding and the model’s manufacturing location. A semi-translucent bubbled tab is melded to the heel. Small embellishments, such as “AIR” lettering stamped above the window unit, complement the model’s soft-washed color story. 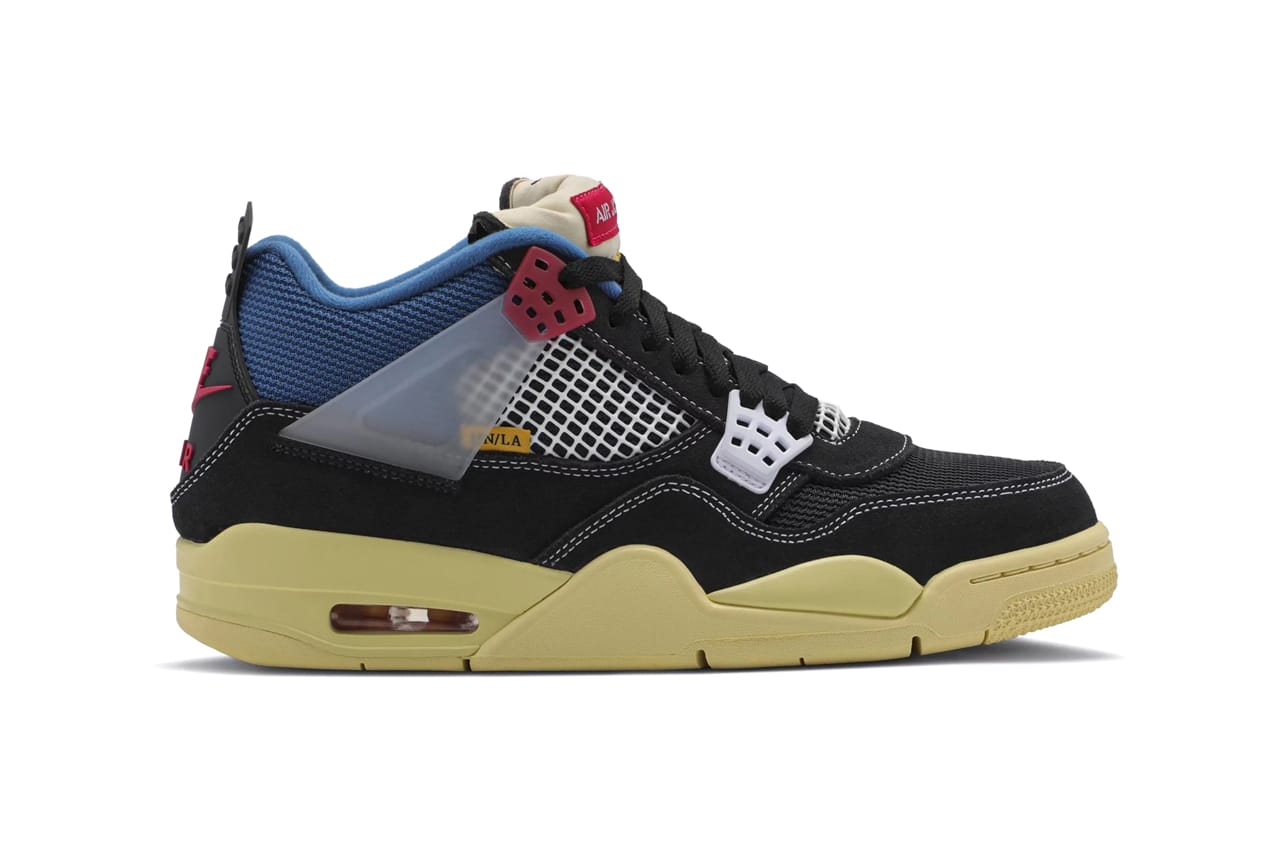 The Union LA x Air Jordan 4 Retro “Off Noir” was quite divisive at the time of release. Founder Chris Gibbs’ creation drew inspiration from childhood pastimes by shortening the height of the model’s larger-than-life tongue, giving it the appearance as though it was tucked down. Further distinguishing the silhouette, “Off Noir” is enveloped in a mash-up of moody accent colors against the black base. Key differences include the translucent support wings and webbed eyelets, both of which starkly pop against the white fish netting near the throat and vamp. Mixed materials, like the woven paneling at the toe cap and collar, break up the shoe’s suede components. In lieu of a colorblocked midsole, the style dons a solid mustard yellow base. “Nike Air” branding hugs the heel with red “Air Jordan” patches on the tongue. 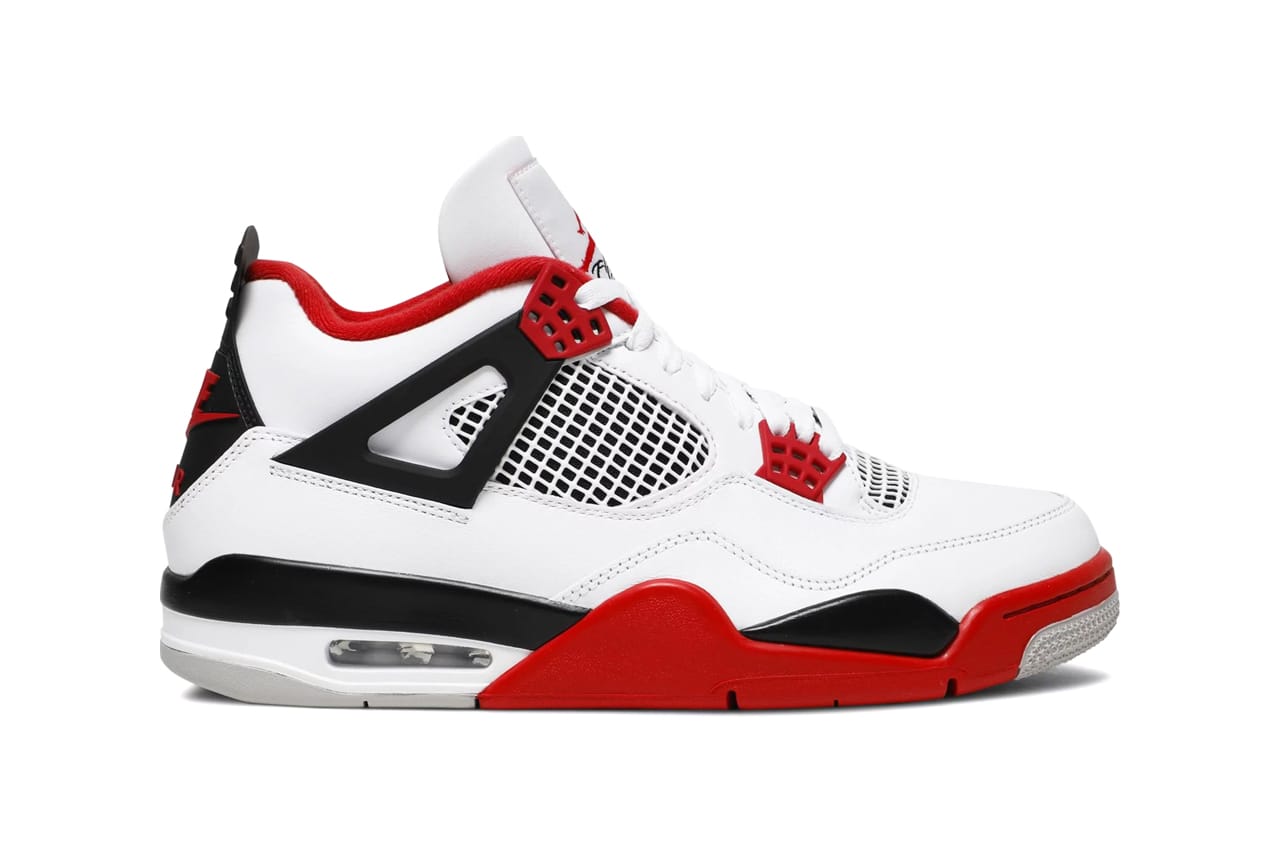 The OG colorway originally debuted in 1989 and was later re-released in 2006 and 2012. This AJ4 is a bright and clean iteration of the iconic model — mostly dominated by hits of red, black, and gray. Faithful to its predecessor, “Fire Red” dons a white leather upper punctuated by red accents at the eyelets and outsole. The outer heel, midsole and support wings are enveloped in inky, black tones contrasting the medial webbing. The visible Air unit is offset by light gray trimming along the outsole. The heel features an oversized “Nike Air” graphic, with “Flight” branding on the tongue. 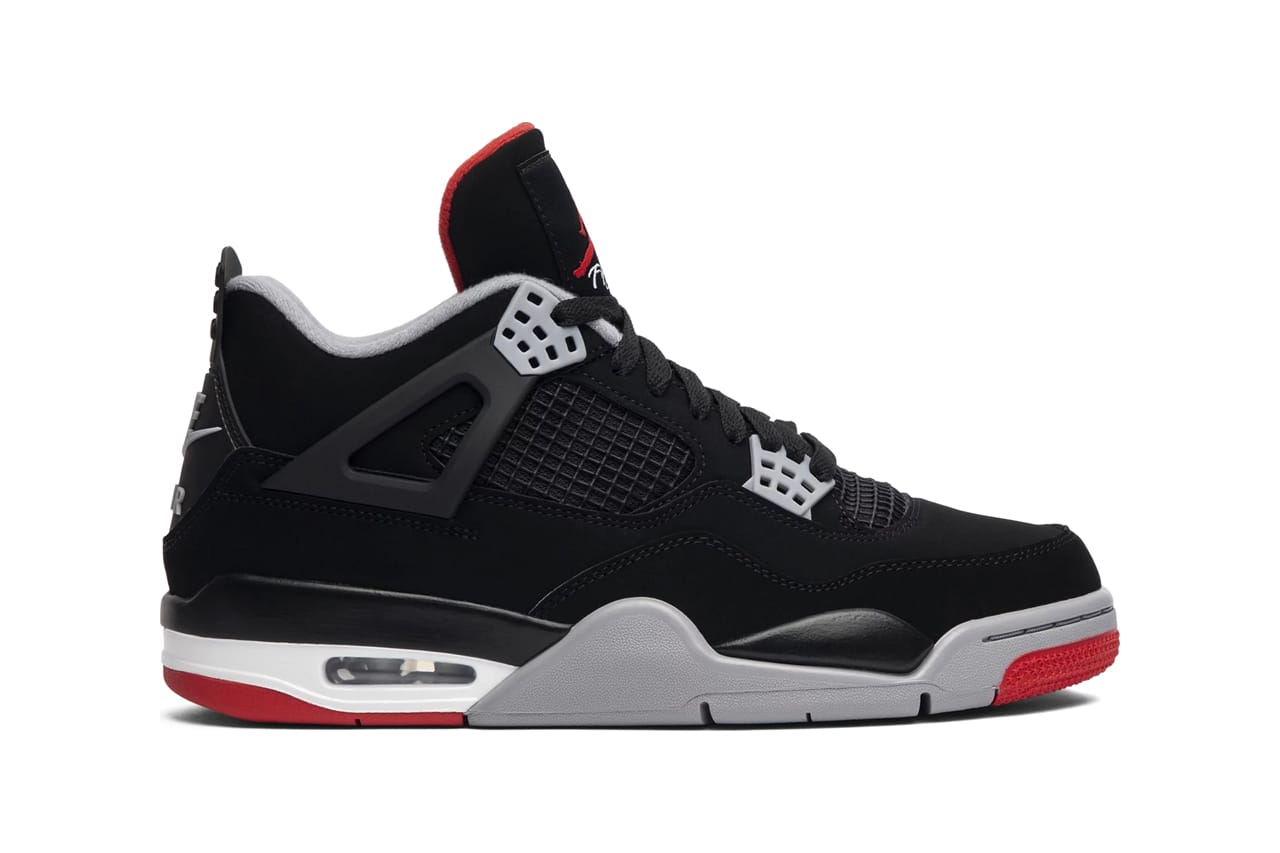 In May 2019, “Bred” re-released, staying true to its 1989 source material. “Nike Air” graphics dominate the heel tab in gray. These tones are incorporated in the piping along the collar, the netted eyelets and stacked outsole contrasting the model’s smokey, black suede paneling. The support wings and mesh overlay complement the monochromatic color story, which continues with colorblocked “Nike Air” and Jumpman branding on the heel and tongue. 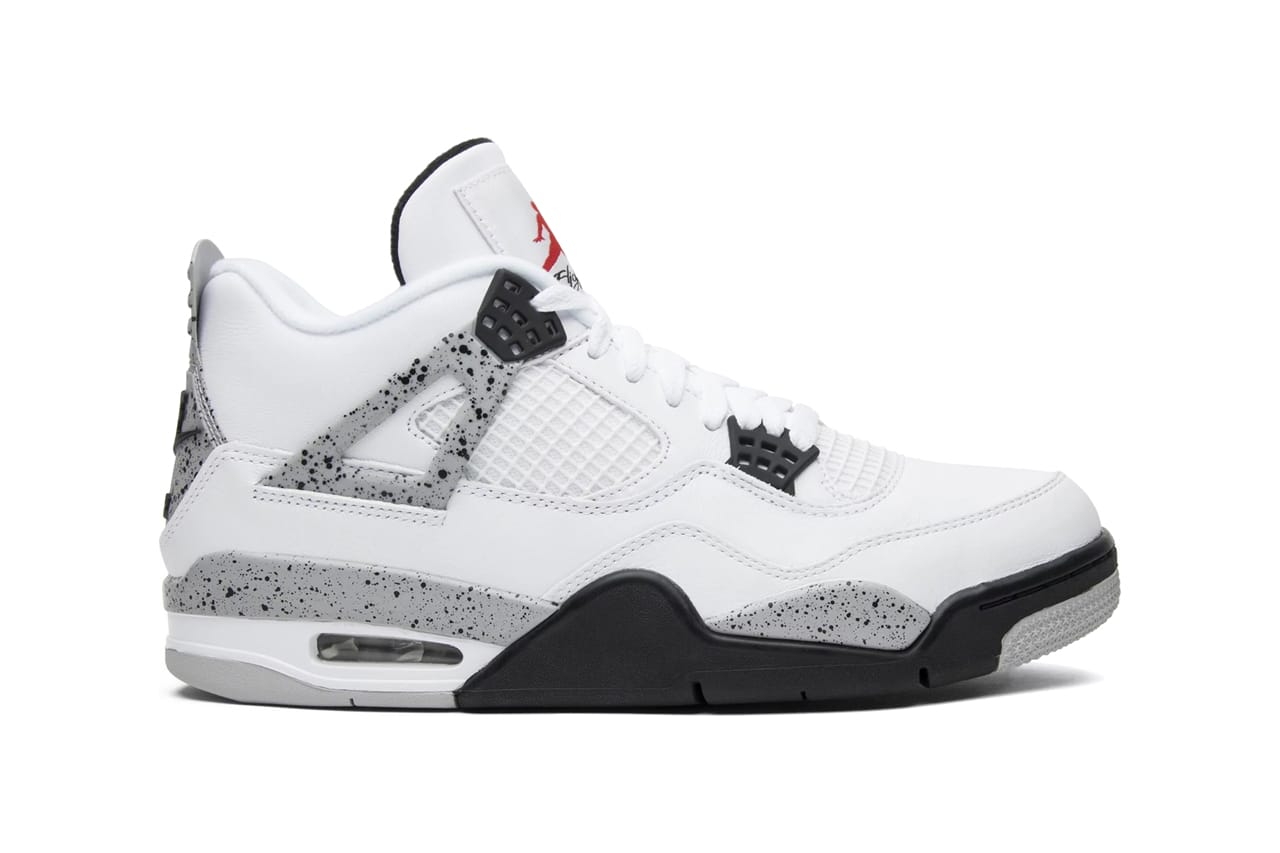 “White Cement” is another iteration from Jordan Brand’s remastered campaign. The original ‘89 silhouette was made famous after appearing in Spike Lee’s Do the Right Thing, later reissued in 1999, 2012 and again in 2016. It’s a simple, cool-toned execution with decorative overlays structured throughout the upper. The tiered midsole sees a mix of textures and finishes, like the matte herringbone insert in black, which is paired alongside solid gray and white components framing the exposed Air unit.
Source: Read Full Article

LOLz! Pete Davidson Is The Favorite As Gamblers Bet On Who Gisele Bündchen Will Date Next!