Home » Entertainment » Review: 4 Characters in Search of a Big Moment in ‘A Day’ Review: 4 Characters in Search of a Big Moment in ‘A Day’

Time flies when you’re having no fun.

Take the four main characters in the English language premiere of Gabrielle Chapdelaine’s “A Day,” produced by the Cherry Artists’ Collective in Ithaca, N.Y. During the 24 hours covered in the play’s 90 minutes — each hour set off like a chapter — they work resentfully, sleep fitfully and, in between, live morosely.

Nico (Sylvie Yntema) fantasizes about friends who don’t really exist. (She does, however, set a dinner place for the cellphone she’s stolen from a colleague’s desk.) Harris (Karl Gregory) parties without pleasure, texts endlessly from the toilet and tells his mother he’s not doing well. At least his mother answers; Alfonso (Jahmar Ortiz) visits his childhood home knowing that his parents moved out of it ages ago — and he’s the optimist in this bunch. Debs (Erica Steinhagen) uses up her stock of bravery just getting dressed; she is “deliberately sad,” as a stage direction notes.

The performances of the four actors, livestreamed from separate green-screen booths on the stage of the State Theater in Ithaca, are mixed in real time with recorded video featuring other members of the collective playing co-workers, friends, baristas and the like. The technology is slick; there’s one director (Wendy Dann) for the very appealing actors and one for the “mise en stream” (Samuel Buggeln). Together they make the day move swiftly, even if you are relieved to find that the hours from 2 p.m. to 4 p.m. have been dropped because it’s nap time.

But the lack of actual interaction and the unrelieved ticktock structure eventually grow monotonous. It doesn’t help that as an illustration of lives lived mostly on phones and relationships conducted mostly on social media, the drama happens mostly in the characters’ fingertips. Often when they do speak, it is not even for themselves. The others speak for them, in a language you might call Smug Snark, as when Nico tells Antonio “you congratulate yourself on the impulse to do a good deed” — instead of actually doing it. 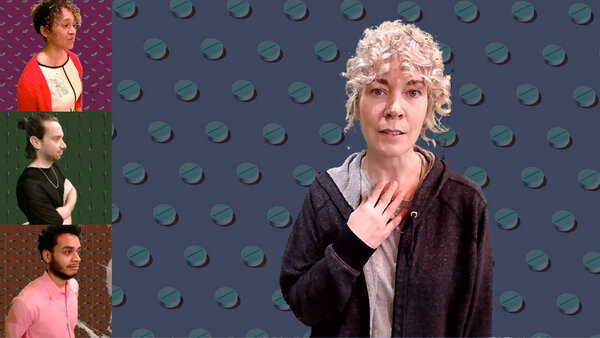 I’m afraid that’s also the problem with “A Day,” which continues through Saturday; the action is muffled by the elaborate (and admittedly transfixing) surface. Watching feels a bit like courting a headache by reading a spreadsheet with the hours of the day along one axis and the characters’ names along the other. Each, of course, gets aptly colored and patterned wallpaper: Upbeat, athletic Alfonso’s is orange, with dumbbells. Not until one of the four threatens to check out of the day entirely — as a hint, her wallpaper is blue, with pills — do the stakes grow high enough to disturb the play’s placid organization.

Even then, it feels small, perhaps because nothing in “A Day” resembles one of ours; it had its French-language premiere, as “Une Journée,” in Montreal two years ago, well before Covid-19. (The translation is by Taylor Gaines.) Something about living in a pandemic makes you want to watch bigger people facing bigger problems than generic sadness, deliberate or not. When I later learned, from an author’s note in the script, that the four characters might be aspects of one person, all I could think was: I wouldn’t want to spend a minute with him.

A Day
Through Nov. 21; thecherry.org.