When Prince Harry joined Meghan Markle at her CBS interview with Oprah Winfrey, all eyes were on the Queen’s grandson — who, in return, was visibly nervous, fiddling with his wedding ring and shifting in his seat as Oprah’s attention turned toward him. It was a nerve-wracking moment for both of them, to be sure, but Meghan, seated gracefully in an unnamed mutual friend’s Santa Barbara garden, embodied a serenity Harry couldn’t quite match as he came on. While body language experts have noted the emotional toll that telling these stories takes on Harry and the clear support he and Meghan find in one another (see: their interlocked hands), the Prince’s visible anxiety early on showed one other aspect of their relationship that has changed since their days in the Palace. Today, they’re back in Meghan’s comfort zone, whose time as an actress in Los Angeles prepared her for TV appearances like this — ones in which she’s given an opportunity to present herself and her thoughts to viewers. Harry, on the other hand, has only ever been taught how to represent the royal family and speak on their behalf. 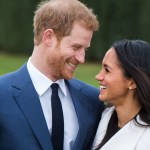 
The All-Time Most Romantic Photos of Prince Harry & Meghan Markle

On Oprah, we’re seeing Harry for the first time truly stripped of the protection of the royal institution, or firm. Of course, they’d literally stripped his protection in the form of a security team already, one of the main reasons he and Meghan stepped away, but Harry could still rely on his lineage and family relationships, feeling reasonably confident his importance to the royals would outweigh his transgressions thus far.

Stepping into this interview, Harry would be disabusing himself of that safety net, knowing just how firmly Princess Diana was cast out by the royal family after her infamous 1995 Panorama interview. And body language expert Judi James noted to Metro UK just how heavily he seemed to be leaning on Meghan’s support.

“They meshed their fingers together, so it was about as tight a handhold as you can get, and you could see them,” she said, “one would be rubbing their thumb onto the other one’s hands, even within that hand clasp.”

In explaining to Oprah that the true story behind many royal engagements was less cheery than the smiling photos, Meghan noted one photo set in particular from an evening at Prince Albert Hall, in which she’s seen smiling and holding Harry’s hand — despite the fact that, hours earlier, she had for the first time admitted to him her suicidal thoughts.

“In the pictures, I see how tightly his knuckles are gripped around mine,” she recalled. “He was gripping my hand and it was ‘Okay an intermission’s coming, the lights are about to come on, everyone’s looking at us again.”

With Oprah, it seems that they were communicating yet again through a hand squeeze — Meghan both bracing Harry for what’s to come and letting him know she’s there beside him. After years of Meghan trying to adjust to the only way of life Harry had known, he’s finally having to do the same.

Click here to see the 100 best photos of the royal family from the past 20 years.