Prince Harry’s interview with Anderson Cooper on 60 Minutes hasn’t even aired yet, but the Duke of Sussex has already answered a question that’s been on many royal watchers’ minds. We have the TV journalist to thank for getting to those hard-hitting questions and squashing any rumors for good about whether his royal exit is temporary or permanent.

In a preview clip for the Sunday interview, Cooper asked, “Can you see a day when you would return as a full-time member of the royal family?” Harry didn’t even hesitate as he shook his head and responded, “No.” There’s the answer everyone has been looking for — he is done with his royal life for good. That answer should come as no surprise to anyone who watched Netflix’s Harry & Meghan docuseries because the couple has firmly planted roots in Montecito with their two kids, Archie, 3, and Lilibet, 1.

Royal expert Jonathan Sacerdoti told Us Weekly that he believe Harry knows “there’s no way back” after he and Meghan made such a bold move. He criticized the dynamic duo for doing “everything they could to alienate themselves from their family,” but Harry is indicating that he’s hoping to reconcile at some point with King Charles III and Prince William.

“I would like to get my father back, I would like to have my brother back,” he said in the preview of his upcoming ITV interview. Harry believes the reticence is on his father and brother’s side. “They’ve shown absolutely no willingness to reconcile,” he added. However, there still might be a future relationship once the furor of Harry’s memoir, Spare, dies down. However, that rift will never get repaired until both sides acknowledge that they are on different paths in life — the royal path and the private citizen journey.

Before you go, click here to see more of Meghan Markle & Prince Harry’s milestones since leaving the royal family. 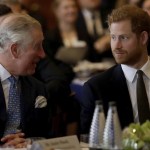 Brad Pitt Wants To 'Spend All His Time' With GF Ines De Ramon – Like In These Topless Vacation Pics!
Recent Posts