Pedro Bell, whose mind-bending album covers for the band Funkadelic gave visual definition to its signature sound in the 1970s and ’80s, died on Tuesday in Evergreen Park, Ill., near Chicago. He was 69.

George Clinton, the brains behind Funkadelic, announced his death on his Facebook page. Mr. Bell had been in poor health for many years.

Mr. Bell created his first cover for Funkadelic, the pioneering band that merged funk and psychedelic rock, in 1973. The album was “Cosmic Slop,” and it featured a topless woman, space imagery and mutants. Though Funkadelic and its sister act, Parliament, had been around for several years, Mr. Bell’s artwork and the liner notes he wrote under the name Sir Lleb (“Bell” spelled backward) helped define Funkadelic and its elaborate mythology. 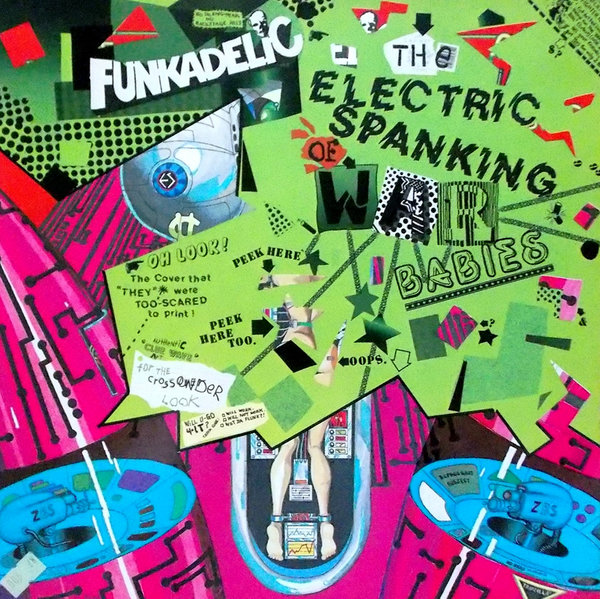 “Bell portrayed the members of Funkadelic as ‘The Invasion Force,’ a Technicolor assortment of alien superheroes, afronauts, mutants and cosmic warriors,” Lodown magazine once wrote in an article about him. “Their mission was to fight the good fight, ‘to rise and prevail’ in the ideological and musical ‘Funk Wars.’”

Mr. Bell referred to his artworks as “scartoons.” But Pan Wendt, who with Luis Jacob curated a 2009 exhibition at the Justina M. Barnicke Gallery in Toronto called “Funkaesthetics” that included Mr. Bell’s work, said they were hardly frivolous.

“The artwork of Pedro Bell was an essential component of the alternately utopian and dystopian world of P-Funk, which placed African-American reality in the context of a science fiction future that was both scary and hopeful,” Mr. Wendt said by email. “Pedro was a brilliant autodidact who was a key source of George Clinton’s ideology through his readings of science fiction, media theory and environmentalist tracts, as well as his knowledge of Sun Ra’s Afrofuturism.”

After his heyday as part of the Funkadelic inner circle, though, Mr. Bell encountered financial and medical difficulties. At the time of the “Funkaesthetics” exhibition he was living in a shabby single-room-occupancy hotel in Chicago, his eyesight almost gone, his kidneys failing.

“I spent many hours talking with him, often in the middle of the night, as dialysis made him woozy during the daytime,” Mr. Wendt said, “and it was clear from these conversations that P-Funk’s worldview was deeply indebted to his analysis and imagination.”

Mr. Bell was born on June 11, 1950, in Chicago. In 2010, when some of his art was included in an exhibition called “What Makes Us Smile?” at the American Visionary Art Museum in Baltimore, Mr. Bell recorded a biographical interview, conducted by his brother Maillo Tsuru Postelwait. In the interview he said that his father, John, “had four main jobs: a disgraced cop, postal worker, jackleg preacher, and a lifetime subscriber to the Ike Turner School of Domestic Disharmony.” His mother, Annette, he said, was a “Genius Humanitarian and Super Nurse, 1969 Dodge Charger purchaser, and late-in-life shifted to pharmaceutical drug abuser, via White Coat Syndrome.”

“I’m a self-taught Pagan,” he said, “who tried and completed around 156,000 credit hours at Bradley and Roosevelt universities, with a million credit hours in Weed Science and Decadent Sex (The Joy of Flex) and Last Pocket 8-Ball to balance out the damage of formal education.”

In his memoir, “Brothas Be, Yo Like George, Ain’t That Funkin’ Kinda Hard on You?” (2014, written with Ben Greenman), Mr. Clinton recalled how Mr. Bell came to his attention.

“Around 1972 or so, we started to get letters from a young artist in Chicago named Pedro Bell,” he wrote. “He doodled these intricate, wild worlds, filled with crazy hypersexual characters and strange slogans.”

“After a few months of delivering Pedro’s letters to us,” Mr. Clinton wrote, “the postmaster general wanted to know if I was involved in some kind of subversive organization.”

“Pedro’s correspondence,” he added, “gave me an idea for how we could move Funkadelic up a notch, how we could take what we were doing musically, and onstage, and capture some of that anarchic energy in the album packages.”

It was a time before streaming audio and viral videos, when an album’s cover art, especially for performers who did not get a lot of Top 40 radio play, was vital to capturing the attention of consumers. Mr. Clinton, who used Mr. Bell’s art on his solo records as well, acknowledged as much.

“To this day, Pedro’s covers are many people’s point of entry for Funkadelic albums,” he wrote. “When people talk about ‘Cosmic Slop,’ for example, they talk as much about the cover art as anything else: the way that the screaming face is inset into the woman’s Afro, her vampire fangs, the map on one nipple and the stereo dial on the other, the strange yellow bug off to the right of the woman with Pedro’s signature along its body.”

Rebecca Alban Hoffberger, founder of the American Visionary Art Museum, which focuses on outsider art, said that the “What Makes Us Smile?” exhibition included as guest co-curator Matt Groening, creator of “The Simpsons,” who suggested including Mr. Bell’s work.

“Fabulous, energetic, fun, smart — Pedro Bell is a real unsung hero,” she said in a telephone interview. But when the museum reached out to Mr. Bell, she said, he had little of his own art to offer; a museum overseas, she said, had borrowed much of it for an exhibition and not returned it.

“We bent over backwards to give him a lot of peace, because he had been hurt,” she said.

He was, however, able to provide the cover art he did for Mr. Clinton’s 1985 album, “Some of My Best Jokes Are Friends.”

Information on Mr. Bell’s survivors was not immediately available.

One of Mr. Bell’s more scandalous covers, for the 1981 Funkadelic album, “The Electric Spanking of War Babies,” raised alarm at Warner Bros. Records, which was concerned about the naked woman inside a phallic-looking spaceship he had included.

“I made a mess of money on that one,” he told Juxtapoz magazine in 1998. “They paid me to censor the cover.”

Mr. Clinton was especially fond of what Mr. Bell came up with for Funkadelic’s “Standing on the Verge of Getting It On” (1974): an alien landscape that was both scary and whimsical.

“It was a combination of Ralph Bakshi and Samuel R. Delany and Superfly and Fat Albert and Philip K. Dick and Krazy Kat and Flash Gordon,” he wrote in his book, “all mixed together in Pedro’s brain with some kind of blender that hadn’t even been invented yet.”

Neil Genzlinger is a writer for the Obituaries Desk. Previously he was a television, film and theater critic. @genznyt • Facebook