Home » Entertainment » Parenting Is Bad for Your Face Parenting Is Bad for Your Face 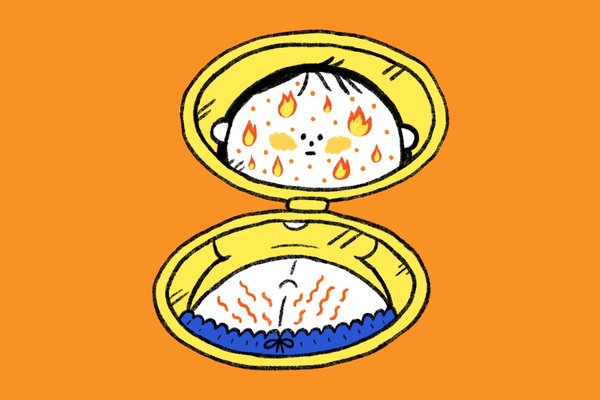 “You either have the best skin of your life during pregnancy, or the worst.” That’s something my dermatologist told me when I came to him with what I thought was a rash but turned out to be a face full of acne. I was about five months pregnant with my first kid, and in shock. I never had acne as a teenager — a pimple was a once-a-year occurrence. I thought when you were pregnant you were supposed to glow, not have your face burst into flames.

Turns out that for a good portion of the pregnant population, glowing is a lie! While the research on this isn’t great, studies show that about 40 percent of pregnant women have acne, and while the majority of those women had acne before pregnancy, more than 13 percent of them didn’t. The folks with no history of acne who flare up as adults are the “most angry patients of the day,” said Dr. Jenny Murase, M.D., an associate clinical professor of dermatology at U.C.S.F. Medical Center.

To add insult to injury for all of us with our first acne during pregnancy — it may be because we’re getting older, not just because we’re pregnant. Dr. Murase said an onset of acne in your early 30s is very well-described in the medical literature. Because I had my first child at 30, “With the timing, it was your age and you were coincidentally pregnant,” she said.

But that’s not the only skin condition that may crop up during pregnancy, postpartum and beyond — in fact, there are so many things that might happen to your skin and hair (skin tags! hair loss!), but I’m focusing just on a few major areas in this newsletter. I talked to three dermatologists about some skin conditions to look out for, and how to deal with them.

Acne: The bad news first. “There are very few ways to treat acne during pregnancy,” said Dr. Hilary Baldwin, M.D., medical director of the Acne Treatment and Research Center in New Jersey and New York. There aren’t good studies about the use of acne medication on pregnant women. (This is an issue that crops up with all medications during pregnancy: Most studies on pregnant women and medication are observational, which are not the highest quality studies.)

But there are a few medications that have no data indicating adverse effects, Dr. Baldwin said, including metronidazole, clindamycin and azelaic acid. All three come in topical form, and metronidazole and clindamycin, which are antibiotics, are also available as oral medications (though the oral forms of these medications are not recommended during pregnancy). Over-the-counter treatments that work and are appropriate for use in pregnant women are limited.

Pretty much all topical treatments are safe to use while you’re nursing, Dr. Baldwin said. “The absorption is extremely low,” so the chances of anything ending up in your breast milk are tiny. Any oral medication that’s safe for a baby to take is safe for a nursing parent to take, Dr. Baldwin said. If you have an acne flare up during pregnancy or postpartum, it might not resolve immediately, she added. You may need ongoing treatment even after you stop nursing, but at that point you will have more options for medication.

Pigmentation problems: During pregnancy, your nipples may get darker; you may develop a line down the middle of your belly called the linea nigra, which can take many months after your baby’s birth to go away; and you may also get melasma, otherwise known as the mask of pregnancy. Melasma is “characterized by tan or brown patches on the cheek, the forehead, the upper lip and portions of the face,” said Dr. Andrew Alexis, M.D., chairman of the department of dermatology at Mount Sinai St. Luke’s and Mount Sinai West.

Melasma can happen in anyone but is more prevalent among women of color, said Dr. Alexis, who is also the director of the Skin of Color Center at Mount Sinai. During pregnancy, Dr. Alexis recommends preventative measures, like staying out of the sun, to avoid melasma. Once the mask of pregnancy appears, azelaic acid can be used to treat the condition in pregnant and nursing women, and it can be used later on. If you’re not nursing, you can also use creams containing hydroquinone, or topical retinoids like Retin-A, to treat melasma after you give birth, Dr. Alexis said.

Stretch marks: “There’s very little evidence of any therapy that can prevent them,” Dr. Alexis said. Extremely moisturizing lotions like shea butter might help reduce stretch marks, Dr. Alexis has found anecdotally, though there’s no evidence to support it. There’s not much to be done treatment-wise during pregnancy and lactation for stretch marks, he said. But when you’re no longer nursing, you can try retinoids to reduce their appearance. You can also try laser resurfacing, “but it requires multiple sessions to get the results, and there are some nuances to treating women of color,” because with darker skin there’s a higher risk of skin-color changes, Dr. Alexis said. So if you are a woman of color, it’s paramount to find a provider who has expertise in doing laser treatments on women with darker skin.

One last thing: You may think that being concerned with skin changes during your child-rearing years is mere vanity, but there are real psychological consequences to untreated severe conditions, Dr. Baldwin said. Studies have shown that acne can lead to negative body image, lower self-esteem, depression and even workplace discrimination. Which is all to say: It’s not frivolous or shallow to care about the way you look when you’re also caring for a baby.

P.S. Forward this email to a friend. Follow us on Instagram @NYTParenting. Join us on Facebook. Find us on Twitter for the latest updates. Read last week’s newsletter, which is about the need for research and transparency when it comes to alternative medicine.

Want More on Your Body Before and After Kids?

We have a new guide by Katherine Hobson called “Know Your Uterus,” which includes fascinating and hilarious ancient myths like, “The organ was once thought to ‘wander’ throughout the body, butting up against other organs and causing problems ranging from sluggishness to choking to death.” Yikes!

O.K., O.K., some of you actually did “glow” during pregnancy and had beautiful hair. Self looks into why.

A 2018 study out of Northwestern University suggests that multiple pregnancies may make a woman’s cells age more quickly. While this study is by no means conclusive, I can personally confirm it by looking in the mirror.

Parenting can be a grind. Let’s celebrate the tiny victories.

It was time to teach our 5-year-old my phone number in case he ever got lost. He had zero interest in memorizing it … until I made it the passcode for our iPad. Guess who can call his mom anytime he needs to now?

If you want a chance to get your Tiny Victory published, find us on Instagram @NYTparenting and use the hashtag #tinyvictories; email us; or enter your Tiny Victory at the bottom of this page. Include your full name and location. Tiny Victories may be edited for clarity and style. Your name, location and comments may be published, but your contact information will not. By submitting to us, you agree that you have read, understand and accept the Reader Submission Terms in relation to all of the content and other information you send to us.

Men Who Aren’t Afraid of Tears