Take off your pants and put on your kilt, because we’re about to go on a road trip with Sam and Graham. That’s Outlander’s Sam Heughan and Graham McTavish. These two legends run amok around Scotland. And it’s the best (only) way to travel right now! While Outlander is a love story, Men in Kilts is a love letter to Scotland, friendship, and whisky.

For Outlander fans, just know you see Jamie and Claire (Caitríona Balfe) in the first few minutes. Why? Because of the beauty of flashbacks. Men in Kilts is the perfect solution to Droughtlander. This 8-episode docuseries will make you want to travel, eat, drink, and laugh. It’s a delightful virtual road trip to take with two friends, who admit it was friendship at first sight when they met on Outlander years ago.

So get ready, things are about to get very kilty. And very drinky (not a word, but whatever, you’re not the boss of me).

“We met on a show called Ooot-lander,” Sam says, as he drives the camper van with Graham in the passenger seat. (That’s how we should pronounce Outlander going forward.) Graham to Sam: “You had me at hello.” Okay no, he didn’t say that but in their Instagram live before the premiere, he said they became instant pals. Graham played Sam’s uncle, who Jamie and Claire then killed in season 2. Rude. He totally set you up and then you set him up. For death. As Sam and Graham embark on the first leg of their journey to Edinburgh, flashbacks of Jamie and Claire’s wedding, and other moments in Dougal and Jamie’s history, are shown.

Sam & Graham drive, eat, and drink (but not at the same time)

The premiere episode celebrates food and drink. That’s correct, drink. Singular. There is only one drink according to Sam Heughan. Whisky. No “e.” First stop is The Kitchin in Edinburgh, where Sam grew up. Chef Tom Kitchin throws a huge fish down in front of Sam and Graham. A halibut. Then he whips out some lobsters and scallops. Nice seafood flex, Chef. Graham makes it clear he doesn’t like sharing. Sam makes it clear he doesn’t care. He then grabs Graham’s lobster with a fork. And Graham looks like he may stab him with a fork. Ahh, friendship. Isn’t it beautiful?

Next, they go on a fishing trip, where Sam admits, “I don’t know what I’m doing.” Their boat captain is Captain Kirk. And yes, Sam proudly tells a Star Trek dad joke and Graham looks like he wants to throw him off the boat.

The best moment in the Men in Kilts premiere is when they are looking at their catch of the day, including shrimp, lobsters, and something that looks like a very large nipple. Sam catches hold of it and tries to stuff it in Graham’s chest pocket. And the camera pans over to Captain Kirk watching them fight over a sea nipple. (I genuinely do not know what that was). And his expression is the best expression you will see all week. Maybe year. Maybe ever. 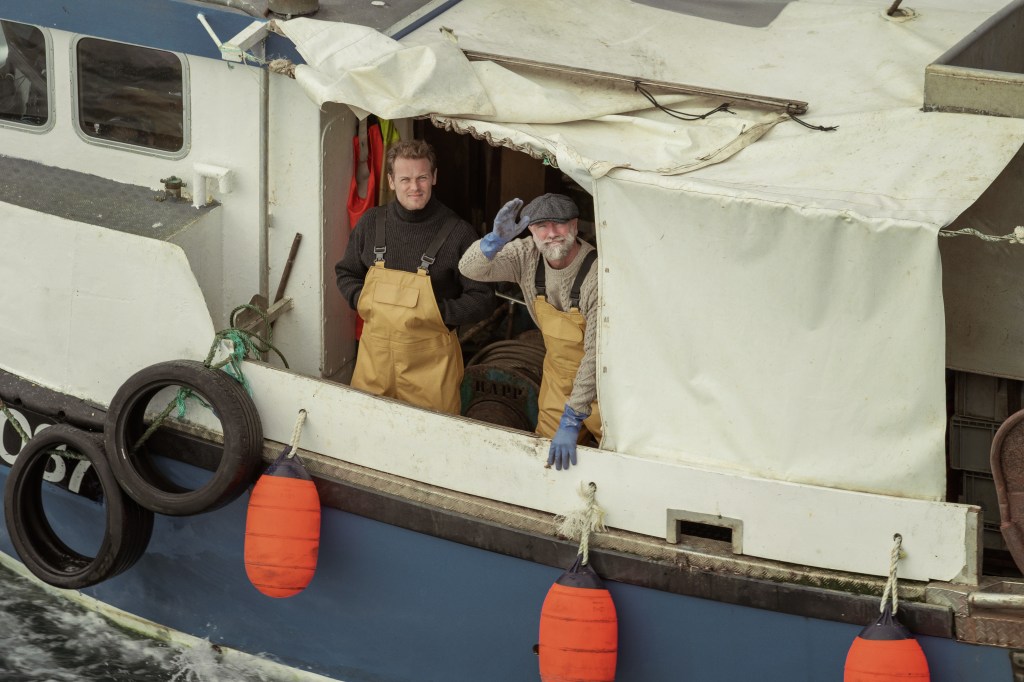 Sam and Graham can’t cook but they can eat

Next stop, cooking with Chef Tony Singh by the water. While Tony cooks, Sam and Graham eat. They are not great sous chefs. In fact, when it came time to “lobster” the lobster, Sam and Graham stepped away and looked out at the ocean asking Tony if he was done yet (a la kids on a car trip asking, “Are we there yet?”). To distract themselves, Sam says, “Oh look is that a dolphin?” Graham replies, “That’s a seagull.” As the chef dumps in some garlic, Sam tells him to not be shy because he’s not kissing anyone today. And Graham rolls his eyes.

By the way, Chef Tony is wearing a kilt. Sam and Graham are not! They’re wearing pants. I feel like we have been misled. Men. In. Kilts. Where’s the lie? Only Chef Tony follows the rules. 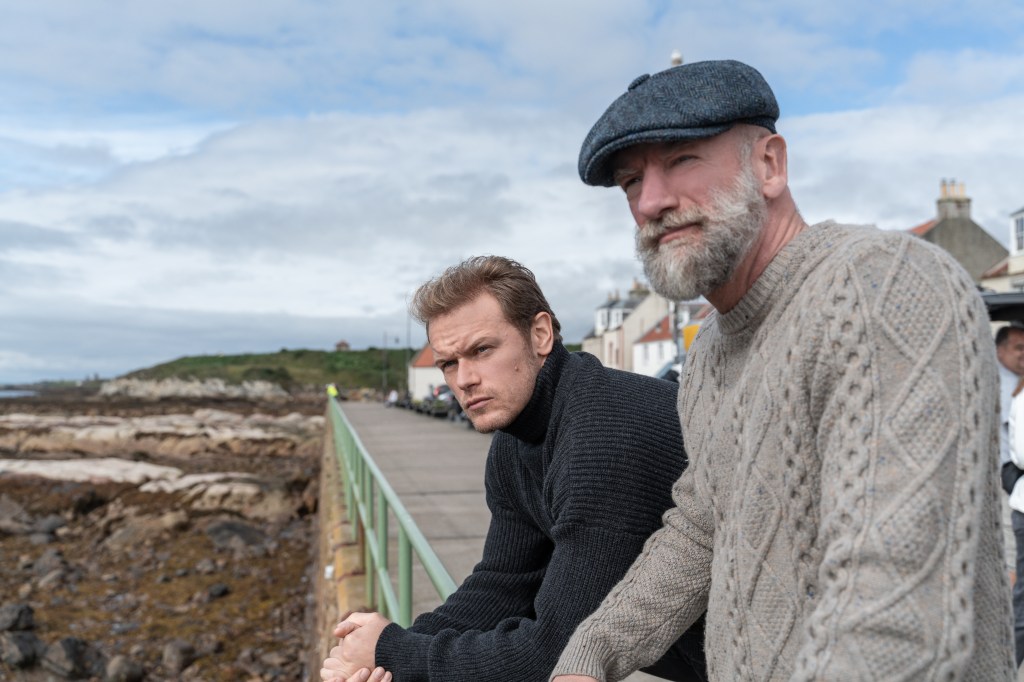 Prior to the premiere, they had a virtual cook along with Chef Tony. Sam Heughan is good in the kitchen if being good in the kitchen is defined as drinking whisky and watching someone else cook. Graham was a hologram, oh wait, make that a holograham. Seriously, he beamed in like Scotty through some vertical TV next to Sam.

The best way to see Sam cook is to watch a video he and Tony did for Tiny Kitchen. Let’s just say, if there’s a show called “Tony’s Kitchen” Tony probably won’t hire Sam. It was a tiny disaster.

The last stop is whisky. Sam loves whisky. Really loves whisky. He even has his own called “The Sassenach,” a tribute to Outlander and Claire Fraser. They even throw in a nice montage of Jamie and Claire drinking. You know what they say, the couple that drinks whisky together… stays together for 200+ (minus 20) years.

Sam takes us to whisky school. Cliff notes version: Peat, barrels, and barley, and you’re drunk. At the Laphroaig distillery, they dig up some peat. Actually, Graham digs and Sam tells him not to thrust. Sam is actually Michael Scott in this scene. The main ingredient in malt whisky is malted barley. Why should you care? Because Sam Heughan loves whisky so much that he jumped into a pool of barley. And by pool it’s important to note, it was about half an inch deep, so not sure that felt great for him though you wouldn’t know it because he made snow angels in the barley.

My wish for everyone on this Valentine’s Day is this: May you find a person who loves you as much as Sam Heughan loves barley. Some bottle of whisky out there has a hint of Sam and Graham’s jeans on it. Know this. Also, Sam’s shoe — because he empties the barley stuck in his shoe back into the barley pool. In their IG live today, they still remembered the barley fondly. “It was so soft,” Graham recalled. Sam added, “I still find bits of barley in my clothing.” Somewhere that barley is saying the same thing about Sam. 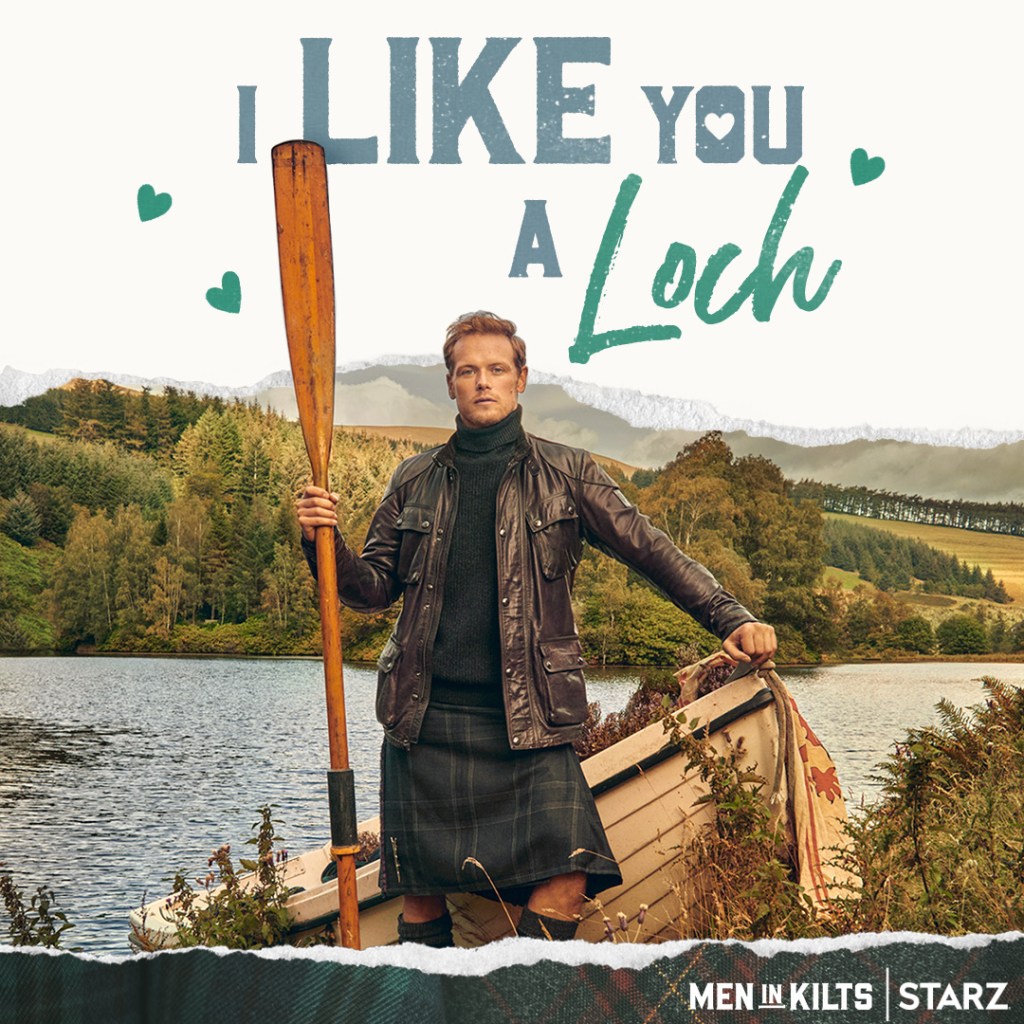 The preview for the next episodes showed Sam and Graham herding goats, dancing, playing sports, jumping into a waterfall, and somebody is naked running into the ocean.

This show gives us two things we aren’t getting right now. Travel and an Outlander-ish fix. It’s the perfect distraction from Droughtlander. And good news for fans, Outlander went back into production on Season 6 earlier this month. As for what else you will love about this show: Heughan is funny. And while we get to see Jamie Fraser laughing occasionally, Men in Kilts really shows his humor. And how much he simultaneously irritates and entertains McTavish.

If you can’t wait until next Sunday, read or listen to Clanlands, Sam and Graham’s book about their road trip. Stories about their Outlander co-stars Duncan LaCroix and Balfe pop up amidst their bickering. In their IG Live, they reveal they are planning more road trips. Sounds like a Season 2 to me. But for the next seven weeks, you’ll get a new 30-minute episode as Sam and Graham travel around Scotland. “Food and drinks, clans, tartans and witchcraft,” Sam teases. And it’s all building to, spoiler alert, the last episode where they go to Culloden. The Battle of Culloden is a big story point in Outlander (the reason Jamie and Claire are separated for 20 years) and Scottish history.

Last Valentine’s Day was the Outlander Season 5 premiere and this one you get to spend with Sam and Graham. Not too shabby. Could be worse. Could be in a pandemic, stuck at home. Too real. Sorry. But the next seven weeks of Men in Kilts should be a fun fix of Scotland, Sam, Graham, and general debauchery. And of course, Big Kilt Energy.

Before you go, check out the all-time best ‘Outlander’ episodes you need to watch (or re-watch).