One of Roxane Gay’s Go-To Recipes

A slight spin on Melissa Clark’s chicken Milanese has become a mainstay in the author’s kitchen.

This chicken Milanese is always a hit with Gay’s wife.

“Hi, I’m Roxane Gay, and welcome to my kitchen in Los Angeles. Today I’m going to be making chicken Milanese with my wife Debbie Millman. It’s her favorite dish, and it’s actually the first thing I ever cooked for her. When I moved into the house everything was painted white and I could not abide that. And so an amazing painter, Elder Solis painted the kitchen Farrow &amp; Ball Stone Blue. This is based on Melissa Clark’s New York Times recipe. You’re going to need chicken breasts, salt and freshly ground pepper. Olive oil, basil leaves, garlic, cherry tomatoes, fresh mozzarella, flour, eggs, panko breadcrumbs, grated Parmesan, unsalted butter and lemon wedges. I’m also going to throw a little oregano in there, because seasoning matters. So of course you start with your chicken. I’m going to pound them to make them really flat, because one of the things that makes chicken Milanese so great is the thin crisp. And of course, it helps you spread salmonella all across your kitchen. Now I’m going to season it, and I assure you, seasoning is your friend. Little oregano just to mix it up a little. So now I’m going to make the pesto. It says to use 2/3 of a cup of basil, but like honestly, who’s only going to use 2/3 of a cup of basil? Olive oil. The first person who invents a great way to cut garlic without wanting to die is going to win a lot of money. And a little salt to taste. Oh there it is. Look at that. So now you take your tomatoes and slice them in half, and this is the nightmare portion of the recipe. I share a lot of my cooking adventures on Instagram, and some of my food turns out great and some of it really doesn’t. I think it’s good to document that it’s not always going to come out right. So now you’re just going to toss some of this fake pesto. I forgot one thing. You’re supposed to add the mozzarella, too. So these are eggs from Schaners, a local farm. Yeah, I know, I’ve gone full LA. You want to put some flour in one bowl, at least two eggs in the second bowl, which is going to be in the middle, and in the final bowl, you’re going to put your panko, seasoned with whatever you want to season it with, and also some Parmesan. I also put a little oregano in there just for fun. So you let the butter and the oil melt and get hot. So first I’m going to do flour, dredge it in the egg, and then last but not least, you put it in the panko bread crumbs. Then you’re going to put it in the oil. So now the oil is too hot and disgusting, but it’s O.K., the food is still going to taste fine. So now we’re going to plate the chicken Milanese. You want to put a little of the pesto, little lemon wedge, little basil, just in case you want to chew on some fresh basil. Just a little Parmesan on top. And I’m done.” “Look at this.” “Chicken Milanese. Do you want to try it?” “I do.” “This is a real reaction. She does a little food dance.” “Amazing. I want more.” “O.K.” 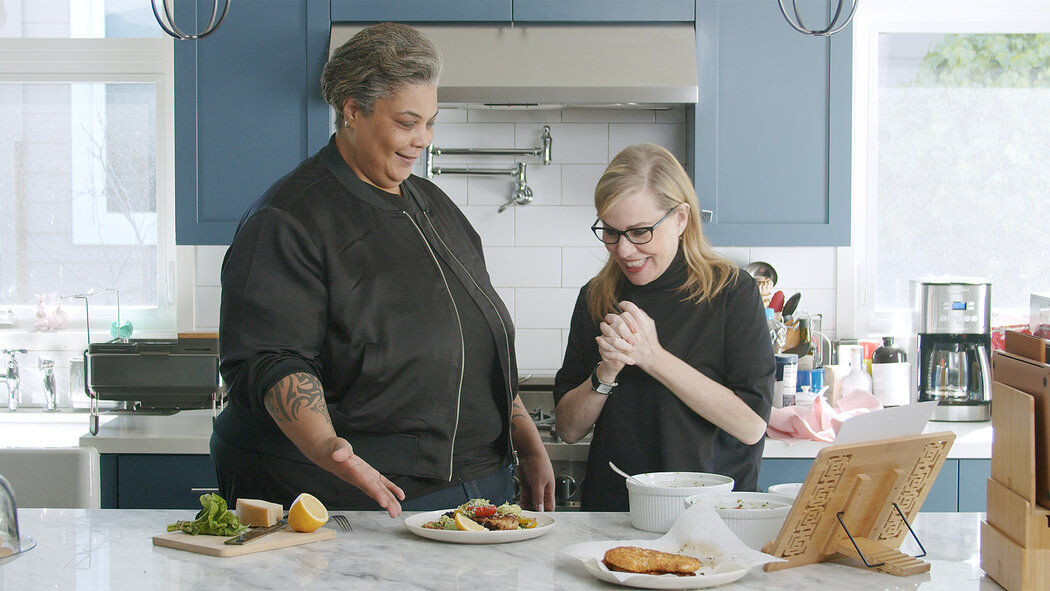 “I’ve gone full L.A.,” Roxane Gay recently told T, by which she meant she’s gotten into juices and cleanses and “going to the farmers’ market and getting super-fresh produce.” The 46-year-old media multihyphenate — she’s an author, a columnist, a film and TV writer and a podcaster — has lived “full-ish time” in Los Angeles for about three years now. She does, however, still make it to New York every two months or so, traveling with her wife, Debbie Millman, who is a designer, branding consultant, educator, writer and podcaster (the pair met when Gay was a guest on Millman’s podcast, “Design Matters,” and eloped last year), and their new puppy, Maximus Toretto Blueberry.