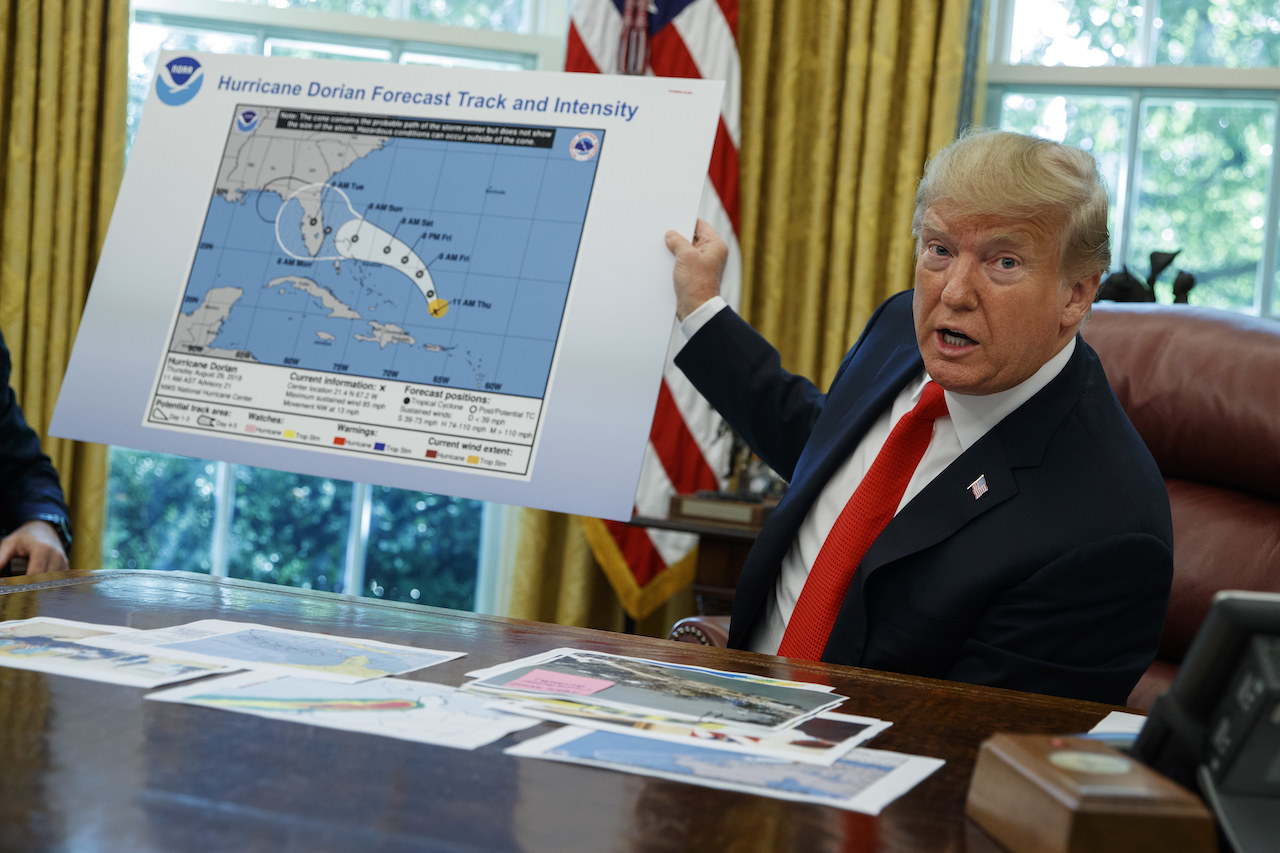 Showing no signs of backing down or even the slightest inclination to admit he was wrong, President Trump has insisted for five days straight that his false claim that Hurricane Dorian was set to smash into Alabama — contradicting forecasts from government meteorologists — was correct.

But the president’s relentless arguments and memes trying to prove himself right reached a tipping point Friday when the National Oceanic and Atmospheric Administration, the federal agency that oversees the National Weather Service, issued a statement from an unnamed spokesperson backing up the president’s claim and casting doubt on a local weather service forecast office which had tried to reassure Alabama residents that despite the president’s claim, there would be “no impacts” from the hurricane felt in the southern state. (The local forecast office proved to be correct.)

The NOAA statement said that information provided to the president and the public from Aug. 28 to Sept. 2 “demonstrated that tropical-storm-force winds from Hurricane Dorian could impact Alabama.”

“The Birmingham National Weather Service’s Sunday morning tweet spoke in absolute terms that were inconsistent from the best forecast available at the time,” it continued, supporting Trump’s claim.

The statement, and the agency’s decision to step into a political fight at the expense of scientists at the National Weather Service office immediately sparked outrage among meteorologists across the country, who fear a dangerous politicization of an agency that is based on science.

“You don’t want a hurricane to become a Democrat or Republican object,” Brian McNoldy, a senior research associate at the University of Miami’s Rosenstiel School, told BuzzFeed News. “A hurricane doesn’t care what political party you’re affiliated with, and I really hope it doesn’t turn into that.”

For many meteorologists in the field, the NOAA statement was a clear political move by a federal science agency designed to appease the president’s false claim that Alabama was in danger, while throwing the local Birmingham weather service office under the bus.

And several weather experts in the field were quick to show their support of the Birmingham office, pointing out that their Sunday tweet, and hurricane models for Dorian, were correct.

“The Birmingham office in particular represents the best in that agency,” Matt Lanza a meteorologist with Space City Weather told BuzzFeed News. “They deserve better than to be falsely blamed for something like this.”

McNoldy said no one disputes that early forecasts of Hurricane Dorian, which smashed into the Bahamas as a Category 5 storm, suggested there was a tiny probability that Alabama could see some tropical storm-force winds. But by the time Trump tweeted on Sunday night that Alabama would “most likely be hit (much) harder than anticipated” forecasts and computer models had shown for days that Dorian was making a right turn off of Florida’s coast, completely missing Alabama and instead heading toward the Carolinas.

“It was like he was getting information that was two or three days old,” McNoldy said.

For five full days, President Trump has defended his false claim, attacking an ABC News reporter who fact-checked his tweet, posting memes and, on Wednesday in one of the most head-scratching moments of his administration, displaying in the Oval Office a doctored hurricane forecast map that had been noticeably altered with a black marker to include a threat to Alabama.

For those in the field, the NOAA statement siding with Trump at the expense of weather service forecasters seemed to be the last straw in the fight.

“There’s not many things you can get all people to agree on,” McNoldy said. “Everyone is against whoever that NOAA person is.”

Officials at the NWS Birmingham office could not be reached for comment. NOAA also did not respond to requests for comment.

Meanwhile, support for the forecasters continued to pour in on social media from meteorologists and other weather experts.

Employees with the NWS also spoke out and suggested that NOAA’s statement, along with Trump, had undermined public faith in the accurate and timely information provided by forecasters during life-threatening events like hurricanes.

“The Birmingham office is full of forecasters who are dedicated in service to their communities,” Bryan Wood, a meteorologist based in Ohio told BuzzFeed News. “Their work is apolitical and I believe the tweet was nobly sent because they were concerned that the people of Alabama might panic in response to seeing the president’s tweet.”

Among those who responded to NOAA’s statement was Dan Sobien, president of the union representing National Weather Service employees, calling it “utterly disgusting.”

But the biggest concern, McNoldy said, is the doubt that the NOAA statement could sow into the public.

The precise forecasts distributed by the National Weather Service could mean the difference between life and death for communities, especially during dangerous events like hurricanes or tornadoes. NOAA’s decision to defend the president in a political fight over a scientific matter, he said, is dangerous.

“There’s enough uncertainty in a hurricane forecast as it is,” McNoldy said. “We don’t need to introduce a whole lot more.”