Men Who Aren’t Afraid of Tears

Yes, Jake Gyllenhaal was crying, but it was a dignified kind of crying. Less sobbing, more welling. “Sorry,” he said, collecting himself. “I hate this. It seems performative in an interview.” But if you open yourself to the problem of existence in what may or may not be a determinate universe — which is what Mr. Gyllenhaal was doing on an afternoon two weeks ago — tears happen.

Two weeks ago, Mr. Gyllenhaal and his co-star, Tom Sturridge, were sitting on a gold velvet sofa in the lounge of the Hudson Theater, where they would soon resume rehearsal for “Sea Wall/A Life,” paired monologues directed by Carrie Cracknell, that played at the Public Theater last winter and will open on Broadway on Aug. 8. In “Sea Wall,” by Simon Stephens, Alex (Mr. Sturridge), a husband and father, recounts a seaside holiday and the catastrophe that shatters it. In “A Life,” by Nick Payne, Abe (Mr. Gyllenhaal), another husband and a dad-to-be, interlaces the death of his father and the birth of his child. 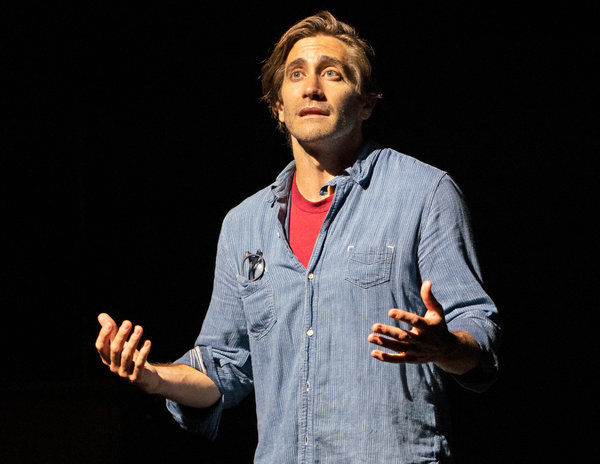 As monologues, as one-acts, as meditations on, as Mr. Gyllenhaal put it, “the terror of loving,” the plays are not obvious Broadway fare. “We’re taking a gamble,” said Mr. Gyllenhaal, whose company, Nine Stories Productions, is a lead producer. It’s actually a safe bet. Advance sales have been brisk, a press representative told me, the production’s modest $2.8 million capitalization nearly recouped. How to explain those advance sales? Look up. On 44th Street, the actors’ stubbled faces brood from the marquee, promising intimate encounters with handsome leading men.

But these are leading men who have never been entirely comfortable with typical leading men’s roles. And in these plays, each actor performs a kind of masculinity rarely seen on Broadway, one that wears cardigans, that leads with empathy, that admits to an emotional life — that sometimes cries a little.

In an interview, Mr. Gyllenhaal — animated, sincere — did a lot of the talking, and Mr. Sturridge — soft-spoken, circumspect, wearing a T-shirt that read “i have just now returned from the other side of the moon,” which seemed very on brand — did a lot of the listening. Together they explained the twisty way these plays and these two occasionally teary characters came together.

In 2009, a then-unknown Mr. Sturridge was cast as the lead in Mr. Stephens’s “Punk Rock” and later appeared in his play “Wastwater” in 2011. In 2017, Mr. Stephens came to see Mr. Sturridge at the Hudson Theater in “1984.” Moved by that performance, Mr. Stephens gave him “Sea Wall,” a monologue originally written for the actor Andrew Scott.

Mr. Sturridge saw himself in it — “which is very unusual for me,” he said.

“I’ve always thought that I’m best at being people who are very far away from who I am,” he added. “It was very strange to be attracted to something that seemed frighteningly not so far away.”

Mr. Gyllenhaal and Mr. Payne (who declined to be interviewed for this article) also have history. Around 2010, Mr. Gyllenhaal selected Mr. Payne’s “If There Is I Haven’t Found It Yet” from a stack of scripts that Manhattan Theater Club had given him. He starred in that play Off Broadway in 2012, then brought Mr. Payne’s “Constellations,” another work about the terror of loving, to Broadway in 2014. During rehearsals, Mr. Payne gave him an early version of “A Life,” a monologue that the playwright had performed himself.

When he read it, Mr. Gyllenhaal said, “I laughed and I wept and I came back to it probably monthly.” He had been searching, Ms. Cracknell told me, for a project “more connected to himself than some of the things he’s been doing in film recently.”

“He was interested in playing and kind of excavating something very, very honest,” she said, “and very connected to him.” He asked Mr. Payne if he could perform it. He asked again and again, for years. Mr. Payne refused, saying, as Mr. Gyllenhaal recalled: “I don’t want anyone to do it. Sorry. It’s mine. And it’s for me, and it’s very personal.”

Mr. Gyllenhaal and Mr. Sturridge share a theatrical agent, John Buzzetti. And Mr. Buzzetti knew that each client, who hadn’t yet co-starred in the Netflix art-world chiller “Velvet Buzzsaw,” had a monologue he was desperate to perform. He looked at both plays and noted the overlapping themes — fatherhood, loss, faith. “Wow, this will work,” he thought, as he recounted in an email. In 2017, he and Ms. Cracknell organized a reading at the Public Theater.

“It was terrifying, actually,” Mr. Sturridge recalled. “We literally walked into a room as strangers and we did it pretty straight away.”

They had no set, no costumes, no rehearsal. “My god, it was powerful,” said Oskar Eustis, the Public Theater’s artistic director. With the permission of Mr. Payne and Mr. Stephens, he programmed it immediately.

“Sea Wall/A Life” was built last winter, with each actor asking to sit in on the other’s rehearsals. Ms. Cracknell encouraged, she said, “a kind of very truthful, quite pared back and detailed kind of acting.” She watched the men create imagined worlds, informed by lived experience. She urged them to bring the characters closer.

Mr. Gyllenhaal had originally performed “A Life” in an English accent, but she asked him to use his own voice. “I need you terrified up there and terrified to just be open,” she told him. (Recalling that moment is what made Mr. Gyllenhaal tear up in the interview.) Mr. Sturridge, who typically prefers the protection of “something that’s as far away from me as possible,” found himself filling out the character with his own DNA.

During rehearsals and previews, the two men forged a friendship. Mr. Gyllenhaal hadn’t assumed that they would. At a distance, he had experienced Mr. Sturridge as awkward, uncomfortable, quiet, but up close he found him “the warmest, most open, loving, funniest, goofiest dude,” he said.

Mr. Sturridge ribbed him. “For nine more weeks,” he said.

They wear similar necklaces now, which Ms. Cracknell had identified as a gift from Mr. Gyllenhaal. He denied this, but he did say that during a post-matinee shopping spree at a Japanese camping store, they had bought matching jackets.

In performing plays about fatherhood, Mr. Sturridge, who has a daughter with the actress Sienna Miller, might seem to have an advantage. “To a degree that feels raw, that feels scalding, he draws completely from his own life,” Mr. Stephens said, speaking by telephone from London. Mr. Sturridge did not want to discuss any of that. “It just feels like it devalues whatever I have that’s real,” he said.

Mr. Gyllenhaal is not a father. Or a mother, he added, though the script asks him to briefly assume the role of Abe’s wife. (His sister, the actress Maggie Gyllenhaal, has given him notes, particularly in the birth scene.) He colors his character with his own fantasies of what it would be like to have a child or to lose a parent. He makes emotional analogies. “I certainly can speak to love,” he said. “I can speak to the responsibility of holding someone else’s heart.”

Love is an overarching theme in both plays. So is a kind of existential helplessness. Abe and Alex don’t rescue or triumph or avenge themselves. They don’t punch. They don’t shout. There is so little they can do, except to recount events, chart emotional response and sometimes, as Alex says, “have a bit of a cry” in the toilet.

As Ms. Cracknell, whose work often explores gender roles, said, “the writers are talking in a very raw and open way about frailty and fear and hope.”

“And that’s really unusual,” she added. “We still struggle to depict men coming to terms with or battling with their feelings.” Mr. Eustis called it “the least toxic masculinity you can imagine; there is nothing about their masculinity that poisons those around them.”

We don’t necessarily associate roles like these — passive, emotive — with leading men. But as Dan Gilroy, who directed the duo in “Velvet Buzzsaw,” noted, neither of these actors “make what you would call typical career choices.”

“They’re both doing incredibly well by following very unique idiosyncratic paths,” he said. “Jake and Tom are going, like, where’s my artistry leading me? Where is my curiosity leading me?”

Was it curiosity around masculinity — questions of what men should do and be — that had led them to these roles, that had pushed them to re-create them on Broadway?

“I’ve searched for masculinity in a lot of things that I’ve done,” Mr. Gyllenhaal said. “And I’ve played characters that I think are sort of overtly cliché, masculine characters, because I’ve thought, Oh, maybe I can find something out about that idea in playing that character.” Someone like Abe, who is working through his feelings every night, who is struggling to communicate and connect, is another part of that search. “He is where he is, and that to me, as a man, is so, so helpful, and it’s so inspiring,” he said.

This plays are selling well. And maybe these alternative visions of what men could be will sell, too.

If not, don’t blame the actors. After the interview ended and I’d packed up my things, I saw them again, leaning back against a black town car in front of the theater and smiling up at the newly installed marquee and their giant, anguished faces.

“Should we hand out fliers?” Mr. Sturridge asked eagerly.

A fan approached, a man in a blue Oxford. Mr. Gyllenhaal obliged with a firm handshake. The man walked on.

“Come back,” Mr. Gyllenhaal called after him. “Buy a ticket!” 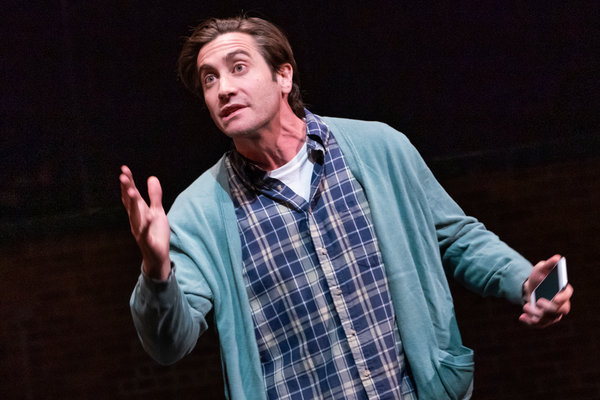 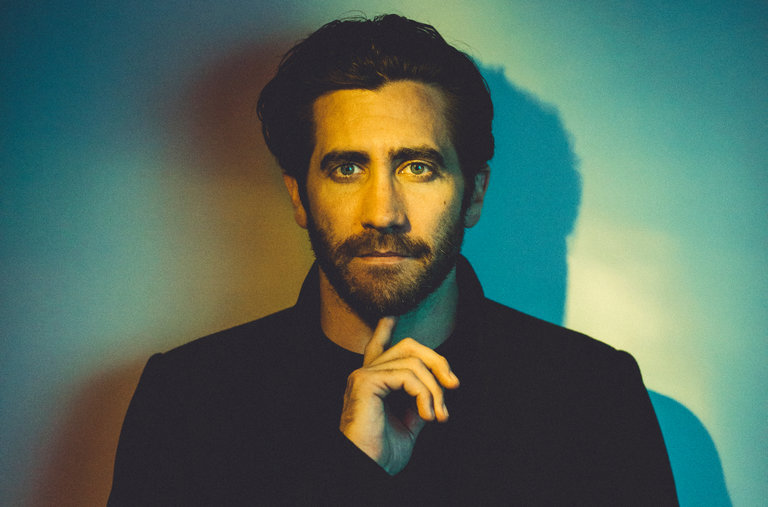 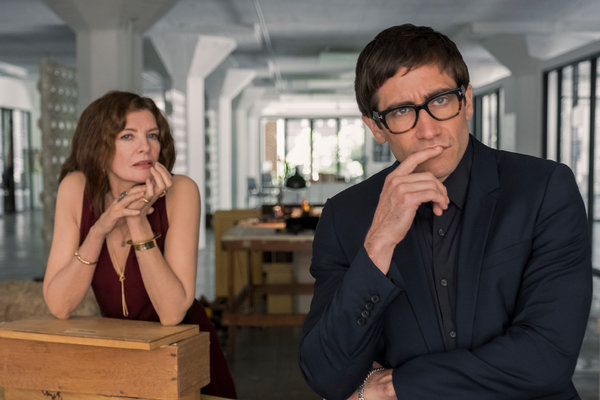 Parenting Is Bad for Your Face
Recent Posts