‘Little Shop,’ Big Relief: How One Theater Safely Put on an Indoor Show

A rural locale. Few Covid-19 cases nearby. Performers in a bubble. And a man-eating plant that couldn’t quite chow down on its victims. 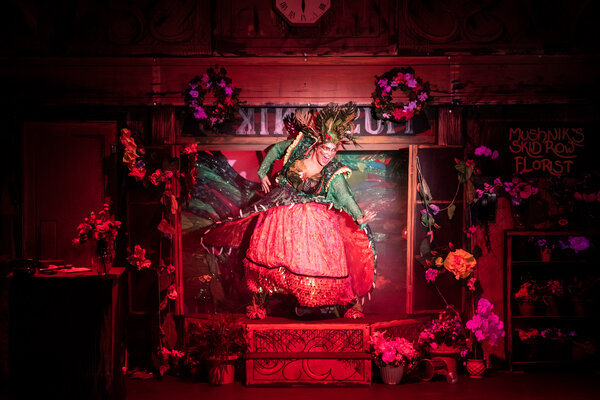 WHITEFIELD, N.H. — The last choruses of “Don’t Feed the Plants” reverberated across the mostly empty theater. Shredded paper fell from the lighting grid. The 44 masked ticket holders, meticulously spaced out across the 250 seats, rose for an ovation, then waited for directions about which doorways to use to reduce crowding as they filed out into the autumn sunshine.

Ethan Paulini, who played the sadistic dentist in the production of “Little Shop of Horrors” that ended with a matinee here on Sunday, removed his white lab coat and offered the hint of a smile from behind his black mask.

At a time when professional theater in America is paralyzed by the coronavirus pandemic, a reopening milestone was achieved here in the northernmost reaches of New Hampshire, where the nation’s first indoor production of a show with multiple Equity actors since theaters shuttered in March just concluded its run. 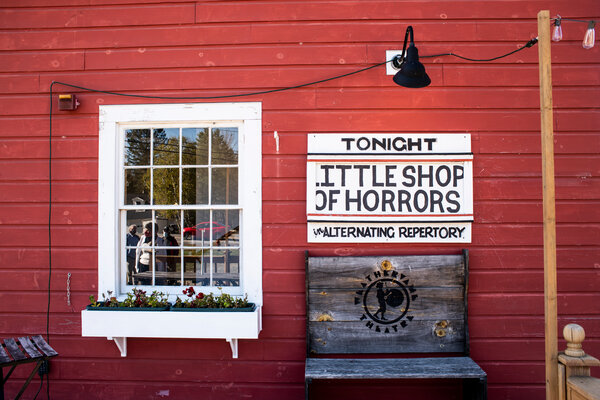 In some ways, the moment seems strangely modest, given that in parts of Europe and Asia, theater is back in some big cities. But the United States has controlled the virus less well than other countries — the American per capita death rate is higher than that of many other nations — and as a result, the performing arts are particularly hobbled here.

That has left innovation, with the exception of a few one-person shows, largely to small theaters in rural areas where the pandemic has been less scourging. In August, a production of “Godspell” at Berkshire Theater Group in Western Massachusetts became the first outdoor musical with union actors performed in this country during the pandemic. This “Little Shop,” in the Great North Woods region of New Hampshire, was the big indoor test case.

“This was an experiment, and it could have gone either way; we could have failed miserably, or we could have succeeded,” said Jorge Donoso, 29, who played Seymour and also serves as the company’s development director. “But we’ve definitely succeeded, and I hope this gives a little bit of confidence to people.”

Weathervane, a seasonal theater where a drummer typically summons patrons back to their seats following intermission, started with a key advantage: It is in a remote area, bordering the White Mountains, with very little coronavirus. Whitefield, the 2,200-resident town where Weathervane is based, is part of Coos County (pronounced co-oss), which as of Wednesday had no deaths attributed to the pandemic.

The theater had another asset, like other regional theaters that import most of their actors: It owns housing, which this year made it relatively easy to isolate cast and crew members from the general population. The Weathervane puts up employees in a 62-room former hotel each summer, and because there are few restaurants or grocery stores nearby, it hires a chef to prepare meals.

That allowed the cast, crew and musicians to create a quarantine bubble together, starting for many in June, so that when they finally got permission to perform, their risk was low. The company had even set aside a 12-room carriage house to isolate anyone who tested positive; it was never used.

“Everyone took it very seriously, because no one wants to be the person that messes it up for everyone,” said Paulini. “We made it pretty clear it was grounds for immediate termination if we heard somebody was not complying.”

Citing that bubble, this show, unlike the production of “Godspell” in the Berkshires, did not use partitions, masks or social distancing onstage. Concluding that the actors were not a risk to one another, the company allowed the performers to touch, pass props and sing together.

The actors had all kinds of anxiety. Robert H. Fowler, 59, who lives in New Jersey and first performed here in 2010, said he was apprehensive not only about the virus, but also about returning to a predominantly white area as a Black man during this year of intensified unrest over racial justice.

But Fowler, who is also the company’s associate artistic director, said that as soon as he saw an audience — in “Little Shop” he played Mr. Mushnik, the plant store owner — he knew he had made the right decision.

“It was apparent that they longed for it,” he said. “It was overwhelming.”

Of course, for many, coming to New Hampshire was also a chance to escape New York.

“I was excited to not have to hear the sirens every day,” Donoso said. “Where we are staying, you can see mountains for miles, so it was serene.”

The actors were also happy to be working, earning not only a salary but credit toward health insurance, which few are able to do this year. “I feel grateful to be the guinea pigs,” said Marisa Kirby, 32, who is spending her third summer at Weathervane, playing Audrey in “Little Shop” and running the intern program. “We’re lucky.”

They started slow: canceling a few preseason events scheduled in June, then allowing a company of student interns to perform outdoors for children and then indoors for no more than 20 people. (Those performances were streamed, too.)

The professional actors started out streaming musical revues, and then in August, after submitting an 84-page safety plan, they got permission from Equity to stage three fall shows in repertory. It was the theater’s inaugural fall season, which ran through Columbus Day, when the region is laden with leaf peepers.

Plenty of patrons were eager to return. “There was no question but that we would go,” said Lorain Giles, a 69-year-old retired United Church of Christ pastor. She and her husband, Bill, live in Massachusetts, but spend each summer in nearby Lunenberg, Vt., and the Weathervane is a regular part of their routine.

“We refused to live in fear,” she said. “We trusted them, and wanted to to celebrate them being open, and we were just glad to be out among other human beings.”

But there were also those who held back. Beth Cape, 56, who owns the local Barron Brook Inn and works at the Northern Gateway Regional Chamber of Commerce, was eager to see the theater reopen — the area was already struggling, and the pandemic has dealt a tough economic blow. But she opted not to go to any shows this year, because her husband has a health condition that might make the virus more dangerous for him.

“Some years, it’s like magic in a bottle — you’re sitting there and your hair is standing up on your arms, because they’re that good,” she said of the theater. “But my husband’s life is worth more than me taking part in things right now.”

Weathervane, founded in 1966, is in the lowest income region of New Hampshire, according to Phil Sletten, a senior analyst at the New Hampshire Fiscal Policy Institute. It has a high population of seniors, and a reliance on tourists (ATV riding and snowmobiling are popular activities) and second homeowners to help the economy.

The theater expected to have a $650,000 annual budget this year but wound up spending less because of canceled summer productions. It normally raises about half its costs through ticket sales; this year it will raise just 20 percent that way, and will make up the difference through fund-raising and a grant from the state of New Hampshire.

Even in healthier years, the theater has periodically been in financial danger. “My thought was that if the theater didn’t open this summer, it would never open again,” said Debi Soukup, a 66-year-old retired teacher who lives in Florida but spends summers in Whitefield.

The theater took precautionary steps that have become standard for professional performance during the pandemic: regular testing of cast and crew for the virus; temperature checks for ticket holders; and no seating within 20 feet of the actors, to keep patrons far from any aerosols during singing.

“One of the things I like about the Weathervane is that after every performance you get to talk to them,” said Judy Dean, a 74-year-old retired Presbyterian pastor and season ticket holder from nearby Littleton. “That camaraderie didn’t happen, and I missed that.”

Less obvious, but important for all indoor professional performances at the moment: The Weathervane just last year had installed a new heating and air conditioning system, which matters because safety protocols generally require modern systems that more effectively filter air during performances and fully purge the indoor air between shows.

The effect on the staging of “Little Shop,” which ran in repertory with a revue and a play, were minimal. Most significant: Paulini, unwilling to put puppeteers in confined spaces, ruled out using a large puppet (frequently used in other productions) to represent the bloodthirsty plant at full height.

Instead, Audrey II (that’s the plant’s name) was incarnated by an actress, Monica Rosenblatt, cloaked in foliage and wearing an upturned hoop skirt designed to look like a maw.

And at the end of a show in which “the human race suddenly encountered a deadly threat to its very existence,” Donoso, as Seymour, crawled through the plant’s toothy legs and vanished backstage.

COVID-19 caused two-thirds of excess deaths in the US: study
Recent Posts