Stephen Colbert pointed out that 12 Republicans running for secretary of state have publicly voiced concerns about the validity of the 2020 presidential election.

Send any friend a story

As a subscriber, you have 10 gift articles to give each month. Anyone can read what you share. 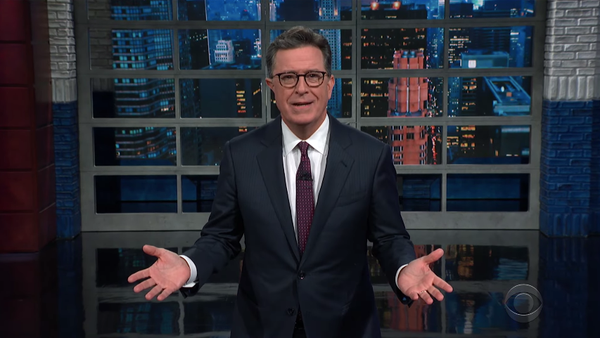 Welcome to Best of Late Night, a rundown of the previous night’s highlights that lets you sleep — and lets us get paid to watch comedy. Here are the 50 best movies on Netflix right now.

Not Just a River in Egypt

Several Republicans up for election in the midterms have voiced distrust in the validity of the 2020 presidential election. On Wednesday, Stephen Colbert said he was especially frightened by the 12 running for secretary of state across the country, saying that their wins could mean “the election deniers might be running the next election.”

“That doesn’t seem right. That’s like saying, ‘Hey, we need a babysitter — how about Cassandra the Dark, denier of children? I know, I know, but she really wants the job — or don’t you enjoy date night?’” — STEPHEN COLBERT

“Anything can happen, and as a reminder of that, today is the 74th anniversary of one of the greatest election upsets ever. In 1948, Harry Truman beat Thomas Dewey. No one expected Truman to get re-elected, particularly not the Chicago Tribune, which led to one of the most iconic photos in U.S. history: a victorious President Truman holding up the early edition of the paper that incorrectly declared ‘Dewey Defeats Truman.’ It’s very famous. And that blunder led to another iconic photo the next day: ‘Dewey Says Election was Rigged,’ followed by, ‘Frankly, Dewey Did Win This Election’ and ‘Dewey Supporters Raid Capitol, Poop on Floor.’” — JIMMY KIMMEL

“At a campaign stop in Wisconsin, Republican Senator Ron Johnson said that he is not sure if he will accept the results of next week’s midterm elections and added, ‘Do Democrats have something up their sleeves?’ Have you met the Democrats? They famously have nothing up their sleeve. The best they can manage is a quarter behind the ear.” — SETH MEYERS

“Then, over in Nevada, you got former state representative and news anchor from the future telling us about life before the event, Jim Marchant. Marchant ‘falsely claims the former president defeated Joe Biden in Nevada and has said he wouldn’t have certified the results there in 2020,’ and has pushed the ‘false claim that Pelosi, Schumer, and Schiff weren’t legitimately elected.’ Oh, so he’s just denying every election: ‘Schumer lost! Schiff cheated! Justin Guarini beat Kelly Clarkson! I won the J.D. Power and Associates initial customer satisfaction for midsize family van!” — STEPHEN COLBERT

The Punchiest Punchlines (In the Swing Edition)

“Tonight, Biden delivered a prime-time speech from Capitol Hill about the midterm elections and said it could take several days for all of the votes to be counted in some swing states. Unfortunately, after these past two years, every state is a swing state.” — JIMMY FALLON

“Yeah, a lot of experts are predicting a red wave on Election Day. You can tell Biden is nervous because he already hired Rudy Giuliani to challenge the results.” — JIMMY FALLON

“President Biden also said that next week’s midterms are the ‘most important election of our lifetime.’ And that’s saying something coming from a guy who maybe voted for Lincoln?” — SETH MEYERS

After a two-year hiatus, “Jimmy Kimmel Live” brought back its annual YouTube Challenge, which asked parents to record their children after being told their parents ate all their Halloween candy.

What We’re Excited About on Thursday Night

After a brief acting hiatus, Jennifer Lawrence returns to the screen in “Causeway,” an AppleTV+ drama in which she plays an injured military engineer who comes home to New Orleans for an uneasy convalescence.