Welcome to Best of Late Night, a rundown of the previous night’s highlights that lets you sleep — and lets us get paid to watch comedy. Many of us are stuck at home at the moment, so here are the 50 best movies on Netflix right now.

‘The Showman vs. the Joe-Man’

“Tonight was the opening round of Donald Trump versus Joe Biden; the Battle of the Boomers; the Showman versus the Joe-Man,” Stephen Colbert said. “Get ready for democracy to crumble!”

“It got off to an interesting start, you know; they flipped a coin to determine who would get the first question, but when Trump saw the quarter in the air he said, ‘Hey, that’s how much I paid in taxes last year,’ and it went downhill from there.” — JIMMY KIMMEL

“We have emerged from the mad whirlwind where we gazed upon the forbidden countenance of God himself, and he said unto us, ‘Jesus, stop interrupting him, you giant baby!’” — STEPHEN COLBERT

“Seriously, did anyone take anything away from tonight? Was that helpful to any American? The only person who enjoyed that was Vladimir Putin while he was stroking a cat.” — JIMMY FALLON

“Yes, tonight saw the best minds of our generation destroyed by madness, starving, hysterical, naked, dragging themselves through the streets at dawn, looking for the mute button.” — STEPHEN COLBERT

“Honestly, sitting through that debate felt like getting a Covid test in both nostrils at once.” — JIMMY FALLON

“Actually, tonight’s debate made history. It was the first time Americans ever watched something on TV and wished there were commercials.” — JIMMY FALLON

“You know it was a rough debate when the guy who told the president to shut up was seen as the classy candidate.” — JIMMY FALLON

“Because of the pandemic, there’s no opening handshake tonight; there’s no physical contact. The candidates remained socially distant the whole time. It was like date night with Melania.” — JIMMY KIMMEL

“I’d call it a nightmare, but at least during a nightmare you get some sleep.” — JIMMY KIMMEL

“I come to you tonight, ladies and gentlemen, an empty vessel, a man with a mind wiped clean. I have stood in the swirling chaos of creation. I have seen Shiva dancing the destruction, wielding his trident carving great gouts out of the universe. The sky at once both red, blue and black until all that remained was a starless void and the hollow husk once known as Chris Wallace.” — STEPHEN COLBERT

“Before the debate, Chris Wallace said if he did his job right, it would be like he’s not there. Well, mission accomplished.” — JIMMY FALLON

“You know things are getting heated when the moderator pleads, ‘Please, gentlemen, let’s return to the topic of race.’” — JIMMY KIMMEL

“Things got really ugly. After the debate was over, Wallace said he wants to moderate something a little more civil, like a ‘Real Housewives’ reunion or a back-alley knife fight.” — JIMMY FALLON

What We’re Excited About on Wednesday Night

Hillary Rodham Clinton will surely share her opinions about the presidential debate on “The Late Late Show” on Wednesday. 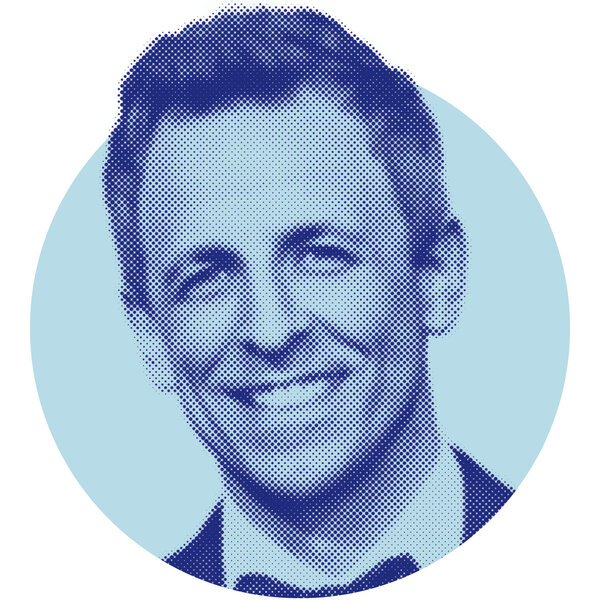 Seth Meyers shares some of his favorite cultural touchstones (including Monty Python and John Prine) in this week’s My Ten.