Hear tracks by FKA twigs, Jupiter & Okwess, Prettymuch and others. 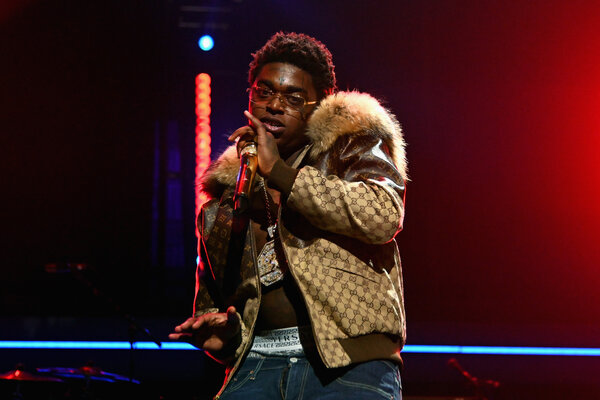 In 2019, Kodak Black pleaded guilty to a federal weapon possession charge, the latest in a string of legal troubles for the Florida rapper. But earlier this month, a surprise twist: Kodak Black’s sentence was commuted by President Donald J. Trump during his final days in office. He put out “Last Day In” soon after his release — a gentle song about what he dodged and what he’s looking forward to, with brief flashes of can-you-believe-my-fate awe: “I told my lawyer, ‘Boy, I love you like a daddy.’” JON CARAMANICA

“Don’t judge me, take care of me,” sings FKA twigs over a beat like a heartbeat, in a voice that’s both fragile and free; she has recently spoken out and sued the actor Shia LaBeouf over an abusive relationship. (In a statement to The New York Times, he said: “I have a history of hurting the people closest to me. I’m ashamed of that history and am sorry to those I hurt.”) But the agenda of this collaborative song isn’t just personal: The London drill rapper Headie One, with his producer Fred again.., also takes on police brutality, racism and the media, calling for “permanent changes.” JON PARELES

Two weeks ago the songwriter Jensen McRae tweeted a verse of an affectionate, finely tuned parody of how Phoebe Bridgers might sing — down to the breathy vibrato — about drive-up vaccinations at Dodgers Stadium. It was imitation as sincerest flattery; Bridgers retweeted it. Now, after 5,000 more retweets, McRae has turned it into a full-fledged song with band and string arrangements, rising to a chorus full of pandemic-era romantic angst: “What will we be to each other if the world doesn’t end?” PARELES

Jupiter & Okwess featuring Ana Tijoux, ‘You Sold Me a Dream’

Jupiter Bokondji and his band, Okwess, are from Kinshasa in the Democratic Republic of Congo; the singer and rapper Ana Tijoux is from Chile. They join forces for a racing, furious, multilingual denunciation of colonialism’s false promises across both hemispheres. Jupiter growls and Tijoux sings pointed exhortations above the band’s saw-toothed guitars and Money Mark’s throbbing synthesizers. It’s an early salvo from a Jupiter & Okwess album due in April. PARELES

Alostmen, a band from Ghana led by Stevo Atambire, named its debut album “Kologo” after the mainspring of their music: the kologo, a traditional stringed instrument that drives its songs with leaping, syncopated riffs. But its music reaches across Africa and beyond; with a horn section and an electric bass, “Minus Me” hints at both Moroccan gnawa music and Nigerian Afrobeat, while it connects Alostmen to an older generation of Ghanaian highlife with the voice of Ambolley, who has been recording since the 1970s. It’s deeply funk; it just jumps. PARELES

Billie Marten sings the autobiography of a flower as a ravenous struggle for self-realization: “Eat the sun and water up/To be someone/Can’t get enough.” Her voice is smoky and imperturbable, but the music isn’t. It starts with a restless bass riff and gathers percussion and counterpoint before blossoming into a full, chiming chorus: “I wanna feel alive.” PARELES

The boy band Prettymuch is back, recalibrated and deconstructed. Its new EP, “Smackables,” mostly leaves behind the regimented R&B of its early releases in favor of a foggier approach to feeling. “Free” is calm, sweet, a little distant — the group’s expertly hard harmonies are sprinkled throughout, but mostly its members are left to their own ramblings. CARAMANICA

“This Land,” a new album by the all-brass quartet the Westerlies and the masterly vocalist Theo Bleckmann, celebrates music’s role in protest throughout American history, mixing covers (Woody Guthrie, Joni Mitchell) and originals. The themes are often grand in scale, but the LP is also an ode to intimate connection, and our ability to strengthen each other: With intention, harmony becomes solidarity. The final track is “Thoughts and Prayers,” written by the downtown composer Phil Kline in the wake of the shooting at Marjory Stoneman Douglas High School in 2018. He drew inspiration from the words of Emma Gonzalez, a survivor of the attack, who joined her classmates in becoming a gun-control activist. Held by the warmth of the horns’ steady harmonies, Bleckmann sings in a voice that’s almost serene, sounding like his eyes are focused on a distant point: “Because all they can send are thoughts and prayers/We will have to be the change we’ve all been waiting for.” GIOVANNI RUSSONELLO

Ani DiFranco’s songs have often been quick-tongued, precisely picked, neatly balanced manifestoes and arguments that make politics personal. “Bad Dream,” from her jazz-and-soul-infused new album, “Revolutionary Love,” is different. Over a patiently bluesy groove, DiFranco sings about being blindsided by a sudden breakup, and still trying to sort out what happened. PARELES

A bassist, multi-instrumentalist, composer, organizer and mentor to countless young artists, William Parker has arguably been one of the sturdiest pillars on the New York avant-garde over the past 50 years. It can feel impossible to take a measure of his vast contributions. Well, here’s one way: Listen to “Migration of Silence Into and Out of the Tone World,” a 10-CD boxed set of entirely new material composed by Parker. Each disc was recorded with a different band or collaborator, the contents including solo piano pieces played by the pianist Eri Yamamoto and large-ensemble suites that draw together influences from Latin America, the Middle East and beyond. “Baldwin” comes from the disc titled “The Majesty of Jah,” on which Parker plays a mix of standup bass, ngoni (a bass guitar-like instrument from West Africa) and ambient electronics. He’s accompanied here by a recording of James Baldwin, meditating on how racism stained his own upbringing in New York, and by the scrabbling, searching trumpet of Jalalu-Kalvert Nelson. RUSSONELLO

How I Shot That: The Cameras and Cinematography Behind Sundance’s Narrative Feature Films