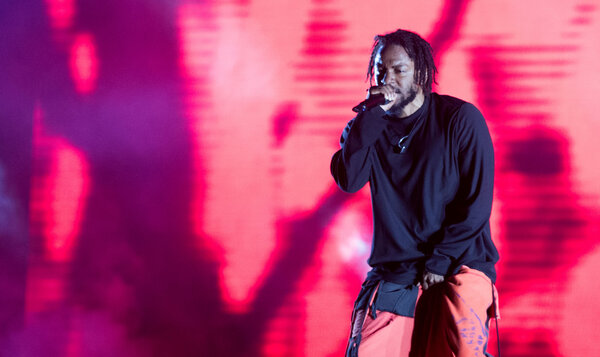 To invite Kendrick Lamar to record a guest verse is to risk being outshone on your own track — just ask Drake, Big Sean or just about every other rapper he’s shared a beat with. Busta Rhymes certainly holds his own on “Look Over Your Shoulder,” a nostalgic love letter to hip-hop from his long awaited album “ELE 2,” and drops a handful of memorable lines (“When I leave, even my shadow got a sound to it.”) But there’s a moment of sublime weightlessness as Lamar kicks his flow from second to third gear, instantly reminding us how singular his talent is, and how much his voice has been missed. Here’s hoping the follow-up to “DAMN.” is arriving soon. LINDSAY ZOLADZ

Empress Of featuring Amber Mark, ‘You’ve Got to Feel’

“You’ve Got to Feel” starts out as self-help: “You’ve got to feel to let it heal,” it declares. But as the track keeps cleverly juggling its layers of rhythm guitar, bass and beat, Empress Of — the songwriter and electronic producer Lorely Rodriguez — lets her guest, Amber Mark, pivot the song into a denunciation of capitalism and privilege, a system bigger than anyone’s private troubles. JON PARELES

“Open the door, tell them that you ready to explore,” Philly’s hip-hop surrealist Tierra Whack beckons at the beginning of her new song, “Dora” — and from there you’re transported directly into her Technicolor brain. “Dora” is a playful ode to the material world (“I like nice things/Buy me nice things”) that sidesteps cliché at every turn, simply because you never know where Whack’s rhymes are going to land: “Yes of course, I’m in Dior/I think I just might buy me a horse.” The conceptual artist Alex Da Corte has created a perfect visual accompaniment, combining humorous literalism with childlike zaniness — think Lil Wayne’s “6 Foot 7 Foot” video if it were set in Pee-wee’s Playhouse. It’s a Whack World; we’re all just visiting. ZOLADZ

This get-out-the-vote song, produced and co-written by Billie Eilish’s brother and collaborator Finneas, will be short-lived, irrelevant after Election Day, Nov. 3. But it deftly microtargets a specific demographic — the Democratic youth vote — with gospel piano chords and catchy, cheerful, pointed advice: “Young people are the biggest voting bloc/You can only make a change if you check that damn box.” It’s a goad to skip social media and fill out ballots. PARELES

In his pre-election single “Juyendo,” the Puerto Rican rapper and singer Sebastián Otero calls for attacking entrenched corruption with a machete. Produced by Otero and Eduardo Cabra (from Calle 13), it’s an eventful three minutes that encompass singing, rapping, echoes of Santeria drumming, trap percussion, salsa horns and synthesizers that buzz like an approaching swarm of hornets. PARELES

The newly formed duo Routine is a collaboration between Annie Truscott, the bassist of the jangly Washington band Chastity Belt, and Melina Duterte, the multi-instrumentalist who records as Jay Som. “Cady Road,” the first single from their upcoming debut EP “And Other Things,” moves at the tempo of a casual afternoon stroll, full of lush, chiming guitars. With Duterte helming the production, Truscott sings lead: Her voice is dreamy and low, slightly reminiscent of Helium-era Mary Timony. “Relax, it’s fine/Just give it time,” she sings, reassuringly. It’s indie-rock comfort food. ZOLADZ

Gillian Welch, ‘There’s a First Time for Everything’

“There’s a First Time for Everything” is a classic country waltz, with just a handful of chords, from an archival set of songs from the early 2000s — “Boots No. 2: The Lost Songs, Vol. 3” — that Gillian Welch will release on Nov. 13. The arrangement is minimal, tandem vocals over guitar and slide guitar. But in under three-and-half minutes, the storytelling moves from love at first sight to cheating to breakup with an economy to rival Hank Williams. PARELES

The Canadian songwriter Gianna Lauren’s feathery vocal inflections and gradual but eventually unstoppable buildup — from terse guitar pattern to full electric band with horns — clearly glance back to Feist. But she constructs her own enigma in “Closed Chapter,” from an album due Nov. 6. “Why look in the mirror?” she asks. “I know who I am.” PARELES

Xenia Rubinos, ‘Who Shot Ya?’

On her wildly creative 2016 album “Black Terry Cat,” the New York musician Xenia Rubinos interwove everyday banalities (“looking for my glasses in the lost and found”) with razor-sharp political provocations (“Brown walks your baby/Brown walks your dog/Brown raised America in place of its mom”), resulting in a rich, idiosyncratically personal take on modern American life. On “Who Shot Ya?,” a new one-off single, Rubinos brings the spirit of protest to the forefront and raises her voice against an interconnected web of social injustices. In the video’s most striking moment, she is locked inside a cage meant to evoke the immigrant children separated from their parents at the border; elsewhere, she pointedly interpolates the melody of “I Shot the Sheriff” to ask, “Who shot the sheriff when they killed Breonna in her sleep? And they still out free.” ZOLADZ

The guitarist and composer Mary Halvorson has been letting her ambition run wild with her quintet Code Girl, treating it as fertile ground for her ambitions as a songwriter, poet and bandleader. So why not ask one of her idols, the 75-year-old fusion icon Robert Wyatt, to join on a few tracks for its new album? On the opening tune, “Lemon Trees,” he sings Halvorson’s evocative but mysterious verse, inspired by the writer Lawrence Osborne, with a mix of wisdom and innocence. Around him, the band plays a carefully spooled arrangement that never comes undone, even when the trumpeter Adam O’Farrill and the drummer Tomas Fujiwara light off on an open-ended improvised duet. GIOVANNI RUSSONELLO

Craig Taborn’s Junk Magic, ‘The Science of Why Devils Smell Like Sulfur’

It can be difficult to figure out just how you’re supposed to handle the beat on “The Science of Why Devils Smell Like Sulfur,” from the pianist Craig Taborn’s new album with Junk Magic, his remarkable side project. But as twisted and aberrant as the ecosystem of sounds on this album is, that doesn’t mean you can’t move to it. In fact, this music — influenced by Aphex Twin, Autechre and Squarepusher, but spinning off in Taborn’s own directions — feels almost overwhelmingly physical. He sought to build what he calls sound chambers, moving the listener in and out of them, giving you something more to experience than just melody, harmony and rhythm. RUSSONELLO

Mouse on Mars, ‘The Latent Space’

The beat is nearly relentless but never predictable in “The Latest Space,” an early preview of an album due in February, “AAI (Anarchic Artificial Intelligence),” from the long-running Berlin electronic duo Mouse on Mars. They deploy A.I. software alongside hand drums and chopped-up vocal syllables for a track that arrives like an express train, dances awhile to a quick six-beat pattern, pauses, then resumes — barreling ahead but refusing to stay in any meter for long, like a system constantly re-encrypting. PARELES

Tucker Carlson’s net worth: The Fox News anchor is richer than you realize
Recent Posts