In a moment when museum collections are trying to integrate more women and artists of color, Julie Mehretu represents a powerful symbol of progress, the rare example of a contemporary Black female painter who has already entered the canon.

At the same time, as the Black Lives Matter movement continues to fuel a national reckoning, Mehretu is being showcased at one of the many art institutions being held accountable for an entrenched history of white male exclusionism.

It is with this unusual status — as both an agent of change and a member of the establishment — that Mehretu is preparing to take over the Whitney’s entire sprawling fifth floor with the most comprehensive survey of her career, which opens to the public on March 25.

“We’re seeing this call to reconstruction,” Mehretu said during a Zoom interview from her Chelsea studio near the museum, noting “all of this important work that didn’t get seen.” Only now, she noted, are the artists who inspired her — like Sam Gilliam, Coco Fusco, David Hammons and Daniel Joseph Martinez — finally getting their due from institutions, galleries and collectors.

“There is a deep consideration of who you show and who comes to the museum and how do you shift that,” she said. “There is a lot that has to be challenged.” 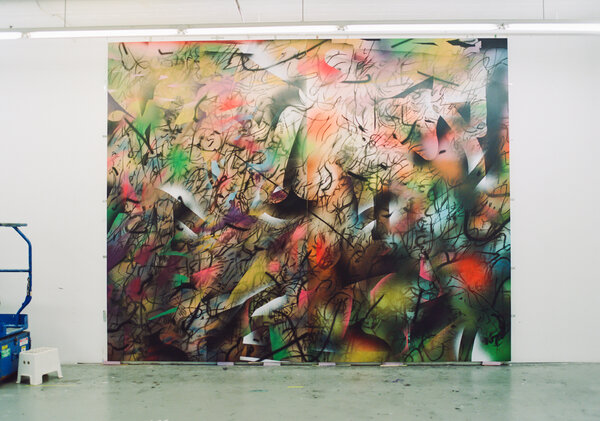 Mehretu, 50, doesn’t come across as revolutionary. She instead exudes a more deliberative approach — constantly probing, investigating, wrestling. A typical Mehretu cross-referencing conversation veers from the Tiananmen Square massacre to Le Corbusier to colonialism.

So while the events of the last year may have made Mehretu’s subject matter more resonant, the artist said she has been steeped in those issues — revolt, migration and rebellion — all along.

“That’s the reality of most people, if you’re a person of color,” she said, adding that racism “has contributed to an enormous wealth gap in this country, and if you study that, it’s very clear that there has to be a real form of redress.”

That redress includes who gets to tell your story. As museums all over the country are committing to greater diversity in whom they exhibit, hire and promote, Mehretu’s Whitney retrospective also represents an important step for two female curators of color.

Christine Y. Kim, the curator of contemporary art at the Los Angeles County Museum of Art, jointly organized the survey with Rujeko Hockley, an assistant curator at the Whitney, and presented it last year (the show was forced to close six months early because of the Covid-19 outbreak). The three women feel a sense of sisterhood, since they have a shared history through the Studio Museum in Harlem — Mehretu was an artist in residence there; Hockley was a curatorial assistant; and Kim had various curator positions.

“This powerful collaboration points not only to the significance and importance of each of their flourishing practices,” said Thelma Golden, director of the Studio Museum, “but also their groundbreaking trajectories.”

Monumental in its scale and scope, Mehretu’s Whitney show explores recurring themes such as capitalism, globalism and displacement, drawing on layers of visual images, a lexicon of hieroglyphics and ancient city maps. In light of the protests and the pandemic, the exhibition — which traveled to the High Museum of Art in Atlanta and will end its tour at the Walker Art Center in Minneapolis next October — feels especially relevant.

“There is an incredible sense of humanity in Julie’s work, creating a space, a feel, a moment for thinking about invisible bodies, migrations, lost histories, complex communication, protest and congregation,” Kim said. “The absence of bodies but the presence of humanity on pause resonates in these paintings in mysterious and intense ways.”

Hockley added that “there is a lot more to her, and to the work, than I think we have acknowledged or understood.”

The multilayered, multidimensional nature of Mehretu’s work has always made it difficult to encapsulate. Her paintings have so much going on in them — figuration as well as abstraction; swirling lines as well as filaments of color; subtle references to history as well as a clear engagement with current events.

“Julie is the painter I turn to when I want to think about how to trouble the line between abstraction and figuration, between local and global concerns, between painterly restraint and joyous abandon,” said the artist Glenn Ligon. “She’s a history painter and an Afrofuturist at the same time.”

Mehretu’s 2016 canvas, “Conjured Parts (eye), Ferguson,” for example, starts with a photograph of an unarmed man with his hands up as he faces police officers in riot gear during the protests that followed the fatal shooting of Michael Brown in Ferguson, Mo., in 2014.

The result is a fuchsia and green tangle that evokes both conflagration and confusion. Like a traffic accident glimpsed quickly from a speeding car or a subway advertisement obscured by graffiti, it requires viewers to make sense of ugly details beneath a beautiful whole.

The pandemic has informed the survey’s entire enterprise. Mehretu’s show could help reanimate a Whitney that now operates at limited capacity. During its run, through Aug. 8, the world may more fully reopen.

The lockdown changed Mehretu’s overextended lifestyle, giving her a rare opportunity to slow down, to have dinner every night with her two boys — whom she co-parents with her former wife, the artist Jessica Rankin — and to think more deeply about her goals for Denniston Hill, the artist residency she co-founded in the Catskills in 2004 with the artist Paul Pfeiffer and the historian Lawrence Chua. Mehretu remained there during the pandemic.

“I haven’t had that kind of uninterrupted time to stay in one place and get into a ritual,” Mehretu said, adding that she enjoyed living through all four seasons in the country and coming to understand “what happens when time passes.”

The virus interrupted Mehretu’s work itself, including a large diptych that will be on view in the Whitney’s gallery overlooking the Hudson, a 12-foot by 15-foot canvas titled “Ghosthymn (after the Raft),” 2019-2021. Only last fall, when she returned to her New York studio, was Mehretu able to resume work on the painting, which references the 2018 Chemnitz far-right protests in Germany, Brexit anti-immigration rallies and the 19th-century painting “The Raft of the Medusa,” by the French Romantic painter Théodore Géricault.

She also cited “levels of precarity exposed by the pandemic and the embodied anxiety during those early months” that inform the work, including swings in the news cycle, “uprisings of the summer and the basic exposure of the tropes of American exceptionalism.”

The Whitney show, which features about 30 canvases as well as 40 works on paper, will include two new ink and acrylic “Mind-Wind Field Drawings,” comprising strong, kinetic lines and barely perceptible blurred color.

Viewers will find her earliest research and drawings from graduate school and the first paintings in which she invented her signature mark making, which the artist defines as “an insistence, persistence of being.”

Born in Addis Ababa in 1970 to an Ethiopian father (a professor of economic geography) and an America mother (a Montessori educator), Mehretu moved at age 7 with her family to East Lansing, Mich., to escape political unrest in Ethiopia.

She visited the Detroit Institute of Arts, where the American artist Morris Louis’s colorful abstract stripes left a strong impression. “I tried to make paintings like that,” Mehretu said.

In the Whitney show, visitors will be able to see how Mehretu’s paintings evolved over time, growing larger, incorporating architectural plans and gaining a social and political dimension. The exhibition highlights the artist’s investigation of structural forms, like the stadium; iconography like national flags; and landmarks of recent history like the war on terror or Hurricane Katrina.

Amid an explosion of interest in Black figurative artists, Mehretu remains wedded to abstraction. But she nevertheless continues to influence artists in multiple disciplines. “There’s a magnetism in the work that draws you into her cosmos,” said the painter N. Dash. “It makes visible activity, currency and energy that transmutes the digital imagination to something legible.”

Despite the potential complications of this moment — having a seat at the table just as the table is under scrutiny — the Whitney show feels to Mehretu like something of a homecoming. As a graduate student at the Rhode Island School of Design in the late 1990s, Mehretu said, she was heavily influenced by the museum’s seminal exhibitions of Black artists like Frank Bowling and Jack Whitten, as well as by its “Black Male” show, curated by Golden.

(Her professional relationship with the Whitney started with her inclusion in the 2004 Biennial and continued with the 2017 group show, “An Incomplete History of Protest: Selections from the Whitney’s Collection, 1940—2017.”)

“It is a space where a certain sense of possibility opened up, and it has been such an important marker for me in the city,” Mehretu said.

Mehretu said she is also keenly mindful of the Whitney’s history as the target of criticism, often because of a particular work in its Biennial or, more recently, because of the professional associations of a trustee.

Ironically perhaps, the artist has arguably become part of the very system some activists are currently seeking to dismantle. She has been awarded a MacArthur Foundation “Genius Grant” (2005) and a U.S. State Department Medal of Arts (2015).

Among her major commissions are a 2009 “Mural,” commissioned by Goldman Sachs for its Battery Park headquarters, and a monumental exploration of the American West for the atrium of the San Francisco Museum of Modern Art in 2017.

And her work has joined the ranks of art-market trophies, reaching a high at auction of $5.6 million for her “Black Ground (Deep Light)” at Sotheby’s Hong Kong in 2019.

Asked how she navigates challenging the system and being part of it, Mehretu said that question should be asked of every artist in the United States. “Racism is an American problem, it is not Black people’s problem to solve,” she said. “Everyone in this country should reflect on and respond to our history of white supremacist violence. That awareness informs what I do. My work is an insistence on being here. I am here, we are here, and we are in the building.”

John Lennon: These Beatles Albums Revealed Something 'Embarrassing' About the Fab Four