Joye Hummel Murchison Kelly was the first woman to write scripts for the Wonder Woman comic-book franchise, but hardly anyone was aware of that for almost 70 years. Then Jill Lepore tracked her down while writing her 2014 book, “The Secret History of Wonder Woman,” and suddenly Ms. Hummel was a cause célèbre in the fan universe.

The late-life acclaim mystified her a bit.

“She was amazed that people made such a big deal over it,” her son Robb Murchison said in a phone interview. “She’d say, ‘It’s just a comic book.’ She kind of played it down.”

She was 19 and known as Joye Hummel in March 1944, when she went to work for William Moulton Marston, a psychologist who had created Wonder Woman three years earlier and found himself with a product that was in such demand that he couldn’t keep up.

“At first, Hummel typed Marston’s scripts,” Professor Lepore, who teaches at Harvard University, wrote in “The Secret History.” “Soon, she was writing scripts of her own.”

Ms. Hummel said she wrote the scripts for more than 70 Wonder Woman adventures (though her name appeared on none of them), helping to form what became the most enduring and widely recognized female figure in the superhero universe. Then, in 1947, shortly after Dr. Marston died of polio, she stopped. She had just married David Murchison, a widower with a young daughter; being at home for that child, Ms. Hummel thought, was more important than her work on Wonder Woman.

Ms. Hummel became largely invisible as far as the comic-book world was concerned. Robb Murchison said that her family and a few others knew of her role, but that she didn’t advertise it. Professor Lepore, though, researching her book, came across Ms. Hummel’s name and went looking for her.

“I found her by the usual detective work,” she said by email. “Ancestry.com, online directories. I wrote her a letter, and then I called her up. She told me she’d never agreed to speak with anyone about Wonder Woman.” 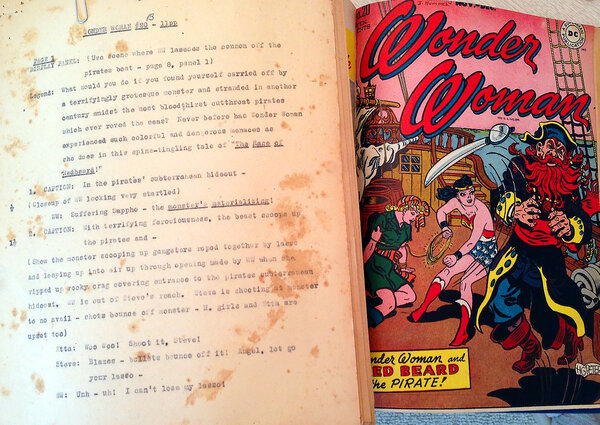 Professor Lepore’s book brought Ms. Hummel overdue recognition. Mark Evanier, a noted comic-book writer and historian, helped arrange to bring her to Comic-Con in San Diego in 2018 to accept the Bill Finger Award for Excellence in Comic Book Writing. (Mr. Finger, too, was late in being recognized for his accomplishments; he helped create Batman but went uncredited for years.) It was Ms. Hummel’s first appearance at a comics convention.

“In all my years of Comic-Conning,” Mr. Evanier said by email, “I can’t recall another moment when the audience was so eager to give someone a long, loving ovation and the recipient was so delightfully surprised to be at an event like that, receiving one.”

Ms. Hummel — Ms. Kelly since her 2000 marriage to Jack Kelly — died on April 5, the day after her 97th birthday, at her home in Winter Haven, Fla. Her son confirmed the death.

“There were 10 of these restrictions,” she said in a panel discussion at the 2018 Comic-Con. “I didn’t get in much trouble,” she added, but Dr. Marston sometimes did.

Professor Lepore interviewed Ms. Hummel by phone in 2014 and then visited her in Florida.

“She told me about her rules for writing Wonder Woman,” she said. “The plot: ‘There was a bad man and this good woman is going to stop him. You don’t admire the bad man. You admire her.’”

“She said she thought the character and the comics had gotten worse after Marston died, because of viciousness,” she added. “Everyone got vicious. That drove her nuts. Her most important rule for writing Wonder Woman: ‘You can have excitement without glorifying evil and violence.’ She wanted people to know that, as a rule for everything.”

Joye Evelyn Hummel was born on April 4, 1924, on Long Island. Her father, Quenten, managed a grocery chain, assisted by her mother, Mavis Hummel.

Ms. Hummel attended Middlebury College in Vermont for a year, then switched to the Katharine Gibbs School, a secretarial school in New York, where Dr. Marston taught psychology. (“It’s closed of course now,” she told Professor Lepore, “because nobody has to be accurate now.”) Her performance on an exam in his class made such an impression that he offered her a job on his Wonder Woman staff.

“She liked his intellect, and they just clicked,” her son said. “It was like this mind meld.”

In her book, Professor Lepore wrote that Dr. Marston had thought that Ms. Hummel could help in particular with the slang of the day. But she also understood his vision.

“He was not writing just an adventure book,” Ms. Hummel told The San Diego Union Tribune in 2018. “He wanted those who read ‘Wonder Woman’ to be inspired — that the young women who read the stories would be inspired to study and enter the world and have confidence they could accomplish things. I think he felt that a woman’s touch would make the world better.”

Ms. Hummel was paid $50 per script. In August 1944, just months after she had started working for him, Dr. Marston was found to have polio. Thereafter, she shuttled from the office he had established in New York City to his home in Rye, N.Y., where he was increasingly confined. They would look over the scripts each was working on, give each other suggestions, and try to make sure that there was nothing that would run afoul of the 10-person panel that reviewed each script. (Among the panel’s members, Ms. Hummel said, was the writer Pearl S. Buck.)

Churches, too, were beginning to take notice of this alluring female character and express concern about her.

“There was always a battle of the shorts,” Ms. Hummel said in the Comic-Con panel discussion. “One of the churches: ‘The shorts are too short. We want the shorts longer.’ And Marston said, ‘I don’t want them to look like men’s underwear.’”

Ms. Hummel’s son, Mr. Murchison, said she was again a pioneer in the 1960s, when she passed a stockbroker’s exam at a time when there were few women in that field.

Mr. Evanier said that when he first called Ms. Hummel about coming to Comic-Con, “I think she thought at first it was some phone scam deal and I’d be asking her for her credit card number.” The welcome she received at the event, he said, was inspiring.

“It was thrilling to see what she meant to the women in the audience or waiting in line to meet her,” he said. “She was truly a heroine — as great in her own way as Wonder Woman — to those who understood what a career woman was up against in that era.”

Near the end of the panel discussion, the cartoonist Trina Robbins, who along with Mr. Evanier was interviewing Ms. Hummel, asked everyone in the packed audience who was dressed in some version of a Wonder Woman costume to stand so that Ms. Hummel could see how influential she had been. A wave of applause followed, and Mr. Evanier asked the guest of honor how the reception made her feel.

“You don’t want to see the writer of Wonder Woman cry, do you?” she said.

Younger's Final Season Does Everything Right That Emily in Paris Did So, So Wrong
Recent Posts