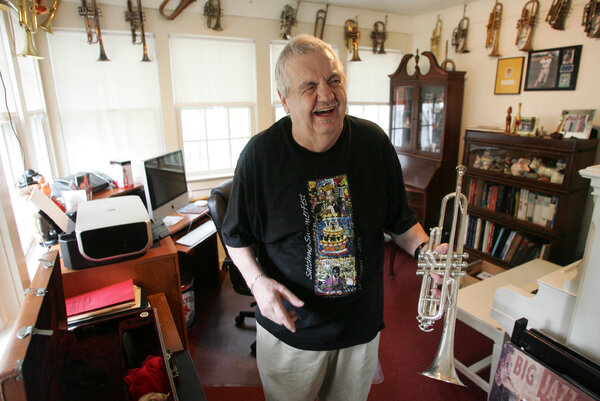 Jack Bradley, an ecstatic fan of Louis Armstrong’s who became his personal photographer, creating an indelible and intimate record of the jazz giant’s last dozen years, died on March 21 in Brewster, Mass., on Cape Cod. He was 87.

The cause was complications of Parkinson’s disease, his wife, Nancy (Eckel) Bradley, said.

Mr. Bradley first attended a concert by Armstrong and his band on Cape Cod in the mid-1950s. “I never heard anything like that,” he said in an interview in 2012 for a documentary about Armstrong, “Mr. Jazz,” directed by Michele Cinque. “My life was never the same.”

Using a Brownie, Mr. Bradley snapped his first photo of Armstrong at another performance — the first of thousands he would take, first as a devotee and then as part of his inner circle. He took pictures of Armstrong at his home in Corona, Queens; in quiet moments backstage; at rehearsals and concerts; during recording sessions; and in dressing rooms.

“With that face and his beautiful smile,” Mr. Bradley was quoted as saying in a family-approved obituary, “how could anyone take a bad shot?”

Mr. Bradley did more than take photographs. He became a voracious collector of anything related to Armstrong’s life and career: 16-millimeter films, reel-to-reel tapes of recordings and conversations, 78 r.p.m. discs and LPs, magazines, manuscripts, sheet music, telegrams, fan letters, figurines — even Armstrong’s slippers and suits, and a hotel laundry receipt that included “90 hankies,” which he famously used to wipe away perspiration during performances.

“One day Jack went into Louis’s study and Louis was ripping up picture and letters into little tiny pieces,” Ms. Bradley said by phone. “Jack said, ‘No, you can’t do that!” and Louis said, ‘You have to simplify.’ To Jack it was history and shouldn’t be thrown out.”

Mr. Bradley’s refusal to simplify brought him renown as an Armstrong maven and led to a deal in 2005 in which the Louis Armstrong Educational Foundation awarded Queens College a $480,000 grant to acquire his collection for the Louis Armstrong House Museum, where Armstrong and his wife, Lucille had lived.

The museum’s collections, now housed at Queens College, will be moved to an education center nearing completion across the street from the museum, which has been closed during the Covid-19 pandemic.

Mr. Bradley was not a salaried employee of Armstrong but was compensated for each photograph he took by Armstrong’s manager, Joe Glaser. To earn extra money, Mr. Bradley took some commercial photography jobs as well.

Dan Morgenstern, the jazz critic and historian, wrote in a Facebook tribute to Mr. Bradley that he had called him “One Shot” because “he would snap just once, in part to save film but also because he trusted his eye and timing.”

Mr. Bradley once photographed Armstrong naked from behind, in a dressing room. According to Mr. Morgenstern, Armstrong, when he heard the click of Mr. Bradley’s camera, said, “I want one of those!” An enlarged print of the photo hung in Armstrong’s den.

John Bradley III was born on Jan 3, 1934, on Cape Cod, in Cotuit. His mother, Kathryn (Beatty) Bradley, had many jobs, including hairdresser. His father left the family when Jack was 10.

A love of the sea inspired Mr. Bradley to attend the Massachusetts Maritime Academy, from which he graduated in 1958. He then left for Manhattan, where he immersed himself in jazz clubs and met Jeann Failows, who worked for Mr. Glaser helping to answer Armstrong’s mail. She and Mr. Bradley began dating, and Armstrong, seeing him with her, became convinced that Mr. Bradley was someone he could trust.

“What we had in common,” Mr. Bradley told JazzTimes in 2011, using one of Armstrong’s nicknames, “was this unending love for the music. Pops never sought fame for fame’s sake. He just wanted to play his horn. Louis had a message — a message about excellence.

“I’ve never met a man who had more genius for music,” he continued. “He could hear something once, and it was locked in his brain forever.”

Mr. Bradley was often by my Armstrong’s side from 1959 to 1971, sometimes driving him to engagements and spending hours at Armstrong’s house. In all, the self-taught Mr. Bradley took an estimated 6,000 photos of Armstrong.

One sequence of photos, taken in December 1959, shows Armstrong warming up before a concert at Carnegie Hall and jamming with his band before taking the stage, then performing, greeting friends afterward and signing autographs for fans outside the stage door.

Mr. Bradley’s focus was not entirely on Armstrong. He photographed many other jazz artists and is said to have taken one of the last pictures of Billie Holiday in performance — at the Phoenix Theater in Greenwich Village in May 1959. (She died that July.)

In the 1960s, he was a merchant marine and managed a jazz club, Bourbon Street, in Manhattan for a year. In the 1970s he was a partner in the New York Jazz Museum, in Midtown Manhattan. He also spent time as the road manager for the pianist Erroll Garner and the trumpeter Bobby Hackett.

Mr. Bradley returned to live in Cape Cod after the jazz museum closed in 1977. He became a charter boat captain, lectured locally on jazz and hosted a local radio program on which he interviewed jazz musicians. His wife taught high school Spanish.

Mr. Bradley crammed his massive jazz memorabilia collection — of which the Armstrongiana was only a part — into his modest house on Cape Cod in Harwich.

“He had it in closets, the attic, shoe boxes, sea chests, the basement, the attic, everything but in oil drums,” said Mr. Persico, who has helped organize the archive.

Mr. Bradley died in a nursing facility in Brewster. In addition to his wife, he is survived by his sisters, Emmy Shanley and Bonnie Jordan, and his brother, Bob.

Ms. Bradley said she did not mind that her marriage had been, in effect, shared with Armstrong.