Home » Entertainment » I’m a Chess Expert. Here’s What ‘The Queen’s Gambit’ Gets Right I’m a Chess Expert. Here’s What ‘The Queen’s Gambit’ Gets Right

This article contains spoilers for “The Queen’s Gambit.”

In the Netflix series “The Queen’s Gambit,” the character Benny Watts walks up to Beth Harmon, the show’s heroine, at the start of the 1967 United States Chess Championship. The location is a small auditorium on the campus of Ohio University.

Uttering an expletive, Benny gestures around the hall and complains about the conditions, noting that the best players in the country are competing, and yet the venue is second rate, the chess boards and pieces are cheap plastic, and the few spectators seem bored at best.

As a chess master who grew up in the era just after the one in which the series takes place, and who wrote the chess column for The New York Times for eight years, I can attest to the scene’s almost painful authenticity. Many tournaments of that era were played in odd and sometimes dingy locations. Even the U.S. championship was not immune; the 1964-65 competition was not even held.

The exchange between Beth (played by Anya Taylor-Joy) and Benny (Thomas Brodie-Sangster) reflects an insider’s knowledge of chess in the United States at the time that the show is set and is one of the many reasons that the series is one of the best and most successful screen adaptations of the game, a short list that includes the 2016 film “Queen of Katwe” and “Searching for Bobby Fischer,” from 1993. 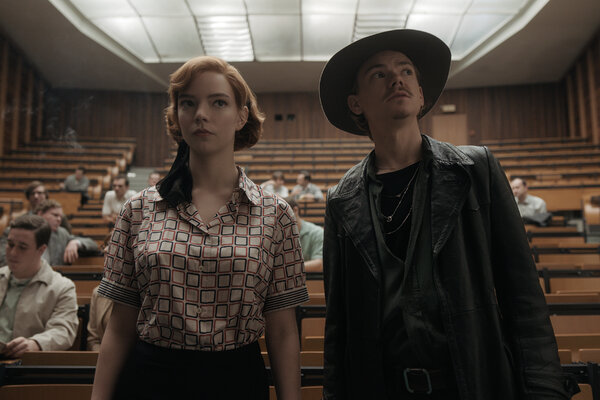 The show’s creators have also done a particularly good job at capturing and dramatizing the high tension of chess tournaments and the sometimes total obsessiveness that the game can inspire. Although it is played for comic effect, there is more than a grain of truth to the scene in which Harry Beltik (Harry Melling) hauls a big box of chess books out of his car and starts passing them to Beth in her living room, only to discover that she has already read most of them. And most skilled chess players have probably played at least a few games entirely in their heads by calling out the moves while speeding down a highway, as Beth and Benny do.

Over the decades, it has become almost a running gag among chess fans to point out mistakes in onscreen portrayals of the game. Dan Lucas, one of the senior officials at the United States Chess Federation, has kept an unofficial list for years. Among the most common transgressions: boards that are oriented incorrectly (there should always be a white square in the right corner), incorrect arrangements of pieces (such as reversing the kings and queens on their starting squares) and characters who don’t know how to move and handle the pieces.

Working with two consultants, Garry Kasparov, the former world champion, and Bruce Pandolfini, a well-known New York City chess coach, the creators of “The Queen’s Gambit” have avoided those errors. (Pandolfini even has a cameo role as a Kentucky tournament director.) The actors were trained on how to play and to move pieces like experts, which is usually done with swift, almost machine-gun-like movements. Taylor-Joy actually developed her own, more fluid style, as she explained in an interview with Chess Life magazine, which was based on her training as a dancer. In the series, she scoops the pieces up and then softly flips them over.

The games portrayed in the series are not just realistic, they are real, based on actual competitions. For example, the match in which Beth defeats Harry for the Kentucky state title was from a game in Riga, Latvia, in 1955; the last speed chess game in which she beats Benny was played at the Paris Opera in 1858; and the game in which she faces the Russian champion Vasily Borgov (Marcin Dorocinski) in the series finale was played in Biel, Switzerland, in 1993.

Despite the efforts to make the chess scenes believable, there are still areas in which the series comes up short. The most apparent is in how fast the players move during the tournaments. As one tournament director tells Beth before a competition in Cincinnati, each player has two hours to make 40 moves, which was, and still is, a standard time control for such games. But in every match, Beth and her opponents make each of their moves after taking only a few seconds to think about them. At such a tempo, they would finish their games in minutes, not hours. The speed is understandable for filmmaking because watching players sit at a board for hours, barely moving, is not riveting. But it is also not accurate.

Nor is having competitors talk during some of the games. Other than offering a draw — essentially agreeing that the match ends in a tie — players do not speak to each other during matches. It is not only considered bad sportsmanship, it is also against the rules. But several times, as in Beth’s game against Harry in Episode 2, in which she gloats near the end, and in her game against a young Russian prodigy in Mexico City in Episode 4, Beth and her opponents engage in verbal exchanges. The dialogue makes the games more understandable and spices up the drama, but once again, it is not true to life.

Though “The Queen’s Gambit” is a work of fiction and the characters that appear in it never existed, there are passing references to players who did, among them the world champions José Raúl Capablanca, Alexander Alekhine, Mikhail Botvinnik and Boris Spassky.

There is also a curious moment when Harry compares Beth to Paul Morphy, an American, who played that famous game at the Paris Opera in 1858 and who is widely considered the greatest player of the 19th century. The comparison seems like a misdirection. Despite her self-destructive tendencies, Beth does not resemble Morphy. She is closer to a female version of another champion: Bobby Fischer.

That may not be accidental. Walter Tevis, who wrote the 1983 novel on which the series is based, was a passionate and knowledgeable amateur player. In making the protagonist a woman playing a game that had long been dominated by men — and which continues to be today, though no one knows the reason — Tevis may have been expressing a hope that one day there might be true equality of the sexes over the board.

Fischer himself had been very dismissive of female players, saying in a 1963 interview that they were “terrible” and that a likely reason was that “they are not so smart.” Making Beth recall a female Fischer may have been a sneaky, and wonderful, way to send up that assessment.

The parallels between Beth and Fischer are numerous (minus her drug use, which, by the way, would have only diminished, not improved, her play).

Beth wins the 1967 U.S. championship. That was the year Fischer won his eighth and final American title.

After her adoptive mother dies in Mexico City, Beth, who is in her late teens, finds herself living alone. Soon after Fischer’s older sister, Joan, married and moved out, his mother, Regina, did, too, to pursue a medical degree. That left Fischer, at 16, living on his own.

Fischer was somewhat antisocial and one-dimensional — there was little that he liked to talk about outside of chess. Beth is more likable, a necessity for a leading character in a show, but she has some similar traits.

She learns Russian in order to be prepared to face the Soviet players; Fischer taught himself Russian so that he could read Russian chess journals, which were the best sources of information.

Unlike the other top players in the show, Beth is able to make a living at chess. Even Benny, a past U.S. champion, lives in a dingy basement. Fischer was a pioneer as a full-time professional player in the United States. Kasparov has often said that it was Fischer’s demands for better playing conditions and larger prizes that professionalized the game.

When Beth needs money to go to Russia, she asks the government to pay for the trip. Fischer’s mother once picketed the White House to try to raise money for the United States chess team.

One of the reasons Beth does not have enough money for the trip is because she has bought too many dresses. Fischer, even though he was often scratching for money, had his suits and shoes custom made.

Finally, Beth and Fischer have similar, aggressive playing styles. And when playing white and facing the Sicilian Defense, they both play the same system: the Fischer-Sozin Attack.

When it comes to how chess is portrayed onscreen, chess players are a notoriously picky and unforgiving crowd. We will pounce on any mistake. Though “The Queen’s Gambit” has its flaws, in the end the series is a clear winner.